How does Rubio’s campaign spend its money?

How does Sen. Rubio’s campaign spend its money?

“Please Put Your Tray Tables in the Upright and Locked Position”

They stand in number-ordered line at the Southwest gate just like the rest of us.

Our luxurious campaign jet from LasVegas to Reno. #2016 #SpendingMoneySmart pic.twitter.com/BYUQqCfbks

You Won’t Find Team Rubio Staying at The Ritz-Carlton

“We’re not picky about where we sleep either. You can usually find us overnighting in one of these hotels when we’re on the road: Country Inn & Suites, Courtyard, Doubletree, Embassy Suites, Fairfield Inn & Suites, Hampton Inn, Hilton Garden Inn, Holiday Inn, Marriott, or Sheraton,” says Team Rubio.

Team Rubio takes advantage of rideshare services like Uber and Lyft. According to Team Rubio, from July to September they used Uber a whopping 330 times.

According to Open Secrets, Rubio’s campaign gave back $120,000 in excess donations.

Sen. Marco Rubio’s (R-Fla.) presidential campaign has given back more than $120,000 to individuals who donated more money than the campaign could accept under federal regulations during the second quarter of this year, according to a Sept. 10 letter from the group’s treasurer to the Federal Election Commission.

The campaign issued refunds of between $3.05 and $10,000 to 50 individuals whose contributions came to more than the federal limits. The largest refund of $10,000 went to Ernest Semersky, who owns a Porsche dealership in Highland Park, Ill. Individuals are capped at giving $2,700 per election – primary and general – to a federal candidate committee. The FEC wrote to the campaign on Aug. 6, pointing out that about 90 individuals appeared to have given too much.

Getting the Most Bang for Their Buck

PACs aside, Rubio’s campaign has raised more than $24 million, 94% of which came from individual contributions. Team Rubio seems to be putting those dollars to good use. 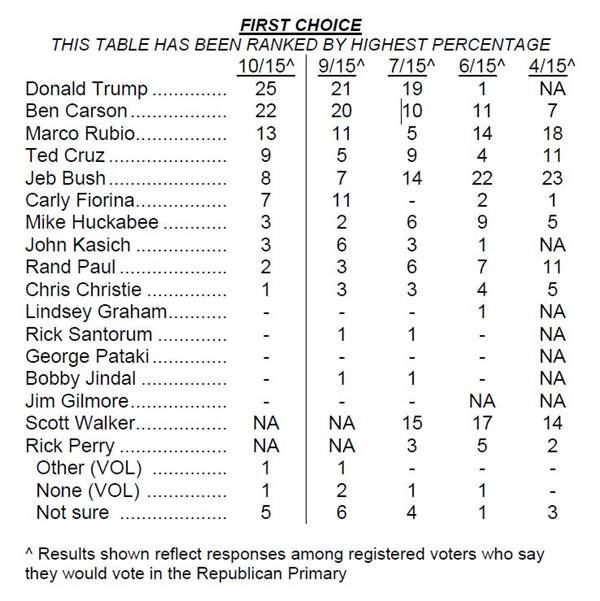 Fox News tagged along with Sen. Rubio for a few days to get a taste of campaign life.

Rubio is running TV ads here in NC. So is Jeb Bush.

Presidents Guiliani and Gingrich would probably warn about putting too much stock into polling this far out from the election anyway.

35%, actually. Which is higher than Trump has hit in the RCP averages so far.

It’s NBC, which has been under polling trump all along. As compared to the average of all the other polls anyway.

One thing to watch out for when studying these reports – number of paid staff is often misleading. There is no universal pattern in how many staff work directly for the campaign and how many actually draw their paychecks from a consulting firm or other vendor. Some are entire or partial staff on the lower end, or individuals being paid through a personal corporation or owner/operator firm at the higher end.

Rubio might be running lean staff wise. Not saying this in particular is wrong. Just pointing out a wrinkle.

According to Open Secrets, Rubio’s campaign gave back $120,000 in excess donations. […]
Individuals are capped at giving $2,700 per election – primary and general – to a federal candidate committee. The FEC wrote to the campaign on Aug. 6, pointing out that about 90 individuals appeared to have given too much.

If #TeamRubio is truly “Watching Donor Dollars Very Closely”, how come they didn’t catch any of these FEC-violating donations on their own? I mean, of course they paid them back. They kind of had to, once the FEC pinged them on it. It looks like it was the FEC who was “Watching Donor Dollars Very Closely” here, and whose rules likely required that the money be returned. I’m not sure why that’s something to brag about.

I don’t really mind Rubio that much (he’s better than Jeb! anyway), but this post strikes me as a little too cheerleader-y. I don’t even know how getting pinged by the FEC for accepting donations in excess of Federal election limits gets turned into a “look how good he is with money!” brag.

“…but this post strikes me as a little too cheerleader-y.”

Good for you Amy.

I live in Florida and have mixed feelings about Sen. Rubio. As for his “lean” campaign this may be a result of when he was accused by “Chain gang” Charlie Crist during the 2010 senate race of using the Republican Party of Florida’s credit cards way too many times for personal items. Who knows!

The best thing for me is that if Rubio can deny JEB! the nomination I will be a cheerleader for the senator.