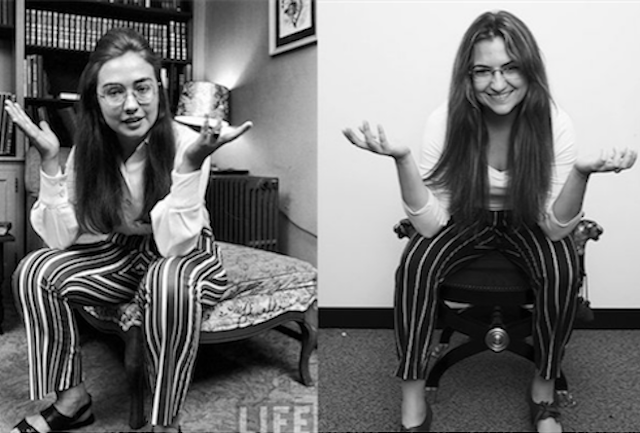 *I hate myself for using that word.

Hate it or not, though, it’s happening. This week Hillary Clinton’s campaign pushed out a list of 5 “DIY Hillary Clinton costumes” guaranteed to make your Halloween a little more…egalitarian? Search me.

You can choose between “Park Ridge Hillary” (white collared blouse and plaid jumper) or “Hipster Hillary” (striped pants and glasses) or “Cold Shoulder Hillary” (a weirdly appropriately-named combination of a cut-up turtleneck and red lipstick)—and away we go!

I’m all for campaigns pushing different or even silly PR lines, but here’s the thing about Halloween, guys—they’re probably making fun of you.

Don’t get me wrong: I’ve seen more than a few Reagan/W. Bush/Washington/Lincoln costumes in my day, worn by people who weren’t actively making fun of Texas accents or powdered wigs. More often than not, though, all we’re doing with these costumes is lobbing up a funny on the way to the bar for a round of jagerbombs.

Please don’t make me say more about this. 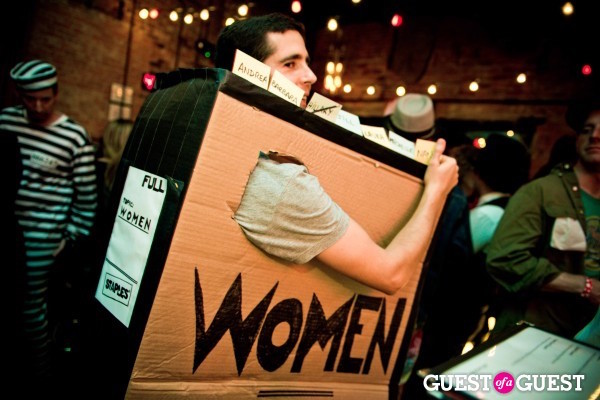 Need I even mention the entirety of this 2013 listicle from Buzzfeed?

(Please tell me you get it.)

That being said…anyone want to be the “Cold Shoulder Hillary” to my “Texts from Hillary?” I think I can do the facial expression justice.

Wait, this is REAL? I saw the headline somewhere else and could have sworn it was a parody. No, wait. It still is a parody. LOL

Rich Little always said that the key to impersonating Johnny Carson was not to be too funny.

The key to impersonating Hillary Clinton – don’t be too pretty.

How about a Hillary mask with an orange jumpsuit and shackles?

I have an even better idea for passing out candy. Wear the Hillary mask and when two kids come to your door take 3 pieces of candy out of one’s bag. Put 1 piece in the other kid’s bag and keep 2 for yourself.

I’m Ready for Hillary… to be indicted!

Halloween used to be a nice little innocent holiday for children.

First the scaremongers made it seem to dangerous to go trick or treating door to door after dark. Then the wiccans, the homosexuals and the perpetually adolescent made it another excuse to party.

What they didn’t put out a psycho bitch Hillary with crazy eyes? Orange pant suit Hillary with the words prisoner on front and back. How about latino gang member Hillary v with 4 tear drop tattoos one for each benghazi deaths?

Well, if you just wanted to just put a few tattoos to represent the very latest deaths 4 would do, but if you were to have one tattoo for every death she was involved in you would have to tattoo her all the way down to her behind and maybe a bit further.

“The-what-difference-does-it-make” Hillary costume comes with the heart cut out.

The “What Would Hillary Do” (WWHD) costume comes with a 3 AM phone call and a cackle ringtone.

What does the “I did not send or receive any emails marked as classified” costume come with? A free server for you basement?

On a side note, I ordered a costume the other day and there was a mix up. They sent me a Hillary top and a Monica bottom. I said to myself, “What difference does it make,” put it on, and went to the Bernie Sanders rally dressed as intern socialist.

To be fair, Halloween costumes are supposed to be scary, and I have to admit that the Hillary costume IS scary, so in that sense it’s successful.

A Hilloween? Is there anyway to unsee this? I’m going to go throw up now. Plus I thought a witch’s costume would be sufficient for a copy of that creature.

EVEN vertical stripes could not tame those Thunder Thighs. And she was at her maidenly optimum…!!!

Well, Pierre, any robes purchased for that witch would soon be total rags as a result of trying to force them on those humongous Thunder Thighs. As you can see from the photo, even at her maidenly optimum they were painted on. It was no accident that the invention of pant suits came about shortly thereafter.

Hmmm…. THAT would explain so much!

“There are no coincidences in history.”

I have to admit I love your posts Rags! You always put a smile on my face. I’m afraid I don’t remember the mu-mu, I had to look it up to see what it was. I think Hillary was wearing a mu-mu on the beach with Bill awhile back while walking their dogs at their rented house in Amagansett, New York. The mu-mu Hillary was wearing looks like a cross between a nightie and a 500 pound potato sack.

…Creations By Omar (the tent maker).

I believe the affect of those Hillary costumes will show up in nine months when no babies are born.

Internet. Yours. You won it.