Even in Israel, when seconds count the police are only minutes away. 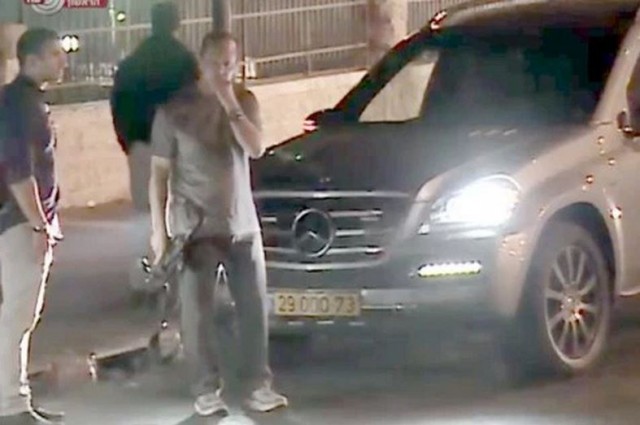 It’s far from clear that there is a “Third Intifada” in Israel.

But there are multiple attacks daily by Palestinians, usually involving rock throwing and knives.

It’s a very personal type of attack fueled by incitement in Palestinian and some western social media over the Temple Mount / Al Aqsa Mosque.

Many of the rock attacks on the roads are attempted lynchings, hoping to stop the vehicle in order to kill the driver, such as this incident:

Lev Ohayon was on her way to work in Jerusalem from her home in Tekoa, when she was ambushed by a group of rock-wielding Palestinians, who shattered her car’s windows. One of them began to beat her, while trying to pull her out of the vehicle.

“I saw my death,” she told a Channel 2 news team from her Jerusalem hospital bed, where she is being treated for light wounds – which could have been far greater had Lev Ohayon not managed to accelerate and tear away from her attackers. Rather than wait for an ambulance to arrive at the nearby checkpoint, as she was instructed to do when she phoned for help, she drove home, where paramedics whisked her off to the hospital.

A reporter in the area almost met the same result, but he was armed and his warning shots drove the lynch mob away:

When [Josh] Hasten approached the same area shortly afterward, he was still unaware of what had happened to Lev Ohayon or the seven other cars that had been struck by rocks and concrete during the same assault, emanating from Sur Baher.

But he too smelled mortal danger.

“I was sure they were going to kill me,” he said, recounting the events as they unfolded.

“I saw 40-50 Arabs running fast towards my car with large rocks and concrete blocks in their arms. I was the only car on that stretch of road at that moment, and I considered attempting to speed up to get away from them. But I didn’t think I had time to get out of there.

“So, I took the gun out of my holster and held it up so that they could see it through the window. At first, this worked, because they all paused for a second as soon as they saw it. That didn’t last, though, and they resumed running towards me.

“When they were about 10 meters away, I opened my window and shot in the air. The shot sent them running back into the village. So then I floored it to the checkpoint.

Israelis appear to be getting that message. While weapons carried by the military are common in Israel, it is difficult for non-military citizens to get gun permits. And when they have them, the guns generally are not carried outside the home.

In the wake of the murderous rampages by knife and rock-wielding Palestinians, Israelis are being called to carry their weapons for self defense.

The Times of Israel reports on a statement by the Mayor of Jerusalem:

Jerusalem Mayor Nir Barkat on Thursday encouraged all Israelis with a gun license to carry a weapon with them at all times in order to counter a recent wave of Palestinian attacks.

The mayor’s call to arms came after several weeks in which the capital was rocked by several stabbing incidents as well as rock and Molotov cocktail attacks. The focus of violence was in and around the Old City and its Temple Mount compound.

In an interview with Army Radio, Barkat responded to footage of himself walking around the city at night carrying what at first glance appeared to be a rifle, asserting that reports “simply got the facts wrong.” [waj note – see Featured Image]

The gun in question, he said, was a Glock 23 handgun, paired with a pistol-to-carbine conversion kit that “makes the gun more accurate and thus safer.” 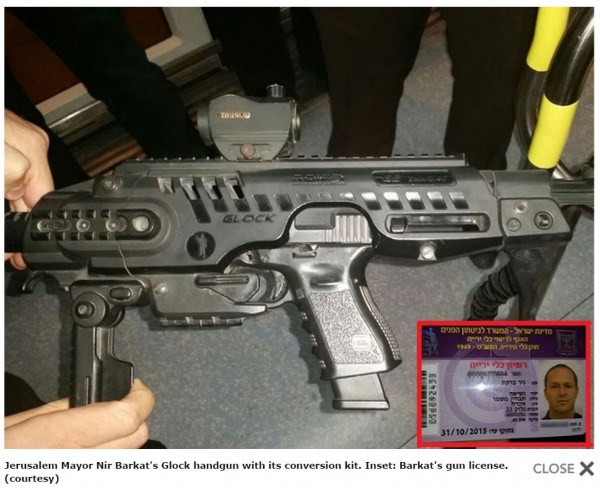 (Image via Times of Israel)

Via The Muqata further quotes the Mayor:

Nir Barkat joins the call for residents who are licensed to carry weapons to do so on a daily basis.
“One advantage that Israel has is that there are quite a few ex-members of military units with operational combat experience,” Barkat said. “Possessing weapons increases the confidence of residents, who know that in addition to police there are many people who are not afraid to intervene. If we look at the statistics in Jerusalem and elsewhere, we see that aside from the police, civilians carrying weapons have foiled terror attacks. They will increase the likelihood of fast intervention.” -litvshe 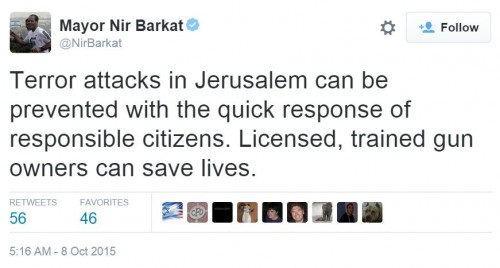 Mayor Barkat is no stranger to citizen self-defense, having participated earlier this year in the take down of a knife terrorist:

Others are calling for more citizen self-defense, via The Muqata:

Deputy Security Minister MK Eli Ben Dahan: Carry Your Firearms
Deputy Security Minister MK Eli Ben Dahan said minutes ago at the site of the terror stabbing attack in Tel Aviv: “I call on all citizens, everyone with a licensed weapon, to carry it with them. We must ensure that every terrorist is shot. A person [terrorist] who goes to a construction site, and decides to start stabbing people with a screwdriver — its very difficult to pick him out [as a suspect before he carries out the attack]. Any person [terrorist] that decides tomorrow… or in an hour or two [to attack], needs to know they will be shot. Anyone who has the ability and knowledge to properly use a weapon and doesn’t have a problem keeping it safely in their homes [when not in use], should carry their weapons. It would be helpful” (NRG)

The knife attacks are being encouraged by videos like this one:

Note that the reporter shot in the air, as Slow Joe advised. Had this happened in the USA he would have shot at his attackers, and probably hit at least one of them, and the world would be a slightly safer place. But in Israel this would have got him in a world of legal trouble, so he shot in the air, and the terrrorists retreated safe and sound, ready to kill the next person. They knew they were risking nothing, that nobody would dare shoot at them, because the legal establishment (which is independent of and superior to the elected government) is on their side.

Law abiding gun owners can save lives? Are you sure I’m reading that correctly?

Then there are those who will get one of these 🙂

You can own a gun AND you can have your very own 70 pound velociraptor as a body guard.

If you commit to the training on one [or two] of these and doing your fencing/gates right, your house property will NEVER be violated.

We need to reestablish our militia with all members carrying concealed weapons and ready to confront mentally ill murders or Muslims.

Read Day of Wrath to see what we need to prepare for.

Just drop the “licensed” part, and you’ve got the formula.

Licensing is just a means to collect money. “Certified” is all you really want.

Also, in Israel, it’s a way for the legal establishment to keep guns away from the Wrong Sort of People, who are generally those most in need of a gun. These people are deliberately left defenseless, and then when they are killed there is must tutting and commenting about what a shame it is.

Just a note the little modification that the Mayor had to his gun, is highly restricted here in the U.S. You have to have special permission from the BATFE to own one, even then it would be illegal to carry in most places. Because it supposedly turns the pistol into a “short barreled rifle”.

Only now is the mayor of Jerusalem calling for people to arm themselves? Licenses? Oh, please! If the American settler had had to wait for the government to issue gun licenses, the West would never have been won. (Considering the state of CA, maybe that’s not a bad thing)

What’s this about shooting into the air and letting killers live to kill another day? #ArabLivesMatter. #IsraeliLivesDon’t.

A high percentage of the population has served in the IDF so they know how to handle guns. Their minds get trained and focused by full time service. Ultra religious people are not living in the real world and depend on them for their secluded lives.

The “ultra–religious” likely consider themselves as the cohanim. Leave them alone, but they must work. No welfare.