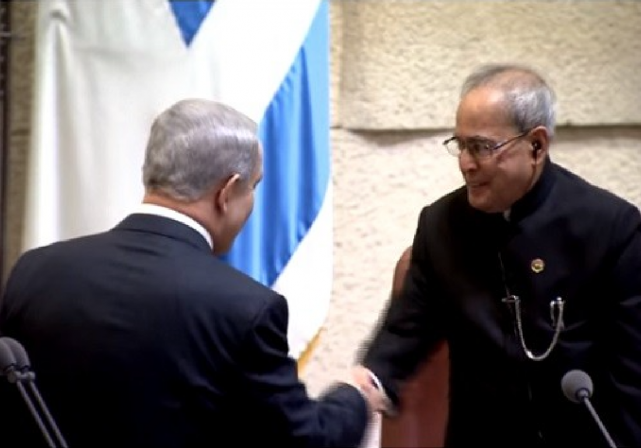 As Indian President Pranab Mukherjee’s 3-day historic visit to Israel comes to an end, Israel’s foreign policy is being redefined. During the first ever visit by an Indian head of state, both countries signed a series of agreements aimed at improving cooperation in commerce, technology and education.

India, traditionally seen as a strong backer of the “Palestinian cause” at the world stage, has sharply changed its diplomatic position since Prime Minister Modi took office 17 months ago. Since his election, India has consistently voted against or abstained from anti-Israel resolutions tabled by Arab countries at UN and other international fora.  India’s recent pro-Israel stance has angered many Palestinians.

During Indian President’s brief visit to the Al Quds University in Ramallah angry Palestinian demonstrators occupied the campus to register their protest. India, under Prime Minister Modi’s leadership, wants to further intensify cooperation with Israel, despite continued objections by the Palestinian Authority as well as Muslim and left-wing groups in India. Prime Minister Modi is also expected to visit Israel next year. Indian Prime Minister sees Israel as a key global partner in his drive towards a modern and prosperous India.

Addressing the Israeli Knesset on Wednesday, October 14, the Indian President emphasised the need for closer cooperation between both the countries in the field of technology, research and higher education [Jerusalem Post, October 15, 2015]:

The Indian president [addressing the Knesset] said his nation “always appreciated Israeli innovations in the field of agriculture, the kibbutz system and the remarkable achievements of your scientists and engineers,” saying drip irrigation is widely used, and the country is looking to develop efficient technologies for water management and cleaning rivers.

Mukherjee called to develop ties between Israeli and Indian universities and to integrate “Israeli innovation and Indian engineering and scale,” to create markets and jobs in both countries. He spoke of his country’s association with the Israeli defense industry.

He added that “whenever the Nobel Prizes have been announced, we have often seen the names of awardees who have studied in Israeli universities. As friends of Israel, we rejoice in the success of your scientists.”

Israel’s growing ties with India must also be seen in the larger context of Israel’s increasing engagement with Asia. In past decade, Israel has forged strong economic and geopolitical alliances with Asian countries. Traditionally Europe and U.S. have been by far the biggest trading partners for Israel, but the Asian countries have picked up substantially in recent years. Last year Asia became the second largest trading block for Israel, second only to European Union. A decade ago Asia amounted to only 15% of total Israeli exports. Today about quarter of all Israeli exports go to Asia.

In terms of numbers, China is Israel’s biggest trading partner in Asia. Annual bilateral trade between the Israel and Chia is roughly $11 billion, compared to about $5 billion worth of bilateral trade between Israel and India. However, Israel has broader ties with India that include research and development in sensitive areas like defense technology and cyber security.

Not only India, Israel has been successful in winning over Japan as well. In July 215, London-based weekly The Economist confirmed that Japan’s Prime Minister Shinzo Abe was “keen to forge closer ties with Israel” and “soften [Japan’s] traditionally pro-Arab stance.”

To offset slowing economic growth in Europe and EU’s increasingly hostile attitude towards Israel, the Jewish State is increasingly engaging with Asian economies. Asian giants like India and China have discovers Israel as a destination for cutting-edge innovation, necessary to make their service and industrial sector competitive in a globalizing market.

If India continues to follow the line established by Prime Minister Modi, they will quickly leave the poverty, corruption, and squaller of their socialist past.

Israel HAS to move away from Europe and the US as far as trade connections. Europe is intrinsically hostile to Israel, and it will only become worse based on the invasion of Europe by Muslims. The US is not being invaded by Muslims, at least not openly, but the regime is definitely hostile. Asia is the only likely trade partner left.

Israel and India share a common potential enemy as well. I don’t blame Israel for looking to Israel’s best interests. Too bad we have an Anti-American, Anti-Israeli in office now.