A new chapter…and a new excuse for violence 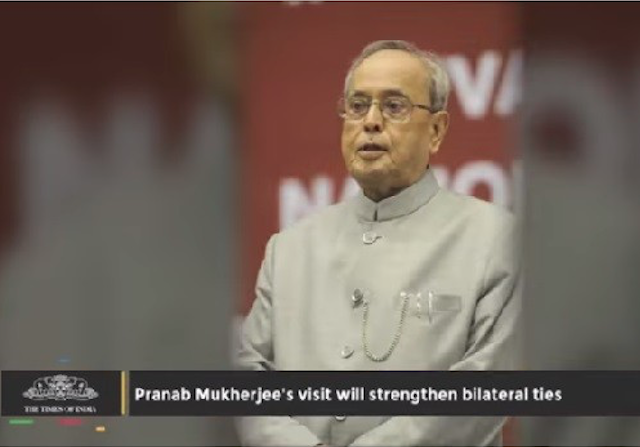 India-Israel diplomatic relations will turn a new chapter with the Indian President’s historic state visit to Israel. Pranab Mukherjee became the first Indian Head of the State to visit the Jewish State. The state visit is an initiative of Prime Minister Narendra Modi’s 17-month old government that seeks to strengthen commercial and diplomatic ties with Israel.

However, right at the onset the Indian President’s visit was marred by a controversy, when media reports surfaced early this week that Mukherjee reportedly quoted Mahatma Gandhi during his stay to Jordan, saying, “Palestine belongs to the Arabs in the same sense that England belongs to the English and France to the French.” Jerusalem Post reports:

Speaking in Amman at the University of Jordan, [President Mukherjee said],“India’s traditional support to the Palestinian cause remains steadfast and unwavering while we pursue strong relations with Israel. Our bilateral relations [with Israel] are independent of our relations with Palestine.”

In recent months, New Delhi, which has pursued closer ties with Israel since the election of Narendra Modi in 2014, has abstained – rather than vote against Israel – in three UN votes, leading to concern among some Palestinians that they were losing a reliable ally.

The Indian president seemed intent on dispelling that notion in his address Sunday, quoting from Mahatma Gandhi in saying, “Palestine belongs to the Arabs in the same sense that England belongs to the English and France to the French.”

If President Mukherjee was trying to placate the Arab public opinion with his sympathetic statements, it did not work. According to Arab media, hundreds of angry Palestinian protesters occupied the campus on Tuesday, October 13, 2015 during Mikherjee’s brief visit to Al Quds University, Ramallah.

President Mukherjee, a 79 year-old veteran politician of India’s Congress Party, took office three years ago, with support of his party’s considerable strength in Upper- and Lower Houses of Indian Parliament. Since then the left-leaning Congress Party has been virtually wiped out of India’s political scene. Congress Party historically supported Yasser Arafat’s PLO and a segment in the party still holds on to the outdated allegiances from the Cold War era.

Regardless of the Indian President’s differing opinion on the ‘Israeli-Arab conflict’, there is great support at home for Prime Minister Modi’s pro-Israel foreign policy. Besides the political support for Israel from Hindu-right within Prime Minister Modi’s own BJP-led alliance, there is wide-based support and admiration for Israel amongst the country’s youth, who see Israel as a land of start-ups and cutting-edge innovation.

During the President’s visit, both countries are set to sign important agreements aimed at improving bilateral cooperation in fields such as trade, technology, research, and education. India also seeks a framework for acquiring Israeli technological know-how in the fields of water management and energy generation.

Since India established full diplomatic ties with Israel some 23 years ago, India has turned into a reliable and valued partner of the Jewish State. The Indian President’s visit marks a new beginning in Israel-India relations and a big landmark in Israel’s successful pivot towards Asia. In the past decade, Israel has increasingly looked towards Asia and forged strong ties with Asian giants like China, India, and Japan.

In recent months, New Delhi, which has pursued closer ties with Israel since the election of Narendra Modi in 2014, has abstained – rather than vote against Israel – in three UN votes,

Not good enough. If India wants Israel to be a friend, why would it not treat Israel as a friend, and vote against these resolutions? Abstaining is not the act of a friend, it’s the act of someone who is really an enemy but wants to be polite. It says “I really agree with this attack on you, but I don’t want to upset you so I will be silent”. If someone tried that on me, I would refuse to deal with them or accept their so-called “palm branch”. If you claim to be my friend you will stand with me and not be ashamed.

I totally agree with you, and appreciate someone else saying they same thing. I just posted this in the comments at ibnlive.com on an article about this same topic.

I appreciate the Indian PM coming to Israel to improve ties, and I also appreciate all of the pro-Israel comments in this thread, but I am honestly sick and tired of fair weather friends. What I mean by that is that Israel should respectfully turned the Indian PM back at the gates, with a simple response. “We appreciate your recent support, but feel it is not enough. You failed to speak out against terrorism, something your country has experienced, when among the Palestinian terrorists that you have influence over. You recently abstained in the UN on several resolutions that could be considered anti-Israel, but again, this is not enough. A true friend would vote against. Until you, or any other country that calls itself our friends show their actions with words, we will not welcome you, will not meet with you, and will not provide photo ops for you on our soil. If our friendship is to remain in the closet, all interactions can continue in that manner.”

It is crazy how the world wants Israel tech, Israel’s science, and medicines, but won’t stand behind the country when their leaders know the truth about what is really happening, for fear of offending the Muslim world. We know Israel didn’t bomb children last year, and we know they aren’t executing them now.

Oh, and Gandhi was also a Nazi supporter. Who cares what lies he told about “Palestine”? Mukherjee can join him in Hell.

Milhouse, now tell us what you really think. . . .

I haven’t commented at this site since one of the contributors here wrote some unappreciated comments about the US belonging to a particular religion and type of people. However, I am compelled to clear up some things.

Ghandi did write the above quote in a British newspaper of the Church of England in 1939. In the same piece, he wrote that Jews in Europe would be saved from Hitler if among them rose a nonviolent leader. Well, all I can say about that is it is lucky for Ghandi and India that they were dealing with the relatively less brutal British.

For a better understanding of Ghandi’s writings on Jews in that era, spend some time looking at http://www.gandhiserve.org/information/writings_online/articles/gandhi_jews_palestine.html .

Ghandi was a man with some strong ideas, though they were not unique historically or even in his time or place. His magic resided in an ability to demonstrate a selflessness and simplicity that has a particular appeal among Indians who have long romanticized such behavior. Because of this simplicity, which was nearly unique in his time (remember, this was the rise of fascism time), he came to represent a large nation.

Of course Ghandi was often wrong. Just read his books. They are full of wild ideas that make little sense. But together with a British enemy-turned-partner, he accomplished much. To him, though, his biggest challenge was trying to keep India unified. And if he had lived, he surely would have considered that failure to be his worst regret.

Ghandi was a horribly flawed man because he jumped into pursuits with so much excitement and less consideration or study. He jumped into the cause of keeping India unified with such passion, that he chose to try to appease Indian Muslims almost all the time. That is why he and many other Hindu Indian leaders of the time opposed a Jewish state.

Ghandi was not a Nazi supporter. His British patriotism was a conflicted issue. In the Boer Wars and WWI, he actively supported the army and even formed an ambulance corps and joined. By WWII, with India clearly on the verge of home rule, he was much less sure of which side to take. Many Indian colleagues of his wanted to openly support the Nazis, but most were much more conflicted and did little to help either side.

Before World War II, there had never been any real sign of anti-Semitism in India, despite a history of 2,000 years of Jewish presence there. Hindus, the dominant religion, generally espouse a belief that all religions are accepted, and they only ask that each person practice his own religion faithfully. India before World War II was the only place in the world in which anti-Semitism was truly not known.

There was shock in India when the Mumbai terrorist attack targeted Jews there. Jews have traditionally been well-tolerated, as are the Parsis. Hindu extremists target Christians mostly because they evangelize.

Gandhi was a racist and a nitwit. I’m not fond of tossing around the first word but it is justified.

The arab-Israeli conflict is more accurately called the arab ambition to exterminate the Jews and annihilate Israel, the sovereign, indigenous, ancestral, homeland of the Jews.

In India’s honor, restaurants across the Jewish state should display the sign, “New Deli.”

We want to support u , n we will support u ,
But not in a way u want it to happen,
It will take time n proceed step by step ,,

Let me tell u somthing ,,
Here is a very strong perception in India n world about u that u r doing wrong .
n I think our president Mr.Mukherjee is also think that bcz he is from congress(muslim biased party).

There are around 6 million muslims in palestine n they r like pain in yr ass from decades making very serious trouble for u,,u r nt able to handle,

In India there are 172 million Muslims(same type) r there who r ready to do any thing to oppose u n our govt move towards you, they cn create messy n tense situation in our country n they will do that.

So try to thik from other view also nt only by yr point of view,,
Even then Modi will support u n he will try to swim in opposit direction of flow ,

And Sir Modi is not coming in yr country just for those stuff u mentioned above, we r getting all that stuff just by paying money to u,
bad comment.

He & we(majority Indians) will stand with you not for those stuff u mention above but bcz we respect u, we like u ,n cn feel the trouble through which u r going, bcz we r also in same condtn , &
Modi sir is man of his words he will do whatever he can do for ur country without making trouble in our own country.

It is a positive step that he is coming ,things will go in positive direction ,i hope soo.
so plz don’t criticise him.