. . . and planning the “fundamental transformation” of Canada? 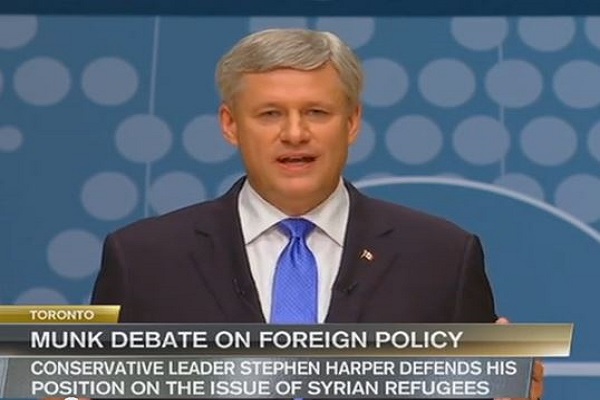 While most of us have been engrossed in the American election saga, our neighbor to the north is preparing for an Oct. 19th election that may be infused with some imported drama.

As next week’s election draws near, news is that conservative Stephen Harper is going to be replaced with the son a former leftist Prime Minister:

If current polling is to be believed – and recent election upsets in the UK and Israel have taught pundits to take polls with more than a pinch of salt – then Harper will not hold on to government. After languishing in third place for much of the campaign, the Liberals, led by Justin Trudeau – son of former prime minister Pierre Elliott Trudeau – seem set to return to power.

The victory will be particularly sweet here in Ajax, where four-term Liberal MP Mark Holland was routed in 2011 by Chris Alexander, formerly Canada’s ambassador to Afghanistan and now a immigration minister in the Conservative government.

True to form, President Obama cannot resist trying to exert some meaningful influence. Since he is apparently unable to do so in the Middle East, where it may actually help our nation, there are reports he is attempting to sway the Canadian vote.

But Judi McLeod of the Canada Free Press has been documenting how Obama is planning the “fundamental transformation” of Canada by taking down Harper’s government and bringing to power a progressive majority assembled from Canada’s Liberal Party and New Democratic Party (NDP), an affiliate of the Socialist International.

In a dispatch earlier this year, McLeod provided the facts about the interference of Obama campaign operatives in the Canadian elections scheduled for October 19. “In Canada, Obama’s campaign team is guiding the election campaigns of both the Liberals and the NDP,” she wrote. She urged the Harper government to investigate.

She explained why Obama is targeting Canada: “To the U.S., Canada is the country next door, to Obama it’s home of the architects of the maligned Keystone XL Pipeline and home to the world’s Number One elected defender of Israel Prime Minister Benjamin Netanyahu.”

Indeed, for the last seven years, Harper has not only been supporting Israel, but functioning as the leader of the Free World in the face of Obama’s deal-making with America’s enemies and adversaries. In 2014, at the summit of G20 nations, Harper famously told Russian President Putin that he needs “to get out of Ukraine.” Putin replied with a lie, saying the Russians weren’t in Ukraine.

Minimally, the specter of Obama looms over this election cycle as evidenced by the recent candidate debate over foreign policy:

Mulcair took Harper to task for fighting with U.S. President Barack Obama over the Keystone Pipeline.

“It’s an old saying that you catch more flies with honey than with vinegar,” Mulcair said. “You are pouring vinegar all over the Americans.”

Harper said that he has worked “productively, overall” with Obama and the U.S. during his reign as prime minister. Turning the debate around on Mulcair, Harper attacked him for being against military action in Iraq.

“Seriously, if you want to poison the relationship with the Americans… pulling out of ISIS coalition” would do it, Harper said.

Enjoy this sample of gravitas during elections, via the video of the recent Munk foreign policy debate between all three Canadian candidates.

Should Harper fail in this election, Obama will likely be the root cause by either direct interference in the election or the White House’s toxic foreign policies. Or, perhaps both!

Given how successful he has been messing with Israeli elections and in the last couple of midterms here, we should all be glad to hear about this.

Should Harper fail in this election, Obama will likely be the root cause by either direct interference in the election or the White House’s toxic foreign policies. Or, perhaps both!

There seems little reason to assume that he will suddenly, after seven years of futility, become any kind of factor in international affairs.

Obama’s gang will likely fail. Some review: the US is annexed into Mexico, Israel is no longer an ally, European leaders think Obama is of unsound mind, and now Canada will no longer be an ally.

Take a step back and realize the situation we are in. Now think about the GOP establishment: we are living in the Weimar Republic.

All that’s missing is the hyperinflation.

Should Harper lose the election on account of Obama’s ‘world-government’ tinkering, could he not (before inauguration of his successor) use it as a casus belli and declare war on the US?

Obama is quite good at surrendering to foreign powers, and at glibly making that sound beneficial to us. I’d take my chances with a Canadian president, particularly Harper.

O’s gang, including bilayers was fomenting discontent on social media in Egypt. They are like the plague waiting to poison everything honorable. They tried in Israel, they succeeded in Australia, and they will do their best in Canada.

Where is this ‘Canada’? Oh yeah, that’s the huge country to our north that saves huge amounts of money for defense because we’re a neighbor and would defend Canada because it’s contiguous to us, i.e., to attack Canada is to essentially attack the US.

I grew up in downtown Detroit, Fort Street, on the riverfront, with Canada a quarter mile away. Those bastards were always sneaking over, stealing hubcaps, overturning garbage cans, and the like. They’re like drunken bears. And they smell like maple syrup.

HH: As a former Detroiter, there is so much to love about your comment, I don’t know where to begin!

If a Detroiter complains about others criminality , you should take them seriously, after all they invented random violence

Obama could screw up a two car funeral

Drove in Canada back in the seventies and eighties some of the worst most inconsiderate drivers I have ever seen. On the other hand most of you from the East Coast and California have never seen a considerate driver so you might not have noticed.

They’d run lights, not wait their turn at a stop sign, make illegal left turns like it was an Olympic event. I never got the ‘nice’ label.