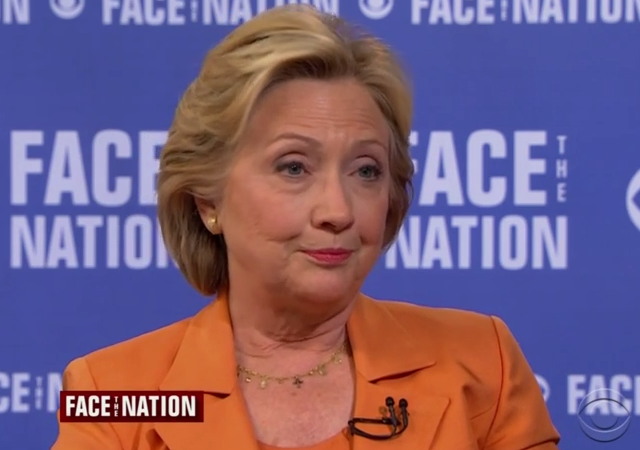 A new USA Today/Suffolk University poll shows that Hillary Clinton’s numbers have taken a dive since July, when she commanded 59% support for her nomination. This summer Bernie Sanders drew just 14% of the support of those polled, with an undeclared Joe Biden still raking in 8% support.

She’s still in the lead, but the field is spreading out—which could mean bad news for the left’s presumptive nominee.

Clinton is now viewed unfavorably by 51 percent of likely voters, and 39 percent view her favorably. That’s worse than in July, when the poll found those numbers at 43 percent to 47 percent.

That unfavorability rating could be a problem, but fortunately for Clinton, she won’t be forced to immediately face off against a more charismatic (and infinitely more likable, even for this conservative) Joe Biden until later in the year. Biden reportedly isn’t preparing for the October 13 Democratic primary debate in Las Vegas, and has given himself a little more breathing room with regards to a deadline for declaring his candidacy.

For more than two months, Biden has been studying the mechanics of what it would take to launch a candidacy. He and his team have been inundated by mounds of research and battle plans, but his original end-of-summer deadline passed without him reaching a conclusion.

Campaign managers in key early-voting states have already been identified. Dozens of major donors have stepped forward. Domestic and foreign policy advisers are waiting in the wings.

The speculation about Biden’s future has reached a fever pitch, fueled by Democrats searching for an alternative to Hillary Clinton or a backup plan in case her candidacy falters. But with every passing week, many Democrats close to Biden are hardening in their beliefs that he will ultimately decide against challenging Clinton and the rest of the party’s field.

He has stopped short of asking his advisers to actually pull the trigger on any of their plans-in-waiting, including setting up the legal structure of a campaign organization and taking steps to qualify for ballots in Michigan, Texas and other states with early deadlines.

Any movement, though, should make Clinton nervous—which is probably why she’s looking towards pop culture to help revamp her image. She’s set to appear on Saturday Night Live this weekend for a little self-deprecating…catharsis…with Kate McKinnon, whose impersonations of Clinton have earned her praise (mostly because they’re so on the nose it’s scary.)

Polls mean jack-diddly at this point.

You can pick and chose and take what you want from them.

For instance, RealClearPolitics shows that T-rump has lost about a quarter of his support.

Quinnipiac’s unfavorable/favorable shows that Hellary is ALMOST the most ill-thought-of person in the race. T-rump beats her.

Polls are just useless this far before an election. Even in the early states, most voters don’t focus on the campaign until about a month before the vote.

When multiple polls from different outfits show the same trend, though, it is likely correct – although the specific numbers remain untrustworthy.

When are she and Huma going to finally to appear on Face the Indictment?

What is sad is the shallowness and lack of talent in the Democrat field. Hillary who has covered up so much. Sanders who is a Socialist and very far left (left even of our own local product, Martha Robertson). Biden who flubs often. Contrast that with the wide and deep Republican field so rich in talent. It is also sad that despite all the disrespect for law and cover ups Hillary has been involved in (starting with the Rose Law Firm records) she has any support left. But then, our sadly incompetent and constitution and law rejecting President still has support. Some Democrats will support anyone with a D after their name, no matter how corrupt or contemptuous of law and rules. The D party is bankrupt on talent.

Hillary you are serial liar just like the President.
God help us if this women can scam her way into the presidency! Our nation can not take 4 more years of a liar!