When you’ve lost the media… 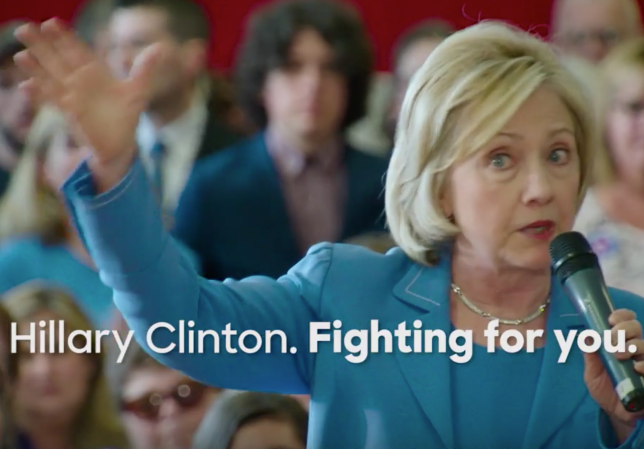 Hillary Clinton’s campaign released its first ad of the 2016 presidential cycle Tuesday, and boy is it cringeworthy.

As you probably remember, during an interview with Fox News host Sean Hannity last week, Rep. McCarthy said this before being cut off mid-sentence:

“Everybody thought Hillary Clinton was unbeatable, right? But we put together a Benghazi special committee—a select committee. What are her numbers today? Her numbers are dropping. Why? Because she’s untrustable. But no one would have known any of that had happened, had we not fought…”

Of every angle available for their inaugural presidential ad, Clinton’s campaign thought it best to remind voters Hillary’s polling numbers are in the toilet (right next to her server) because of a Congressional probe that ultimately sparked an FBI investigation. So, um, yay?

Emily Schillinger spokeswoman to Speaker Boehner said, “this is a classic Clinton attempt to distract from her record of putting classified information at risk and jeopardizing our national security, all of which the FBI is investigating.”

Exposing her use of a personal email account, home-brewed server, and questionable handling of classified information are only a few gems unearthed by the Congressional investigation into Clinton’s handling of the Benghazi terrorist attack during her tenure as Secretary of State thus far.

After mounting public pressure, Hillary begrudgingly apologized (sort of… we think… it’s hard to tell) for EmailGate. Is she now not sorry (again), because the VAST RIGHT WING CONSPIRACY MADE HER DO IT!!?!

But hey, if Clinton wants to make the case that people don’t trust her because Congress exposed her questionable handling of classified information, along with 30,000 emails about yoga, then by all means — you do you, Hillary. You do you.

Most of the media is replaying this ad over and over though. Uneducated voters think this is just an attack by the GOP. Heck, my dad rolls his eyes every time the word “Benghazi” is mentioned. Her first political ad is being touted as a great ad by all the alphabet news organizations. McCarthy is an idiot to phrase his comment as he did.

On the other side of things, someone needs to run ads against Hillary that pit her own words against her. Clips that show her lying, changing her mind, or clarifying her remarks about her emails. We need an ad showing the photos of Benghazi then a clip of Hillary saying “what difference now does it make?” We need an ad showing her lying about her Bosnia trip. We need to continuously show the American people that she is a pathological liar and cannot be trusted to lead this country.

Right now, she still wins the election if we all voted today. She’s playing the vast right wing conspiracy card, the woman card, and the “everyone is attacking me because I’m a Clinton” card. The only thing that can counter Hillary is Hillary herself.

All of those nice quotes were well before McCarthy’s unschooled and stupid-for-a-politician comments. I suppose it was not stupid for an upcoming Stupid Party Speaker of the House.

Oh please…if that were true, she’s turn herself in plead guilty, showing that she respects the rule of law,

By Any Lie Necessary.

No matter how bad you think this makes Hillary look, McCarthy still handed her a ridiculous amount of ammunition for no reason.

If the man had any concern for his party or his country, he would withdraw from the race for speaker and slink quietly away into a corner, praying no one ever notices him again.

Hillary! is running ads against McCarthy, eh? In the past, whenever a Democrat has criticized a conservative Republican the GOPe has folded faster that Superman on laundry day (shamelessly stolen from Seinfeld).

So come on, GOPe! Do the bidding of your MSM/DNC slavemasters and throw McCarthy to the wolves (you know you want to)! It’s the bipartisan thing to do!

So let me see if I can understand the logic of the Clinton campaign. They put McCarthy on their ad and blame the evil Republicans for going after Queen Hillary. So, if attacking the GOP as the bad guy can the Clinton campaign explain why Sen. Sanders is beating he in Iowa and New Hampshire? Is he a plant by placed there by the “right wing” conspirators?

” it’s unreasonable for government officials to expect us to trust their assurances when they take such pains to prevent their verification.”
By JAMES TARANTO

I guess this should be my favorite quote.

Narrated by Andrea Mitchell and Savannah Guthrie at NBC who went on air to say Hillary had no permission to cop the NBC video nor their voices for this release. What Andrea didn’t say was that she or NBC was having the video pulled out the “cable” market where it is being aired.
Right..some objection!

In hindsight, no objection to having this play in paid for campaign ads by either Andrea and Savannah may be indicative of NBC throwing Hillary a bone to appease Clinton’s campaign. After Andrea Mitchel’s Clinton interview, she needed to go on defense “for not pressing Hillary on the server and replying she was fearful of having them (handlers) shut her down” and Savannah for the opposite, defending her challenge to Hillary to get her to reply to her question “Do you get how bad it looks?” on keeping emails and server(s)a off the grid. This is what Hillary PAY BACK looks like.

Where are the indictments, the perp walk and the wall to wall courtroom coverage? A Republican that was in this position would already be under the supermax in Florence Co. This “ahem” woman is still putting wicked witch of the west mug all over the nation’s television screens everyday.

Nillary. Typo or new nickname? Either way I like it.

McCarthy needs to be beat with a rubber hose, what an idiot.

Why is Hillary, NOT in jail ? She has committed so many criminal acts, she appears to be Jail-Proof. If this was a Republican, they wold have been in jail months ago.

Hillary Clinton is just like Obama a SERIAL LIAR!
Her position on anything depends on which the wind is blowing at the time. I have never seen such a phony! Don’t you just love it when she gets “mad” and is ranting and raving!

As far as the e-mail scandal. If anyone of us had TOP SECRET Code word material on our home computer and had given the material to our uncleared attorney. Well the FBI would have stopped by and kicked in the front door seized and computer equipment and we would be in jail on a extremely high bond if any! The double standard is stunning!
How could any one with two working brain cells vote for her??