Sorry? Not sorry? Your guess is as good as ours. 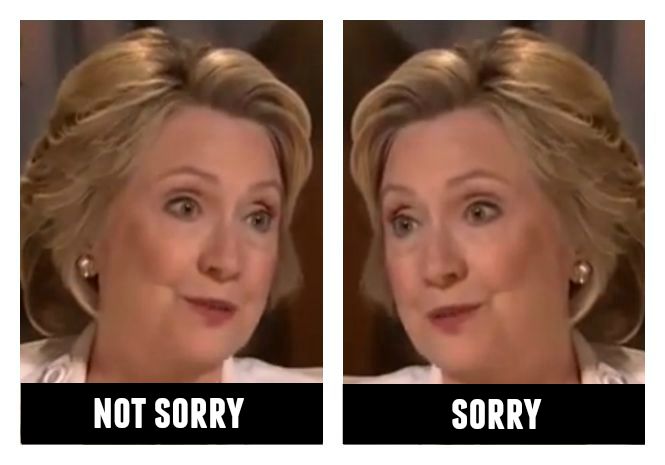 It appears Mrs. Clinton has changed her tune since Monday. Or maybe she hasn’t. It’s virtually impossible to keep track.

According to ABC News World Tonight reporter David Muir, Hillary Clinton has changed her mind and is now sorry for using a home brewed email server during her tenure as Secretary of State.

Just yesterday, Clinton said she had no need to apologize saying, “what I did was allowed.”

In an interview with MSNBC’s Andrea Mitchell last Friday, Hillary twice refused to apologize for the very server she’s now sorry for, apparently.

As I wrote Friday:

“You said recently that using your personal email as Secretary of State was not the best choice and that you take responsibility,” Mitchell began. “Are you sorry?”

…Again Mitchell asks Clinton if she’s sorry and if she would like to apologize to the American people for the choice you made.

“Well it wasn’t the best choice. I certainly have said that, I will continue to say that as I’ve also said many times, it was allowed, it was fully above board, the people in the government knew that I was using a personal account but it would’ve been better if I had had two separate accounts to begin with,” said Clinton.

Sorry? Not sorry? Your guess is as good as mine.

What is she sorry for? Why, in true Clinton style, getting caught of course.

Go directly to jail. Do not pass go, do not collect nomination.

She’s so like a fly on fly-paper, you almost feel sorry, watching her wrench her own legs off.

Not even close to feeling sorry for her!

Of course she isn’t sorry, she’s trying to save face since she keeps getting caught in never-ending lies.

In addition, any idea how she is going to “take responsibility” for her actions?

The only reason she is saying this now is so she can repeat herself in eight months by saying, “I already told the American public I was sorry for everything.”

She can take responsibility by turning herself in at the nearest federal penitentiary.

Perhaps a snake-eyed ragin’ cajun got Hillary to spit out the mea-sured culpa.

And I thought…Hillary means never having to say you’re sorry.

She has learned well from Bill.

On second thought, can we be sure it wasn’t Hillary schooling Bill;
over all the years she was behind him, whispering in his ear?

What an empty statement, saying she “takes responsibility” for her actions. I think Hillary sees herself as that guy who steps forward at the prison camp, knowing he will be shot for doing so.

No, we have to make her “take responsibility” by first making certain her political career is finished, then by doing whatever it takes to put her behind bars.

Does being “sorry” mean that you are innocent?

Brian Pagliano’s been offered immunity by senate investigators. Sen. Grassley and Sen. Ron Johnson made the offer and a “proffer session” has been proposed, off the record, after which a decision would be made on how to proceed.

Interesting and raises a whole bunch of possibilities as to outcomes and scenarios. Fascinating.

Others have “accepted responsibility.” https://youtu.be/bn_8HxHYCwY?t=1m18s

So Shrieking/Cackling Hillary has morphed into Golf Announcer Hillary.

Too late for this sow’s ear to become a silk purse.

“it was fully above board, the people in the government knew that I was using a personal account”

How exactly does the existence of witnesses exonerate one’s crimes?

I don’t recall asking for her apology.

I want an accounting. Who, what, when, where, how, why. I want allocution: I want Hillary (preferably under oath) to say what she did, with whom, and so on. I want her confidantes exposed: Huma Abedin, Cheryl Mills, Sid Blumenthal, Patrick Kennedy. Each of them under oath.

Save the “apology”. Put the facts forward.

Love means never having to say you’re sorry. So does American politics.

Seems to me the time for an apology would be during the sentencing phase, after the traitorous witch is found guilty of various Federal crimes AND compromising national security.

Hillary will say whatever she thinks will limit the criticism from reverberating.

One of the things Clinton principles hold is to utter the word aapology or admit doing something wrong. So she won’t.

She can play a little with the word sorry. sorry she made herself look bad – that kind of thing.

One of the Clinton principles of politics is NEVER to utter the word “apology” or admit doing something wrong * and to get their opponents to do so.

They are especially fond of the word “apology” or “apologize”

Let an opposing candidate say that word and nothing else they say about the matter matters. They will tell all reporters “My opponent apologized!”

———-
* Bill Clinton has never admitted doing anything wrong in the Monica Lewinsky case. He has said no words that can be used against him.