A new Gallup poll released yesterday revealed that 58% of Americans support legal marijuana use. Sentiment peaked at 58% in 2013 as well, before dipping sharply in 2014 and then recovering.

This represents a high point in Gallup’s 46-year history of polling on legal marijuana use. Back in 1969, only 12% of Americans backed legalization; 1977’s polling revealed a 28% peak in support which dipped until 1993. Since then, we’ve seen a steady increase in support. 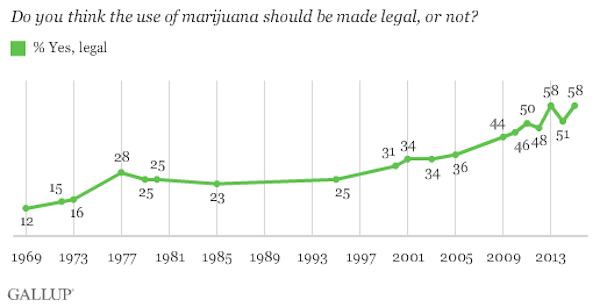 Stereotypes fall into place as far as demographics are concerned. Younger people, Democrats, and independent voters are more likely to support legalization, whereas older voters and Republicans are less likely to support it.

Interesting point: support has (predictably) increased amongst 18-34 year olds from 20% in 1969 to over 70% today, but it has also increased—at a similar rate—amongst older Americans and senior citizens.

Gallup’s takeaway on this point? Among all age groups, the increase in support has been proportionately greater over the last 15 years than it was between any of the earlier time periods.

These patterns by age indicate that one reason Americans are more likely to support legal marijuana today than they were in the past is because newer generations of adults, who are much more inclined to favor use of the drug, are replacing older generations in the population who were much less inclined to want it to be legalized.

But the increase in support nationwide is also a function of attitude change within generations of Americans over the course of their adult lifespans. Gallup’s historical data allow for a look at how views on marijuana legalization have changed over time among independent samples of those in the same birth cohorts. For example, Americans who are aged 65 through 79 today — born between 1936 and 1950 — are more supportive of making marijuana legal in 2015 than those born in the same years were 15, 30 and 46 years ago. This birth cohort’s support has increased from 20% in 1969 to 29% in 2000/2001, and is 40% today.

Supporters and attitudes have changed—and yet we’re not seeing nearly as persuasive an argument behind marijuana legalization as we saw with gay marriage, which saw similar change in sentiment amongst similar demographic groups. We now have multiple states making use of their own legislatures to legalize and regulate marijuana use within their own borders, and a federal government that has essentially abandoned federal law governing its use and sale.

Health care, education, and the economy have dominated in the minds of voters so far this cycle—will legalization (and to a greater extent, state sovereignty) take its place in the mix? Stay tuned.

“…an all time high” is an appropriate title for this article.

1 – legalize it if you want (the states that is)
2 – legalize them all if you want
3 – don’t call addiction a disease as if it is caught by casual contact and not by deliberate action.
4 – change state laws to make the individual who choses to use pot or any other drug or alcoholic beverage liable and responsible for their own actions.
5 – stop requiring health plans to subsidize addiction recovery.

For too long, people have not been held responsible for their own actions. Make it so!

6. No welfare or Social Security Disability payments for azny person whose abuse of drugs or alcohol prevents them from holding jobs.

The problem there is that long term pot makes it hard for a lot of potheads to live in society. They seem to have little problem getting medical pot cards or prescriptions due to their array of owies. My theory is that over the years, they become hypersensitive to many things in the environment, as well as the normal wear and tear of life, due to their brains compensating for the sedative effects of pot by becoming more sensitive (or something like that). I know one guy who hasn’t been able to hold down a job for more than a year or so over the last couple of decades thanks to the environmental issues he inevitably encounters – most often smells, but also sounds, I and other radiation that we aren’t supposed to pick up. That one is extreme, but not atypical in comparison with the other long term habitual potheads I know. Which is a long way of saying that I don’t see how you distinguish between potheads who don’t want to work and those who really can’t.

As a daily evening user, I tend to agree. I’m retired now, but I spent my life working in high pressure, results-oriented environments. I don’t think my vice (I don’t drink) affected my work, but I have no way of knowing.

Since no one forced them to babitually smoke something known to cause precisely that problem I don’t see why my tax dollars should have to pay for it. Let them ask for private charity.

None of them think of any of the consequences. It’s the same nonsense from most MJ users. They will never be held responsible for their actions.

You cannot field test for levels of impairment or blood THC levels. If you want to get high in your home you can and no one cares. It’s the people that are too lazy to keep their habits at home that want to use anywhere.

Sure, why not. While consumption of psychotropic drugs may be used to escape reality, they do not generally cause collateral damage. It’s a choice.

Then there are other choices like pro-choice/abortion that are a gateway orientation and behavior to clinical cannibalism and debasing human life.

What is missing from why some of us support legalizing pot is that that fits into our libertarian mindset. I proudly voted for legalization in CO, without any intent of ever availing myself of the product. If someone wants to go through life stoned, it is fine with me. It is their problem, not mine.

Make your own decisions, people. Live your own lives. And own the consequences of whatever choices you’ve decided to make.

Amy, are you a capital L Libertarian?

This is while tobacco is all but banned.
Where I see a parallel to same sex matrimony is the lack of knowledge we as a society have about the issue. The day after SCOTUS legalized same sex marriage AAP came out against it. So lets legalize it and discuss later.
Similarly, while we can make conclusions about the long-term damage from observing chronic users, we know precious little about marijuana in medical terms. How do 420 ingredients affect us? A psychiatrist friend of mine, a liberal in good standing, is vehemently against legal pot because she had so many clients who had their first panic attack while high and now continue to suffer from them.

The day after SCOTUS legalized same sex marriage AAP came out against it.

If by AAP you are referring to the American Academy of Pediatrics, I don’t think you’re correct. They’ve been supportive of same gender civil marriage for a number of years, and were happy with the Obergefell decision. If it’s some other “AAP” (I’m sure it’s a common enough acronym), forgive me.

The President came out against it, in any event.

6/26/2015: The American Academy of Pediatrics Applauds Supreme Court Decision to Recognize Same-Gender Marriage in All 50 States

This has long been their position, though it’s worth keeping in mind that a lot of so-called “physicians’ groups” (including the AAP and even the AMA) have been pretty successfully captured by the Left, and do not necessarily reflect the thoughts or opinions of all, or even the majority of, physicians.

Also, my apologies – I accidentally hit the “down thumb” when I was going for “reply”.