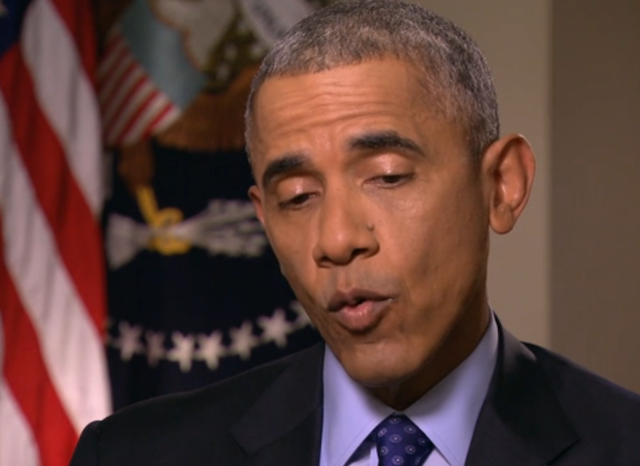 Last Sunday, we published a post showing how Obama pretty much signaled Justice to lay off their investigation into Hillary Clinton’s email server. During an interview with 60 Minutes correspondent Steve Kroft, the President threw the FBI’s investigation under the bus when he said—without going into much detail—that he didn’t think the server posed a national security threat.

Steve Kroft: Do you think it posed a national security problem?

President Barack Obama: I don’t think it posed a national security problem. I think that it was a mistake that she has acknowledged and– you know, as a general proposition, when we’re in these offices, we have to be more sensitive and stay as far away from the line as possible when it comes to how we handle information, how we handle our own personal data. And, you know, she made a mistake. She has acknowledged it. I do think that the way it’s been ginned-up is in part because of– in part– because of politics. And I think she’d be the first to acknowledge that maybe she could have handled the original decision better and the disclosures more quickly. But–

Steve Kroft: This administration has prosecuted people for having classified material on their private computers.

President Barack Obama: Well, I– there’s no doubt that there had been breaches, and these are all a matter of degree. We don’t get an impression that here there was purposely efforts– on– in– to hide something or to squirrel away information.

Pretty unbelievable, considering the investigation was still ongoing, and that investigators had given no indication that they were planning to cut things off or offer an immediate update on the investigation’s status.

On Tuesday, the White House figured out how serious a misstep this may have been. They walked back the President’s comments about the investigation—and hid the statement right in the middle of the scrum surrounding the Democratic debate:

“The President was making an observation about what we know so far, which is that Secretary Clinton herself has turned over a bunch of email to the State Department, and the review of that email has garnered some differing assessments about what’s included in there,” Earnest said.

The President’s comment was “certainly was not an attempt, in any way, to undermine the importance or independence of the ongoing FBI investigation,” Earnest said, stressing that Obama “has a healthy respect for the kinds of independent investigations that are conducted by inspectors general and, where necessary, by the FBI.”

This walk-back wasn’t nearly enough—and now, the FBI is hitting back against the impropriety of the President’s remarks.

A spokesman for the F.B.I. declined to comment. But Ron Hosko, a former senior F.B.I. official who retired in 2014 and is now the president of the Law Enforcement Legal Defense Fund, said it was inappropriate for the president to “suggest what side of the investigation he is on” when the F.B.I. is still investigating.

“Injecting politics into what is supposed to be a fact-finding inquiry leaves a foul taste in the F.B.I.’s mouth and makes them fear that no matter what they find, the Justice Department will take the president’s signal and not bring a case,” said Mr. Hosko, who maintains close contact with current agents.

Several current and former law enforcement officials, including those close to the investigation, expressed similar sentiments in separate interviews over several days. Most, however, did so only on condition of anonymity because they were not authorized to speak publicly about the case.

The FBI has reason to be angry, because this isn’t the first time that President Obama has overstepped with regards to one of their investigations. In 2012, Obama offered come critical commentary about the agency’s ongoing investigation of former CIA director David Petraeus.

“I have no evidence at this point, from what I’ve seen, that classified information was disclosed that in any way would have had a negative impact on our national security,” the president said at a 2012 news conference, as the F.B.I. was trying to answer that very question about Mr. Petraeus.
…
The F.B.I. ultimately concluded that Mr. Petraeus should face felony charges and a possible prison sentence. Not only had he provided highly classified information to his biographer — including notes about war strategy and the identity of covert officials — but he also lied to agents about it. James B. Comey, the F.B.I director, made the case to the attorney general, Eric H. Holder Jr., that Mr. Petraeus deserved to face strenuous charges.

But the Justice Department overruled the F.B.I., and earlier this year the department allowed Mr. Petraeus to plead guilty to a misdemeanor. He was spared jail time and remained an informal White House adviser.

Although current and former senior officials at the Justice Department who were involved in the case said the decision was not influenced by the White House, F.B.I. agents came to view Mr. Obama’s remarks about Mr. Petraeus as a harbinger of the ultimate outcome.

Like it or not, the President’s words matter—especially when it comes to defending members of his own Administration. What was once a politically tricky investigation has now been set up as a politically doomed one. Will this prompt a harsher investigation (and eventual criminal prosecution, if we get that far) from the FBI, as a way to save face and defend the integrity of the agency?

It might be necessary—and if that does happen, Clinton has only Obama and herself to blame.

President Barack Obama: “Well, I– there’s no doubt that there had been breaches, and these are all a matter of degree. We don’t get an impression that here there was purposely efforts– on– in– to hide something or to squirrel away information.”

Yeah. She’s FLUCKING admitted she was doing EXACTLY that, and WHY.

And you don’t violate the laws regarding classified materials and breaches of security “by degree”. You do or you DON’T, and SHE DID…!!!

AND we ALLLLLLL know it. Now, get her ass indicted, tried and jailed.

The Emperor is not bound by rules.

We need a beer summit with the FBI Director to talk this over.

HILLARY CLINTON: “Well, I’ve taken responsibility for it. I did say it was a mistake.”

What kind of lame crap is that? She’s taken “responsibility” so there are no consequences for her?
We need a perp walk complete with chains top and bottom, a gaudy trial and big conviction.
She needs a new black and white striped pantsuit.

The Benghazi debacle is what spurred this investigation, but I have a feeling there are much more damning revelations on that server.
Like the hundreds of millions that CGI took in from foreign entities that had business before Hillary’s DoS, for example. That’s not just a violation of law, it’s an activity explicitly forbidden in The Constitution. The fact that this vile, lying hag is even still a candidate for the Democratic nomination is a black eye to that entire party.

The fact that the party still support Tyrant Obama the Liar is a disgrace.

Let’s hope that the outcome is the same as in the Martin/Zimmerman case into which obama stuck his big nose. Zimmerman was found not guilty even though obama and all of his liberal minions wanted a conviction.

In my book, it is simply “unbelievable” . That, and the fact that these days, the world is using “pretty” in the wrong way too much.

The Obama faction cannot secure a victory without the Clinton faction.

But but but Bernie said it was ok ,Say it ain’t so Joe .Hillary will be protected unless caught with a dead boy or a live girl in bed.

Let me introduce you to this ‘live girl’ named Huma. She’s been in Hill’s bed for at least ten years. Everyone knows it.

Anderson Cooper .Mrs Clinton there is concern about your email security. Clinton ” Yes Anderson I emailed someone in Greece and you know Greece is lovely this time of year”. Anderson” Oh yes Athens and the Pathenon in a fall sunset can not be beat.”

C’mon. Any real pressure Obama wants to put on the FBI would be done internally, a ‘little visit’ from a Justice Dept/White House advisor type explaining what is desired and the consequences if it isn’t provided. What Obama told Kroft publicly was purely for liberal media consumption, a signal on how Obama wants the story reported during an election cycle with a possible ‘defendant’ who is leading the pack for the Democrat nomination at present. Public comments and leaks are how the lesser minions fight back against the ‘little visit’ threats.

Or as I put it, he Pontius Pilated the hell out of this. Now whatever happens isn’t on his head.