…but not without opposition 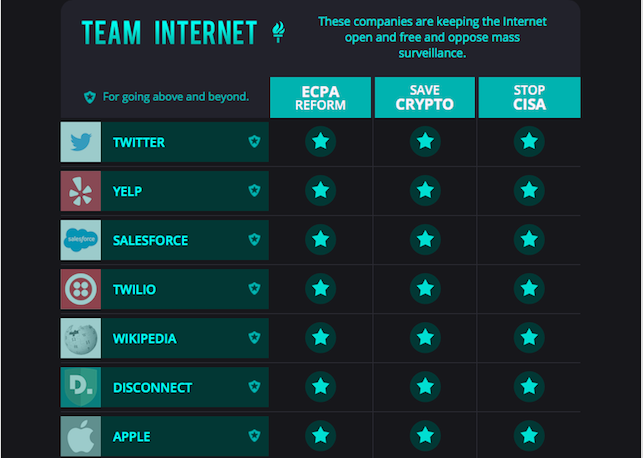 Today, a controversial cybersecurity bill aimed at making it easier for corporations to prevent hacking attacks advanced in the Senate with bipartisan support.

The Cybersecurity Information Sharing Act (CISA) in its current form would make it possible for corporations to share information about cyberattacks with each other—or the goverment—without having to worry about fielding privacy-based lawsuits.

The bill enjoys bipartisan support in the Senate—and has languished under bipartisan opposition, led by Kentucky Senator and Presidential hopeful Rand Paul.

But many privacy activists and a few lawmakers, including Republican Senator Rand Paul and Democratic Senator Ron Wyden, vehemently oppose it. Several big tech companies also have come out against the measure, arguing that it fails to protect users’ privacy and does too little to prevent cyber attacks.

“The bill would grant legal immunity to companies who in sharing information actually violate your privacy,” Paul said in the Senate shortly after the procedural vote of 83 to 14, well above the 60 “yes” votes needed to move ahead.

The Senate began debating amendments to the measure, which is on track to pass next week.

The House of Representatives passed its version of CISA in April with strong support from Republicans and Democrats.

Any version of CISA passed by the Senate would have to be reconciled with the House bill before it could be sent to the White House for President Barack Obama to sign into law.

A source close to the White House said the administration would applaud CISA’s passage and push for revisions as it was being reconciled with the House bill.

Many advocacy organizations, like Freedomworks, are concerned that CISA’s data sharing protections could lead to Americans’ personal information ending up in the hands of foreign hackers—by way of vulnerable federal agencies:

Decide the Future has put together a pretty comprehensive case against CISA—and they’re also holding both Congress and tech giants accountable for their position on the bill.

Of course, many high-profile tech companies oppose the bill:

Security+privacy are both priorities for us and therefore we can't support #CISA as written. We hope to see positive changes going forward.

Congress is trying to pass a "cyber security" bill that threatens your privacy. Join us & others to oppose: http://t.co/WtpEoS4ESS

Amy, this is one of those stories (and there have been several) where a lot more detail would have been both a service to your readers and…I dunno…MANDATED!

This kind of high school “but there are two sides to the issue” stuff is WAAAAAAY short of what you are capable of presenting.

I’m not sure why we have cybersecurity. It’s not stopping foreign gov’s from getting to everything we have. Before long private citizens may have to just take over the IT infrastructure in this country and cut the gov out of the loop. They are irresponsible with our data.

Instead of trying to be ‘connected’ why don’t we start disconnecting all of our databases and come up with a courier system to physically transfer hard drives etc? Even if intercepted, it would only be, say, a bunch of offices’ records for like one month or whatever, instead of our entire credit report, our entire service record if military or gov employee, and so forth.

Have you ever noticed how, when the government tries to “fix” something, they eventually make it worse?