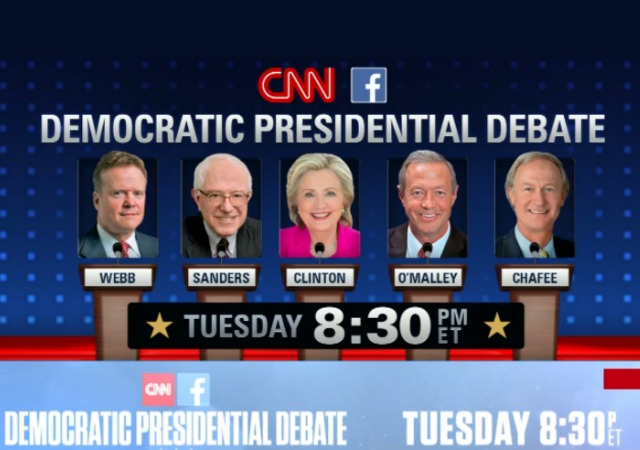 Howdy and thanks so much for joining us tonight!

You can watch the first Democratic presidential debate live on CNN and CNNgo.

This will be the first of six DNC sanctioned debates.

The meager number of Democratic debates is a contentious issue for Democratic delegates and candidates who believe the debate schedule has been rigged to favor Hillary.

Five Democratic presidential candidates are about to try their luck at the first Democratic debate of the 2016 election in Las Vegas on Tuesday night.

But the spotlight is largely on two: former Secretary of State Hillary Clinton and Vermont Sen. Bernie Sanders.

The former secretary of state needs to remind viewers of the debate sponsored by CNN and Facebook about why she began the year as the overwhelming front-runner and is best able to take the torch from President Barack Obama.

Sanders has the opportunity to prove to millions of voters why a 74-year-old self-described democratic socialist can take on both Clinton and Republicans.

There’s also a lot at stake for the three lesser known underdogs, particularly former Maryland Gov. Martin O’Malley, whose stalled campaigns could benefit from an “all in” performance Tuesday.

sorry, but i just ate…

no sense wasting good food by watching/listening to such nauseating drivel.

Why kill the good mood acquired by the the Cubs win by watching a bunch of over privileged, over hyped senior citizens trying to act cool?

Such diversity on that stage. This is clearly the “big tent” party.

Let’s go politically incorrect here.
Mormon Drinking Game: Every time one of the Democratic candidates takes on a real issue without blaming the Republicans, promising more taxpayer spending to ‘fix’ it, or resorting to a personal attack, take a drink. (/snark)

I’m just waiting for those amazing commercials at half-time.

When are they bringing the candidates of color out? These are all pink. Except Sanders of course who is Red.

Just not Elizabeth Warren red… or maybe just like that.

Since they are so concerned about gun violence are they going to disarm democrats as it seems to me most gun violence is done by democrats in places like Chicago …. Newark ….. Camden…. Baltimore …certainly not the NRA and Republicans

Bernie is an idiot.

Now that Bernie’s officially up on stage with the Donks, it might be a really good time to change that red state/blue state stuff. The states which vote for the Rats are the Red states. Of course we all know this, but now that it’s official—on TV, and everything—I think they can finally admit it.

The candidates, the media, all “gag me with a maggot” moments.

Didn’t catch it – was busy doing something productive thing.

Did Hillary Clinton get arrested?

It’s a little bit weird that Carly lives in your head to such an extent that you’re awake and ranting about her on the Internet, on a blog post that has nothing to do with her, at 4:10am.

The subject is the 2016 elections, and of course,

“Eternal vigilance is the price of liberty.”

… the American people are sick and tired of hearing about your damned emails!

I didn’t watch or listen to that nonsense last night.

Was it…as several had predicted…”all about T-rump”, or was that just another of their fever dreams?

So who won. Not who does the media think won, but who actually is going to go up in the polls after this?

From what little I saw it’s hard to tell. Plus this hangover from celebrating…