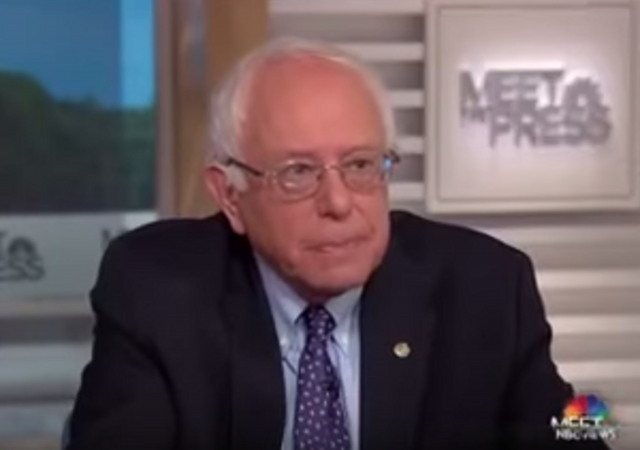 On the eve of their first presidential primary debate, the Democratic primary drama rages on.

According to Rep. Tulsi Gabbard (D., Hawaii) vice chair of the DNC, she was disinvited from Tuesday’s Democratic primary debate after publicly calling for more primary debates.

The number of primary debates has been a contentious issue for Democrats this election cycle.

“If she needs a ticket, have her give me a call,” Sanders’ campaign manager, Jeff Weaver, told CNN Monday. “I think we have a couple; we can give her one.”

Both Sanders and his fellow Democratic presidential candidate Martin O’Malley have called for more primary debates. The DNC has capped the number at six. O’Malley has accused Rep. Debbie Wasserman Schultz (Fla.), the party’s chairwoman, of limiting the debates in an “undemocratic” attempt to “pre-ordain the outcome” of the nomination race, namely, a Hillary Clinton win.

Gabbard and a fellow DNC official have echoed calls for more debates, a move that the Hawaii congresswoman claims prompted the DNC to disinvite her from the debate Tuesday night despite her specific request for tickets.

“When I first came to Washington, one of the things that I was disappointed about was there’s a lot of immaturity and petty gamesmanship that goes on, and it kind of reminds me of how high school teenagers act,” Gabbard said Sunday night.

“It’s very dangerous when we have people in positions of leadership who use their power to try to quiet those who disagree with them. When I signed up to be vice chair of the DNC, no one told me I would be relinquishing my freedom of speech and checking it at the door.”

She said that she would instead watch the debate in Hawaii.

A source close to the DNC said that an aide to Wasserman Schultz suggested to Gabbard that she should reconsider attending the debate if she kept focus on a “distraction” that could hurt the party rather than on the candidates.

Chalfant also reports the DNC rejects Gabbard’s claims that she was uninvited.

According to Real Clear Politics, though Bernie Sanders trails Hillary Clinton, Sanders continues to gain traction in the polls while Clinton’s continue on a steady downward path.

The first Democratic presidential primary debate will be hosted by CNN Tuesday night.

Both sides are working very hard at bending rules and twisting arms so as to have a certain outcome and only that outcome for the election of our next President.

That should ring alarm bells all over and notify everyone that the elite establishment has decided that we no longer have the right to choose our President by our votes and that we will vote for who they want. The only “choice” will be who’s party is the so called winner.

There should be a general rebellion over this alone, let along a lot of other things happening both here and abroad.

And the individual states aren’t off the hook either because they’re playing games with primary rules and voting laws that will also tend to manipulate the eventual outcome.

Both sides are working very hard at bending rules and twisting arms so as to have a certain outcome and only that outcome for the election of our next President.

All those oh-so-democratic primary elections and debates still haven’t displace the smoke-filled back room.

The debate tonight will show the Democrats lack of talent compared to the Republicans. Sanders is a Democrat Socialist and the emphasis should be on socialist. Do the Democrats really think they can win by moving further to the left? Those of us who live in the western southern tier of NY saw what happened in the 23rd congressional district when the Democrats nominated a candidate who was too far left for the constituency. Presidential elections are won in the center. The debate should be interesting if only to see if the Democrat candidates race to the left and out of tune with independents and the center who don’t want an extension of Obama.

It will be poetic justice if, later in the cycle, Hillary and her supporters have to call for more debates due to being behind in the polls.

Absolutely, almost a given. The spread in standings will be so close after round six that DWS will have to pull at least two more debates to “grease” Hillary into the General.

Like Santa Claus and the Tooth Fairy, Socialism is a fantasy for little children.

Actually the dreams of the tooth fairy have already been fulfilled years ago. We have social security, medicare, medicaid, disaster assistance, public roads, mutual fire/police protection that are all socialist programs.

America has been a socialist country for years, so all you can do is quibble about the degree of socialism we should have.

I’m not sure the younger generation has a problem with socialism only because the schools have kept them ignorant of the subject. Besides, it sounds so just and fair while it’s really a con for the gullible and naive. Plus it caters to greed and envy by demonizing a class of people. Elect me and I’ll give you other people’s stuff…

Public schools are a socialist program. It never ceases to amaze me how conservatives don’t get it.

What do they have to debate ? Which failed Policies to continue to shove down our throats ? Hillary should drop out in shame, because of the career of Lawless behaviour and questionable practices.