Tension in the South China Sea

Tension in the South China Sea 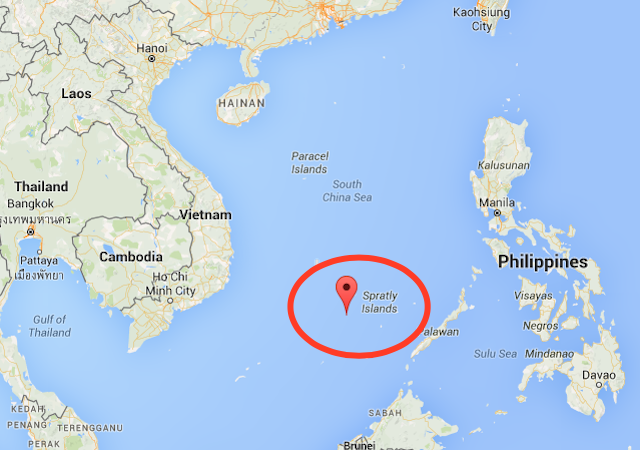 China, Brunei, Malaysia, the Philippines, Taiwan and Vietnam have spent years debating whose sovereignty holds supreme over territory in the South China Sea. Back in 2014, China began the work of turning the Subi and Mischief reefs in the Spratly archipelago into permanent land forms; before China began this massive dredging project, these “islands” would disappear during high tide. Now, however, China has laid exclusive claim to the new islands, as well as a 12 nautical mile buffer zone around them.

China has jealously guarded this territory, but the United States Navy is about to defy that claim.

Tonight, the Navy will send the USS Lassen through those waters and into the 12 mile buffer zone surrounding the Spratly archipelago in the first of a series of missions into the area.

Additional patrols would follow in coming weeks and could also be conducted around features that Vietnam and the Philippines have built up in the Spratlys, the official said.

“This is something that will be a regular occurrence, not a one-off event,” said the official. “It’s not something that’s unique to China.”

White House spokesman Josh Earnest referred questions on any specific operations to the Pentagon but said the United States had made clear to China the importance of free flow of commerce in the South China Sea.

“There are billions of dollars of commerce that float through that region of the world,” Earnest told a news briefing. “Ensuring that free flow of commerce … is critical to the global economy,” he said.

The west has emphasized the importance of free navigation, but China has remained defiant with regards to its claim over territory in the South China Sea:

During his recent visit to Washington, President Xi Jinping asserted Chinese claims over the area, saying “islands in the South China Sea since ancient times are China’s territory”. He said the construction did “not target or impact any country and China does not intend to pursue militarisation”.

But at a joint press conference with the Chinese leader, President Barack Obama expressed concern about the “land reclamation, construction and the militarisation of disputed areas” and stressed that the US and other nations had the right to pursue freedom of navigation exercises in the area.

What’s happening in the South China Sea isn’t exactly unprecedented. Earlier this month, Chinese vessels entered US waters off the coast of Alaska while President Obama was visiting the state. The Chinese claimed this was “innocent passage,” but their actions spurred further tension.

The United States does not recognize the manmade islands as Chinese territory, however, so the Navy’s mission there will send a far different message.

The article was reading nicely, but I stopped reading when I reached the reference to Josh Earnest. I’m weary of the obama administration and its lies.

Nothing will happen. Obama doesn’t have the balls or the work ethic to fight a war.

The next president will inherit it.

If Obama wants to send a Sternly Worded Letter, there must be cheaper ways of doing it.

Also, when will Obama learn that drawing red lines and making idle threats tends to boomerang on him?

The only reason the Navy is being sent to tweak China is that there are no conservative or Republican targets (the Admin’s real and only enemy) to attack on the high seas.

I have to admit that’s pretty clever. Build an island and claim territorial waters. I wonder what maritime or other international laws would apply.

The only proper response to China’s action is a parade. Every single country with a blue-water navy ship should send it crusing past the island with flag flying.