As Hillary Self-Destructs, Biden Shrewd to Sit Back and Watch

As Hillary Self-Destructs, Biden Shrewd to Sit Back and Watch

When your enemy is in the process of destroying herself, stay out of the way. 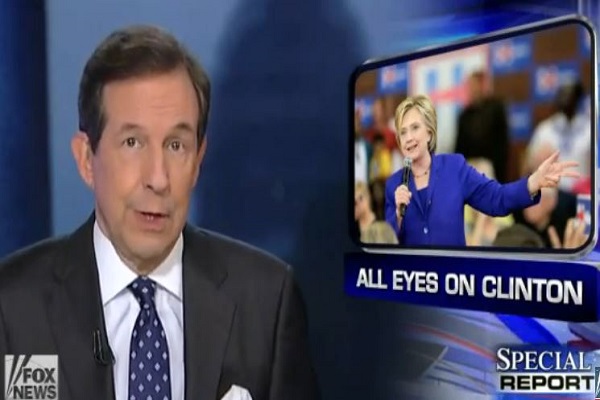 Hillary Clinton struggles to get her campaign on track, lurching to the left on a variety of issues near and dear to the hearts of the progressive base and facing the fallout from her decisions as Secretary of State as her poll numbers tank.

Here’s a chart via Hot Air that shows the trend of her and other Democrat candidates’ polling (Real Clear Politics has an interactive version, if you’re interested): 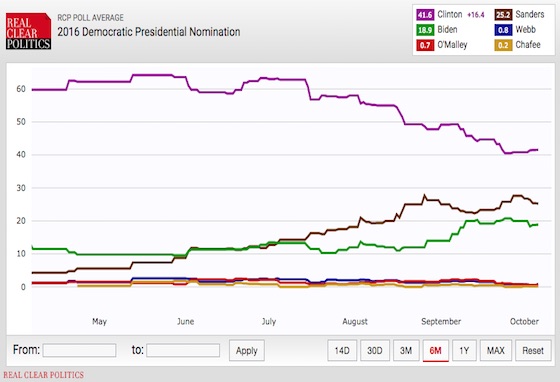 According to Fox News’ Special Report, the coming few weeks will be key to determining the success of these attempts.  Watch:

The report indicates that in order to reboot her campaign, she needs to navigate the upcoming perilous waters very carefully. Huma Abedin will be testifying before Congress on Benghazi on Friday, October 16th, Clinton herself will testify the following week, and then at the end of the month, another batch of emails are scheduled for release.

In addition to all of that, the first Democrat debate will be held on Tuesday, and this will be key for Hillary.  With the news that CNN has shaved an hour off the debate, she may think that she’ll have an easier time of it; however, as we’ve noted, Lincoln Chafee will undoubtedly be a thorn in her side.

Additionally, Bernie Sanders has indicated that he’ll be quite scrappy with Hillary about her “inconsistency” on key issues, and Martin O’Malley’s “Wow! That’s a reversal” response to Hillary’s recent change of heart regarding TPP does not bode well for her with a debate looming in only a few days.

When you’ve lost MSNBC . . . . Watch as Chris Matthews lays out all of Hillary’s “new” positions and as he and the panel annihilate her for being not only inconsistent but also insincere:

As evidence mounts that Joe Biden is seriously considering entering the presidential race, he’s wise to sit back and watch the events of the next couple weeks unfold.

Back in March, The Atlantic was already speculating that Biden was running a stealth campaign for president.  Not only had he already visited Iowa, New Hampshire, and South Carolina by then, but he was also indicating that a third Obama term—under his leadership, presumably—would be just what is needed for Democrats to win in 2016.

To hear the vice president tell it, however, that’s exactly what he’ll be considering over the next several months. Unlike Clinton, Biden has never been coy about his interest in seeking the presidency for the third time since 1988. Asked by ABC’s George Stephanopoulos in January whether he might challenge the former secretary of state, Biden replied, “Yes, there’s a chance.”

He said he views the 2016 field as “wide open” on both sides and emphasized that he doesn’t need to make a decision on the race until late in the summer. Speaking in Iowa last month, Biden also notably embraced the idea—leveled as criticism by Republicans—that the Democratic nominee in 2016 would be running for Obama’s third term. “I call it sticking with what works,” the vice president declared.

. . . . “I can tell you without any fear of contradiction, her decision will have no impact on his,” Dick Harpootlian, the former state Democratic chairman in South Carolina, told me last week. A colorful personal-injury lawyer in Columbia, Harpootlian has emerged as Clinton’s chief antagonist within the party in recent weeks. When he’s not telling anyone who will listen that the scandal over Hillary’s secret email system will torpedo her candidacy, Harpootlian has been talking up Biden as the party’s best alternative.

Although Biden can, according to CNN rules, show up on the day of the debate and still take part in it, it seems an unlikely proposition given how long he seems to have been seriously, if quietly, positioning himself for a run.

As Hillary’s declared rivals jostle for position ahead of the first Democrat debate, Biden is smart to sit it out (if that is indeed his decision).  While it seems evident that he will be declaring his candidacy at some near point, he’s shrewd to let the other candidates take shots at her while she totters along in self-destruct mode.  At least for a little while longer.

Too early to tell, but this thing stinks to high heaven…

The lawsuit does – and possily his activities while working for the committee, which were the opposite of what he now says.

The New York Times website (using an AP story) doesn’t give you the full story:

Sorry – the good story actually was in the New York Times – today on page 23.

A former investigator for the Republicans on the House Select Committee on Benghazi plans to file a complaint in federal court next month alleging that he was fired unlawfully in part because his superiors opposed his efforts to conduct a comprehensive investigation into the 2012 attack on the American diplomatic mission in the Libyan city. Instead, they focused primarily on the role of the State Department and former Secretary of State Hillary Rodham Clinton, he said….

….In a statement, the committee cited Major Podliska’s “repeated efforts, of his own volition, to develop and direct committee resources to a PowerPoint ‘hit piece’ on members of the Obama administration, including Secretary Clinton, that bore no relationship whatsoever to the committee’s current investigative tone, focus or investigative plan.”

“Thus, directly contrary to his brand-new assertion, the employee actually was terminated, in part, because he himself manifested improper partiality and animus in his investigative work,” the statement said. “The committee vigorously denies all of his allegations. Moreover, once legally permitted to do, the committee stands ready to prove his termination was legal, justified and warranted — on multiple levels.”

In countering the complaints, the statement said Major Podliska had “never previously raised any allegation with respect to his work involving Secretary Clinton (other than that he was not allowed to do it) throughout.”

There are a number of possible ways to read between the lines.

Slow Joe would be a bad president, but he’s a lifelong politician and has the instincts of one…

It’s amazing these days, is anything not stupid is ‘shrewd.’ I guess that’s how low our standards have gotten.

Call it the Boehner phenomenon.