Bergdahl charged with desertion, “misbehavior before the enemy”

Bergdahl charged with desertion, “misbehavior before the enemy”

Could face life in prison…if convicted 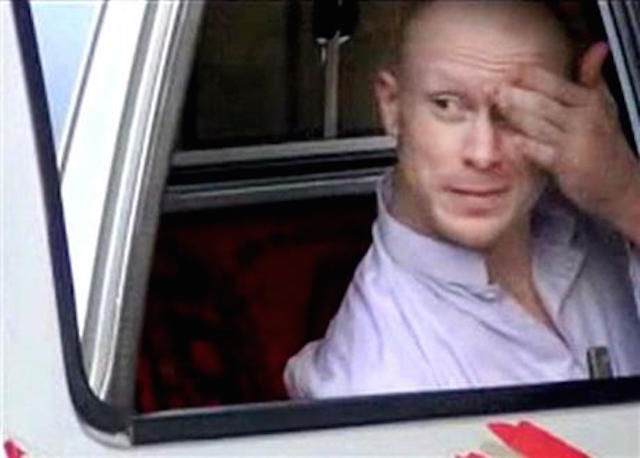 Last year, the United States released 5 high-profile al Qaeda commandos from the Guantanamo Bay detention facilities in exchange for the release Sgt. Bowe Bergdahl. Bergdahl was captured by militants after he allegedly deserted his base in Paktika province in eastern Afghanistan. The exchange embroiled the Obama Administration in scandal—why did we trade dangerous prisoners for the freedom of a deserter?—and the public quickly began to demand answers about what consequences should and would rain down on Bergdahl’s head.

Today, finally, the Army announced that Bergdahl has been charged with one count each of desertion and “misbehavior before the enemy.” If convicted, he could face life in prison.

The Army concluded its investigation into the circumstances of Bergdahl’s capture in December. Until now, it has been in the hands of Gen. Mark Milley, head of U.S. Army Forces Command, who made the decision to charge Bergdahl. Several U.S. military officials CNN has spoken with suggested privately that the process took longer than expected.

Ahead of Wednesday’s announcement, officials said Milley only had a few choices. Though the sense had been that Bergdahl must be held accountable for his actions, there had been little appetite for a lengthy term in military confinement given the five years Bergdahl was held by the Taliban.

Bergdahl, who’s now 28, was taken by the Haqqani terrorist network. But the circumstances of Bergdahl’s departure from his base and how willingly he left have not been clear.

King said he couldn’t offer those details on Wednesday, and that they’re being treated as evidence for the upcoming proceedings against Bergdahl.

Of course, it wouldn’t be politics if we didn’t leave the charges to the lawyers and dive into the electoral consequences of one of the Administration’s most controversial decisions.

Monica Crowley explained how this could play out today on Fox News:

Monica makes a good point—on one hand, this can be framed as old news. The prisoner trade was a terrific scandal when it first went down, but the Administration managed to feed the media beast by insisting that it didn’t count as “negotiating with terrorists” because Bergdahl was a prisoner of war. It was bad, but it could have been worse—and now we’re 9 months away from the flashpoint.

On the other hand, neither media nor activists have forgotten that we gave up 5 high-profile al-Qaeda members in exchange for Bergdahl’s freedom. If any one of those 5 prisoners reconnects with extremists in the Middle East and rejoins the fight, things will get complicated for the White House, and they’ll have to be careful to not dig themselves into a hole.

I should say, dig themselves deeper into the hole they started when they chose to make deals with extremists.

Our black messiah is not that great a negotiator … but he does have a Nobel [LOL]. What will his excuse be … we had limited intelligence at the time? Why not the truth … we wanted to release the TOP 5 Gitmo prisoners and this gave us cover.

Have no fear. The same negotiating team is working on a nuclear accord with Iran.

It’s really difficult to outdue the Palestinians to become the “worlds worst negotiator.”

There will be no death penalty. We’ll be lucky if he gets an Other than Honorable Discharge.

We still don’t know how much money Obama gave the terrorists for Bergdahl. And no one in the Press will ask him.

“And no one in the Press will ask him.”

The haunting refrain of our time.

Who among us would ever expect any truth from BO or his people? I get my news off the internet, so I don’t actually SEE his lips move–bad enough reading about it.

Ah, the price of a photo op opportunity.

Dunno what will stick in the future on the ‘obama years’ … but the Rose Garden with Bergdahl and his parents will now be sure to be included in any book.

Floral arrangements? The florist was shuffled out the door!

Was Jimmy Carter’s time in office this memorable? All I can remember is him slogging his suit luggage over his shoulder. And, then some funny pronunciation of “Jordan.” You were supposed to pronounce it more like ‘jerk’ than ‘jaw.’

No one in the press has gained a reputation, here. While I do remember Sam Donaldson. Because probably wore a toupee that defied gravity and never flew off in the wind. And, he was always shouting questions at Reagan. Ah, and Reagan would cup his ear and smiled. Our press has been dead for a very long time.

Wasn’t Bergdhal up for something like a half a million dollars from the military in back pay?

If E-5s got paid that much, I would still be in…

Send him to Utah!

My prediction: He’ll be judged guilty of desertion, sentenced to forfeiture of pay, and imprisonment. The latter will be suspended since he spent five years in captivity. Then discharge.

I would have predicted an other than honorable discharge, but I’ve read on milblogs that the court in question doesn’t have jurisdiction over that.

One wonders: can the President pardon someone found guilty under the UCMJ?

UCMJ is federal law, and the President can pardon those convicted under federal law.

Life in prison? He won’t last long there unless it’s a super max prison. Should have stayed with the enemy. Sorry that your mommy and daddy brought you up wrong.

I predict the general(s) who allowed this prosecution to go forward will be “retiring” soon.

A little music for Bergdhal as he awaits trial…

This is all a show, he will be convicted of Desertion but not the Misbehavior Before the Enemy charge. Then they will count this time in “Confinement” as a “POW” as time served and due to his hardships as as “POW” they will give him a Bad Conduct Discharge or a Less than Honorable and he will be free to go back to his traitor family and live happily ever after. Then he will get a book deal.