Another Migrant Shakeup as Hungary Closes Border with Croatia

Another Migrant Shakeup as Hungary Closes Border with Croatia 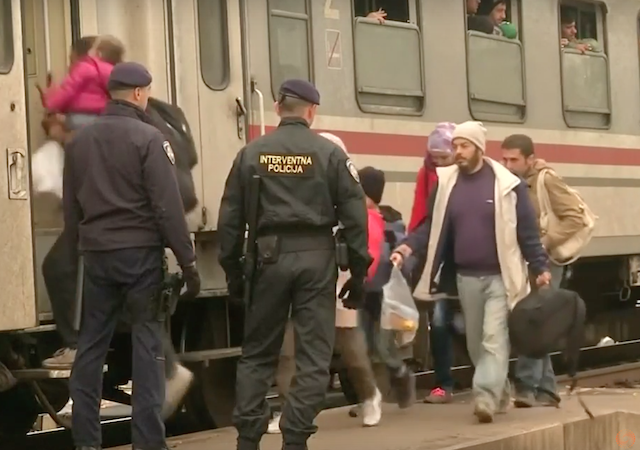 Over the weekend Hungary physically closed another border crossing area to migrants attempting to reach Germany and other safe havens in western Europe. Although the border has been closed to what officials are calling “economic migrants,” law enforcement will still allow asylum seekers to cross the border.

The entry points are now sealed with a metal fence, which means that the now- hundreds of thousands of people currently trying to work their way through Hungary, Austria, and into Germany will either end up stranded in Croatia, or flood Slovenia.

Officials worry that this latest closure will create yet another “bottleneck” situations in the smaller (or, in Slovenia’s case, positively tiny) Balkan countries as migrants attempt to push their way through.

Slovenia accepted 2,500 migrants from Croatia during the weekend, near the maximum it can process, Bostjan Sefic, a state secretary at the country’s interior ministry, told reporters in Ljubljana Sunday. Croatian authorities sought to send 5,000 migrants, which Sefic said it unacceptable as Austria says it can take on about 1,500. The number of people arriving into Croatia from Serbia fell to a third of recent volumes.
Hungary’s decision to seal its border with Croatia on Saturday could spark a chain reaction by narrowing the thoroughfare for refugees from Syria, the Middle East and North Africa heading for more prosperous European nations. German Chancellor Angela Merkel, who has urged the continent’s political leaders to help people fleeing poverty and war, on Sunday sought Turkey’s help to stem the influx during an official visit to Istanbul.

“We are going to address the situation on a day-to-day basis,” Helena Biocic, a spokeswoman for the Croatian police, said by phone Sunday. About 2,300 migrants arrived in Croatia from Serbia by early Sunday afternoon, about half the usual volume, compared with about 5,200 on Saturday, the nation’s police said on its website., without giving a reason for the decline.

Hungary’s actions have caused a significant amount of tension with Germany. In the past months, Germany has encouraged the eastern and Balkan nations to ease restrictions on migrant entry; these overtures, however, have been met with significant pushback.

Hungary dismissed as insufficient a proposal at an EU summit on Thursday to give Turkey 3 billion euros ($3.4 billion) in aid and the prospect of easier travel visas and “re-energized” talks on joining the bloc if it helps stem the flow of migrants across its territory.

Hungarian Prime Minister Viktor Orban, one of Europe’s most vociferous opponents of immigration, wants the formation of a joint force to protect the borders of Greece, where most migrants arrive across the Aegean Sea from Turkey before heading north through Macedonia and Serbia. Without that, his government said it was left with no choice but to seal the border.

In Germany, a government official who declined to be named said the Hungarian border measures did little to solve the problem. “The measures run counter to our efforts to establish EU solidarity,” the source said.

Slovenia, a small country of 2 million people, says it will allow in as many migrants as it is able to register and accommodate and put the army on standby to aid the effort.

“At the moment there are no problems and no need to use the army, but it is right to have such a plan if needed,” Interior Ministry state secretary Bostjan Sefic told a news conference.

Hungary was criticized last month after authorities declared a state of crisis all along the country’s southern border with Serbia. All crossing points were sealed, and only those migrants who had officially applied for asylum were allowed to enter the country. The freeze extended all along Hungary’s border, protecting counties in Hungary covered by the ongoing official state of emergency.

This move infuriated Serbian officials, who were already strapped for cash and resources devoted to maintaining livable conditions for stranded migrants trying to enter the Schengen Zone.

I was about to make some snarky comment. But, really, when you read the stories coming out of Europe, Middle East, Israel one feels a certain quickening of the pace of history. We may very well be living in a time … such as … the years just prior to a World War.
Don’t you have a feeling that people’s eyes are about to be opened? That all the focus on globull warming, gay marriage and income equality is so much froth and about to be exposed as such.

I think that Slovenia and Austria are taking the brunt of this invasion right now. I cross from Slovakia to Austria at the Bratislava/Kittsee border once or twice a week and there are usually several dozen Austrian police checking cars and all trucks. The real problem is at Nickelsdorf about 10 miles south of us.

Went to our home in Croatia last week but kept clear of Hungarian route, going Bratislava-Vienna-Graz-Maribor-Zagreb-Rijeka. Then a few days later on to Venice Italy for the World Slow Smoking Pipe Championship. Crossed from non-Schengen Croatia into Schengen zone (Slovenia) north of Rijeka at the Pasjak/Starod crossing, 2 cars were in front of me and all 3 of us were waved through at both border stations with no passport control. Coming home Italy/Austria border at Villach was unattended.

You can’t leave your door wide open and advertise free stuff on the front of your house and not expect a horde of people to come clamoring in. When your nice stuff is all gone, everything is trashed and the place reeks of filth, you’d have nobody to blame but yourself.