Foreign Press covers for terrorists, now the terrorists have put them in danger 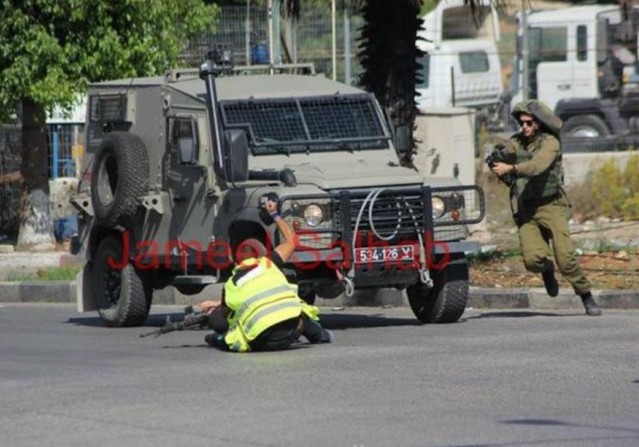 In the recent spate of knifings, firebombings and rock attacks, the international press has done a masterful job of portraying the Palestinian attackers as the victims through misleading headlines.

This is consistent with the international media bias seen during the 2014 Gaza conflict.

The international press plays a critical role in instigating attacks for the cameras. This video posted in 2012 shows how the theater takes place:

Nonetheless, the international press is free to roam in areas controlled by Israel.

So this should come as a shock to the international press — a Palestinian wearing the type of clothing (including a large “PRESS” sign) worn by reporters stabbed an Israeli soldier:

The Foreign Press Association in Israel issued a condemnation:

The Foreign Press Association understands a Palestinian posing as a local news photographer and wearing a t-shirt marked PRESS stabbed an Israeli soldier in Hebron today (Oct. 16). We utterly deplore this violation of press privilege and call on local Palestinian media organizations to immediately verify all media credentials to ensure there are no violations. The FPA represents the foreign media working in Israel and the Palestinian Territories and tightly restricts the issuance of FPA credentials. This attack was carried out by someone posing as a local Palestinian journalist. All the same, it marks a worrying development that demands that all media operate with heightened caution in the West Bank and East Jerusalem. This incident is also clearly of grave concern to the Israeli security forces. As the FPA, we try to work closely with the IDF and the Border Police to ensure coordination is clear and that all dangers are minimized. We urge the continuation of that cooperation and coordination to avoid any attack like this happening again in the future. 16th October 2015

Overnight Palestinians also set fire to Joseph’s Tomb, a Jewish religious site in Nablus, controlled by the Palestinian Authority. How did CNN report it? As a spontaneous fire:

Overnight #Palestinians set ablaze Joseph's Tomb, in a blatant violation of the basic value of freedom of worship. pic.twitter.com/qsOCRFg205

"Catches fire"? A Palestinian mob set fire to a Jewish holy site this morning. This is how @CNN reported it. pic.twitter.com/sVe8zr8ows

It would almost seem the rock throwers are performing for the media. But that can’t be, the media is only there to report on the facts as they occur.

Just the dead or injured Arabs.

LHC, that is sweet writing there. Kudos.

Just for the record, Bibi said he’s all fed up with this violence. Other than saying it’s about time, I wonder whether he will do those things that will actually work. Such as taking any terrorists that aren’t killed in the act and tossing them in the Jordan River, along with a warning that if they touch the Israeli riverbank they will be shot dead in the water.

**World Opinion = in this, as in many cases, BDS-Lite … Seems great! Less anti-Semitic sounding!)

The political insanity that has gripped the Arab world since 1929 – no 1920 or 1921 – is spreading slowly throughout the world.

What needs to be done is that political insanity must be called out.

Instead, a lot of people are attempting to be fair and balanced.

There are times when you can either be fair OR balanced – but you can’t be both.

This is one of them – when to be balanced is to live in an alternative reality.

If you are fair, you are not balanced, and if you are balanced – even a little bit – you are not fair – AND YOU CONTRIBUTE TO THE PROBLEM.

Once a terrorist has been captured and neutralised he is strictly protected by Israeli law, and anybody who so much as hits or kicks him, let alone shoots him, is guaranteed serious legal trouble. And there’s nothing Netanyahu or any elected official can do about it, because the legal establishment supports this state of affairs, and they are the ones with all the power.

The Palestinian leaders are placing children, and now reporters’ lives at risk.

Is that a problem for them? It is, actually, a little bit, because they could lose access to the press, if the orpress leaves the area, but this occurred only at the Gaza border, so they won’t.

And besides, while maybe Israelis won’t trust the press but Arab officials know they won’t be attacked by people disguised as reporters. At least not yet.

Still, the press might be angry. The people involved are going for broke here, now, and I am not sure why.

Press Release(s):
“A Palestinian dressed as a reporter stabbed an Israeli soldier today, SecState John Kerry called for both sides to stop the cycle of violence.”
“Joseph’s tomb was attacked and set afire by Palestinian terrorists, SecState John Kerry called for restraint on both sides. President Obama called the spontaneous combustion of the tomb a shame.”

Go to Youtube and watch the 18 minute documentary called “Pallywood.” You’ll never look at the conflict the same again.

They seem to be pulling out everything ever used in the history of terrorism. The attack by someone disguised as a reporter reminds me of the assassination of Ahmad Shah Massoud in Afghanistan, on September 9, 2001, two days before the September 11, 2001 attacks.

(and probably in anticipation of them – one purpose of the attacks probably being to get the opposition to the Taliban in Afghanistan to give up hope – i.e. if the Pentagon is attacked and nothing much happens, then surely the Americans will not help them, and this would leave them with no one to help.)

I’m surprised nobody has asked the obvious question, so I’ll just go ahead and ask it:

I mean, the international press has been stabbing Israel in the back for years and years.

Report from Israel as of Friday morning: All sorts of public places are almost deserted.