The discovery prompted a police raid of the abortionists home 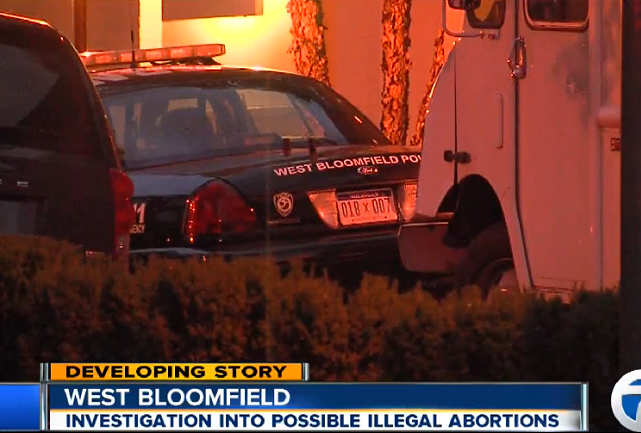 In a word — horrific.

Two weeks ago, abortionist Michael Roth hit a special needs child while driving. “14 containers of human tissue, possibly fetuses, medical equipment and large amounts of Fentanyl,” were found in his car according to Detroit local news. It was this discovery that lead to the police raid of Roth’s home Wednesday afternoon.

According to WXYZ local news, investigators believe Roth may have been performing illegal abortions. As of today, no charges have been filed:

7 Action News has learned police in West Bloomfield found questionable evidence in a trunk of a car that suggests an area doctor may have been performing illegal abortions.

He has been identified as Michael Arthur Roth. Roth is under investigation, but he has not been charged.

Sources confirm 14 containers of human tissue, possibly fetuses, medical equipment and large amounts of Fentanyl, a drug used for pain and sedation, was found in a car owned by the doctor who works as an OB/GYN.

The case started two weeks ago when the doctor was driving on 14 Mile west of the new roundabout at Orchard Lake.

He hit a special needs child who was critically injured. Sources say the doctor was not under the influence and obtained a lawyer.

His car was impounded as the accident was still under investigation.

Then last week, officers executed a search warrant to obtain the “black box” data recorder from the car and while inside the trunk they found plastic containers and medical equipment.

Sources say they containers were not labeled and no medical records were in the car.

Steven Ertelt of Life News where we learned of this story, reported:

Roth’s abortion business, the Novi Laser and Aesthetic Center, was evicted in November 2014 from its second office space this year. An eviction document provided to Operation Rescue by long-time pro-life activist Lynn Mills, shows that a court request for eviction from his office at 33200 West 14 Mile in West Bloomfield was filed on October 21, 2014. The eviction was ordered due to Roth’s violation of a provision of his lease.

Roth had until November 27, 2014, to vacate the premises. Photos taken through his office windows on November 25 show that the office was empty and Roth had already moved out.

Mills told Operation Rescue that she had conducted a literature drop just prior to Thanksgiving featuring information about Roth’s abortion business and his involvement in a tax fraud case. Roth moved out soon after.

…Roth has a checkered history of Board discipline and malpractice suits related to botched abortion procedures. Some of the injuries he inflicted during abortions include perforated uteri and bowels, hemorrhage, and at least one abortion he did not finish because the abortion facility ran out of dilators of the size he needed to complete the procedure. One woman required a hysterectomy to save her life. Documents related to these incidents can be read at AbortionDocs.org.

Pro-abortion advocates argue that without government-funded entities like Planned Parenthood, “back alley abortions” would be a commonplace occurrence. Yet instances like the gruesome case of Kermit Gosnell and the Roth case (if true), nullify that argument.

Hoo-wee, that’s a lot of women’s health right there, yep.

The State-established pro-choice cult is slipping and sliding from abortion to cannibalism. Barbaric!

Since Obama/Jarrett nationalized General Motors, all GM vehicles these days come with a spare fetus in the trunk, inflated with Fentanyl to 32psi.

How on earth did Boehner stomach toadying to this lunatic? Why does McConnell keep doing it? And why is Pee Wee Prebus still Chairputz of the GOP?

This is so vile I’m not sure where to approach this from. Why on God’s green Earth did he have fetal tissue in his private car? What was he going to do with it?

It is a death cult that has fed Moloch for forty years. We as a nation deserve whatever judgement is coming. Carthage was razed to rubble and the ground plowed with salt. I can only hope we receive mercy and not justice.

I thought it wasn’t human until after it’s born.

Who would go to a person like this (refuse to call him a doctor)? Someone who devalues life, even their own, for a cheaper abortion. I really don’t know where we’re headed as a nation but I fear I’m not going to like the answer.