“It’s an issue that you might imagine we’re not really that comfortable talking about on email.” 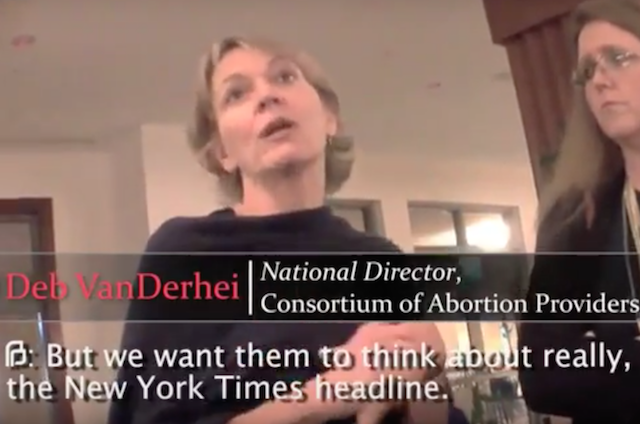 This video is similar to the more recent offerings from CMP’s investigations in that it is light in shocking footage of the actual procurement of fetal tissue, but heavy on content that exposes the corruption between Planned Parenthood and its affiliates. It features conversations between CMP’s actor, a fetal tissue buyer, and Dr. Carolyn Westhoff, Senior Medical Advisor for PPFA; Dr. Vanessa Cullins, Vice President for External Medical Affairs for PPFA; and Deborah VanDerhei, National Director for the Consortium of Abortion Providers (CAPS) at PPFA.

In the video, the buyer presses the issue of “donations for remuneration,” which CMP describes as “[carrying] the connotation of financial reward or benefit without regard for actual expenses.” The officials the buyer speaks to admit several times that “the headlines would be a disaster” if the abortion industry gets caught selling baby body parts for profit before developing a PR strategy to protect the exchanges.

More from the Center for Medical Progress [emphasis mine]:

“Certainly, everything we provide–oh, gonads! Oh my God, gonads. Everything we provide is fresh.” [Dr. Carolyn] Westhoff[, Senior Medical Advisor for PPFA] continues, “Obviously, we would have the potential for a huge P.R. issue in doing this,” before offering to introduce the buyers to “national office abortion people” from Planned Parenthood.
…
“Is this really worth getting–I don’t even know what in general, what a specimen generally brings in?” VanDerhei later asks a prospective buyer. When she is told $100 per specimen, she remarks, “But we have independent colleagues who generate a fair amount of income doing this.” VanDerhei suggests that Planned Parenthood goes to great lengths to avoid leaving a paper trail about their fetal tissue activity: “It’s an issue that you might imagine we’re not really that comfortable talking about on email.”

In a conversation recorded between VanDerhei and Vanessa Russo, Compliance Program Administrator for Planned Parenthood Keystone in Pennsylvania, Russo argues, “A company like this that wants to give our organization money for the tissue–I think that that’s a valid exchange, and that that’s okay.” VanDerhei nods her head up and down and affirms, “Mhm.”

The abortion industrial complex had me at sacrificial rites. The revelation of torture, harvesting, and trafficking is directed to persuade people with sincerely held pro-choice (i.e. selective, variable) principles.

The several state criminal investigations and the MANY civil suits that are working right now will produce some VERY interesting results.

In the mean time, the Federal tax dollars going to Planned Abortionhood should be IMMEDIATELY stopped.

I can’t even shake my head, and say “Poor souls!”

They are obviously soulless.

Every time I am made aware of these conversations, I think of some show like Twilight Zone, where we see or hear these beings talking sweetly about some endeavor (which sounds so well intentioned) but at the end of the show we find they are actually ghoulish in appearance and in the process of doing something hideous.

I guess one of the benefits of being a soulless monster is that you can sleep soundly at night. The rest of us would be plagued by a guilty conscience ~

I’m sure PP will be defunded once Republicans get a majority in the House and Senate, right? They wouldn’t be in cahoots with this bunch of highly paid butchers, would they?

Never mind, business as usual; they have principles you know: nothing gets done unless it’s paid for. That’s a great principle, isn’t it?

My, what a coincidence: “The founder and CEO of StemExpress is Cate Dyer, the younger sister of Charlotte Ivancic, Boehner’s health policy director…” (from Breitbart.)

Maybe. Once upon a time, they ended slavery (e.g. redistributive change, diversity policy, congruence (“=”) policy). Their principles are right. Unfortunately, there are not a few libertines in their midst (i.e. bigots or sanctimonious hypocrites).

“It’s for the children” takes on a very different meaning with a State-established pro-choice/abortion doctrine.

Will the abortionists dismember the bodies and serve the organs and tissue with some fava beans and a nice Chianti?

… or liver pate, or cream-of-fetus soup?

But wait, we do like to consume them. You shoot their byproducts into your kids: chicken pox, rubella, polio vaccines, and more. Ben Carson wants to force those on my kids. He’s fine with labs experimenting on aborted baby tissue.

It’s for the children!