Late last month, Virginia reporter Alison Parker and her cameraman Adam Ward were murdered on-air by a disgruntled former coworker. They woman they were interviewing, local chamber of commerce executive Vicki Gardner, was also shot—but miraculously, was able to walk to the ambulance, and made it to the hospital and through an intense operation.

Vicki’s doctors were cautiously optimistic in the wake of the attack, and kept a close watch for infection. (The bullet came “within centimeters” of taking her life.) But, she pulled through, and yesterday, Vicki Gardner was released from the hospital. From Vicki’s Recovery Page:

Good News! Vicki’s Home! Vicki has been released from Carilion Memorial Hospital. We are thrilled to have her home but she does face a long recuperation time to be back at 100%. Vicki wants to thank all of you for your support and prayers and for respecting her privacy as she continues her journey back to full health. She will make a statement to the media as soon as she has had time to rest up and adjust to her new routine.

In the wake of the shootings, Gardner’s condition became a sub-story, buried beneath ledes about mental illness, gun control, and racism. It shouldn’t have been that way; but the media, as it often does, saw an opportunity to tout an agenda (or, three or four) and did so with gusto.

Fortunately, major outlets eventually picked up on the simple fact that, in the face of such violent hatred, someone had survived. Vicki was hurt, but she had made it. She fielded get well cards and well-wishes from all across the country, and maintained a thankful outlook on what was otherwise an unspeakable tragedy. 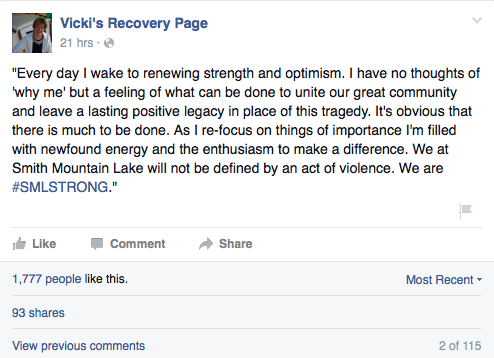 Vicki still has a long road ahead of her, but her doctors are optimistic she’ll make a full recovery.

The gunman (whose name does not deserve any more ink) took two lives on August 26, but he failed to take a third, and that makes a difference. Congratulations to Vicki Gardner—we wish you a speedy and easy recovery!

I really like the way you referenced but did not repeat the killer’s name.

To denigrate media for ignoring victim Gardner is probably not a good idea for any media who also ignored victim Gardner. It kind of looks hypocritical.