Some dare say conspiracy: Who will be first Hillary aide to flip on her?

Some dare say conspiracy: Who will be first Hillary aide to flip on her?

Feds working on the “send” end — but how could Hillary not have known? 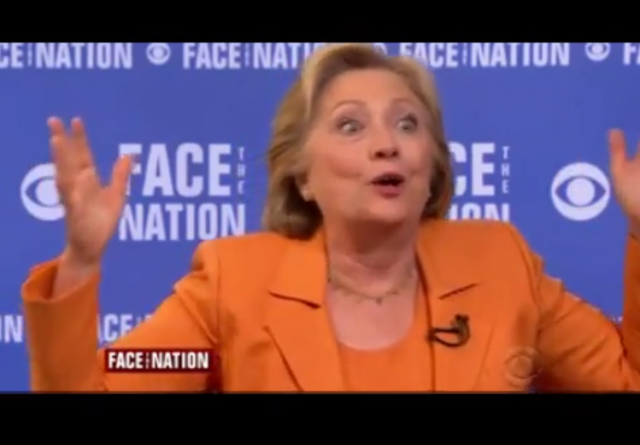 The FBI’s investigation into Hillary Clinton’s private email usage grows increasingly serious. Whether Clinton deleted emails pertinent to a Congressional investigation is only one facet of the unfolding story.

Among the emails made public by the State Department, several were later upgraded to “classified.” a FOIA lawsuit filed by Judicial Watch also found Hillary was not the only individual using a clintonemail.com email. Huma Abedin, one of Clinton’s closest aides, also had an email address with the clintonemail.com domain that was used during Clinton’s tenure as Secretary of State.

Repeatedly, Clinton has said half of all emails sent from her personal email account and contained on her home-brewed server were personal in nature and thus, not passed on to the Department of State for record retention. She’s also claimed that emails sent from secured government email accounts were automatically captured by the State Department. This carefully worded claim does not account for those emails sent to aides like Abedin, who we now know also used a clintonemail.com email address.

What began as an inquisition into the former Secretary handled classified information on her unclassified server has been broadened to include her aides:

That email, which included an update from the Africa Command of the Department of Defense detailing Libyan military movements, is part of the evidence that law enforcement officials say the F.B.I. is now examining as it tries to determine whether aides to Mrs. Clinton mishandled delicate national security information when they communicated with their boss.

The Libyan dispatch, written by an aide to Mrs. Clinton and then forwarded to her by Huma Abedin, one of her top advisers, should have been considered classified, according to intelligence officials. And, they say, other emails to Mrs. Clinton they have found, including one addressing North Korea’s nuclear weapons system and a third discussing United States drone strikes in Pakistan, should have been marked “Top Secret.”

There is no evidence that any of the emails — a small portion of some 60,000 that Mrs. Clinton sent or received as secretary of state — were hacked or caused any harm to American interests, and law enforcement officials have said she is not a target of their investigation. But one of the questions they are seeking to answer is whether her aides or other State Department officials broke federal rules or laws when they sent her information. And arriving at an answer will not be simple, given the complex and often conflicting views of just how diplomatically fragile the information conveyed in the emails actually was.

…Even if Mrs. Clinton’s aides simply summarized classified material provided to them by others — as opposed to forwarding her a classified document — they may have violated federal laws that govern how intelligence information is handled, experts in government classification laws said.

…Ms. Abedin then forwarded it to Mrs. Clinton. While Ms. Abedin would have no clear reason to presume this information was classified, Mr. Davis could be found at fault for distributing the information in an unclassified setting. Mr. Davis, who is still at the State Department, did not respond to a request for commen

Sources indicated earlier this week that the FBI recovered the contents of Hillary’s home-brewed server.

Was there a concerted conspiracy to violate the law, particularly given the fact that Clinton opted for a private email on her person server? Who else knew classified information was being transmitted outside of government purview?

If any of these suspicions are confirmed throughout the course of the FBI’s investigation, will aides then be offered legal concessions if they cooperate?

What were once Clinton’s closest lackeys may end up being her downfall.

Whether Clinton deleted emails pertinent to a Congressional investigation … well this explains the new take by the Clinton campaign that they never wiped>/b> the server disk.

What it seems they did was that they set the e-mails in a course to be routinely overwritten. Which the Clinton lawyers either thought was enough, or did not dare to go further.

This works for most investigations – but then the SEC or the U.S. Attorney, or litigants, don’t usually subpoena the server, and have the FBI, or other people with computer expertise, try to recover data.

Who will flip is a VERY, VERY open question.

There is the example of the McDougals. One of the things I’ve learned about sociopaths/psychopaths is that they attract totally loyal followers, even among very intelligent and virtuous people. They will literally go to prison to protect them, so convinced are they of the predator’s innocence.

I agree, there isn’t a one of them who wouldn’t do 20 years in the pen for her if she told them to.

That beats ending up a victim of Arkancide.

The interesting thinbg is that there would be no record, even if technically this was a violation of law, if they just read to her verbally over the phone. The law may not really be designed very well to work, or make sense.

Of course what Hillary Clinton did was a tremendous violation of procedures, and no more legal than Volkswagon gaming the car emissions testing system.

Everything Hillary said about her emails could have been said by Volkswagon too. It was allowed, it was known (that she was emailing from outside of the state.gov system, that the emissions tests weren’t necessarily representative of what appened in actual use)

There is no evidence that any of the emails — a small portion of some 60,000 that Mrs. Clinton sent or received as secretary of state — were hacked or caused any harm to American interests, and law enforcement officials have said she is not a target of their investigation.

Why the Hell not? Classified information is classified information, and sharing it with people not vetted and approved to view it is a crime. Whether the sharing harmed American interests is secondary (as in, unrelated to guilt, only to degree — think, “irrelevant to the verdict, it will come up in sentencing”). She ordered the private, unsecured server be set up. She opted to use her private e-mail for official government business, contrary to the written laws and State Dept policies. She mishandled information that should have been marked “classified” or “Top Secret”. That’s all on her.

But one of the questions they are seeking to answer is whether her aides or other State Department officials broke federal rules or laws when they sent her information.

Why the blind eye on Hillary!’s (and only Hillary!’s) actions?

When I signed for materials some of it said to the effect that wrongful dissemination could lead to jail of 20 years or more or being tried for treason. Penalty to include capital punishment.

Hillary in front of a firing squad — only in my dreams…

What began as an inquisition into the former Secretary handled classified information on her unclassified server has been broadened to include her aides:

It is very likely that Al Qaeda obtained Ambassador Stevens’ schedule from her server and that’s how they were able to schedule his murder on 9/11.

This is a good analysis of the security failings on Hillary’s server:

Heh. Yeah, the ones where she offered favors in exchange for cash donations to the Clinton Foundation for the Enrichment of Bill, Hillary and Chelsea.

“…and law enforcement officials have said she is not a target of their investigation.”

WHAT? Hillary had better be a target. And which law enforcement officials said that?

Flip? With the everpresent Clinton code of Omerta hanging over their heads, being found prostrate on the ground in an infrequently used Washington Park, dead from five self inflicted bullet wounds to the back of the head, or those airline trips that mysteriously end with the description of “Controlled Flight Into Terrain”. That’ll get’em every time.

There are many possible sets of information in the email server:

2) information embarrassing to the Obama Administration

3) information embarrassing to the State Department

Bet that aide will be Huma. If she has to do a perp walk, she will try to get the best deal that she can. Dropping a dime on the Hildabeast will be her get out of jail free card.