…the sheer number of emails that have been redacted stands as the latest example of how much sensitive material was contained in Clinton’s email transactions. The FBI is conducting an investigation into whether classified information that passed through Clinton’s so-called “homebrew” server was mishandled. Clinton, the Democratic presidential front-runner, has repeatedly denied any wrongdoing.

The emails with redacted sections discussed global issues in countries from Haiti to China to Sudan.

One April 2010 e-mail from Clinton’s top aide Huma Abedin containing a report from then-ambassador to China Jon Huntsman was redacted entirely, while a message from that September about “calls” Clinton said she was willing to make regarding trilateral talks over Sudan was likewise blacked out.

Other classified emails contain discussions about a potential presidential election in Haiti, meetings between U.S. and Cuban officials regarding aid to Haiti in the aftermath of a devastating earthquake in that country, discussions of a conversation between the Russian and American ambassadors to the United Nations, and elections for the presidency of the International Development Bank.

Unsurprisingly, the mainstream media did a terrible job covering the release.

So far, the content that has been reviewed thus far is incriminating both from a transparency standpoint, and from a PR standpoint. Sharyl Attkisson found several e-mails that should have been released back in 2012 as part of a large-scale FOIA request for information about Benghazi. Several other outlets, including The Blaze, noted at least one highly-redacted email that instructed its recipients to both not forward, and to delete the message after reading: 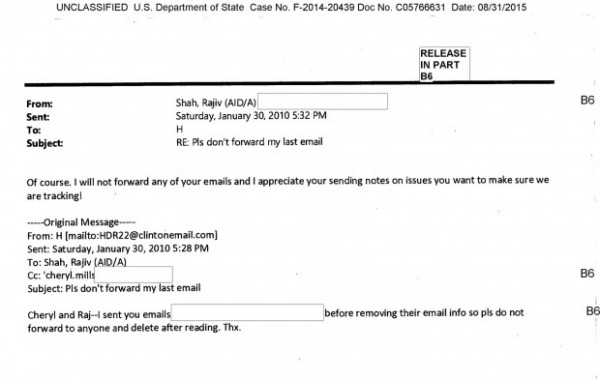 Still other emails hint at a total lack of transparency from key players in what has been billed as the most transparent administration of all time. Right off the bat, we see more evidence that the State Department had no clue what Hillary Clinton was doing with regards to e-mails:

Among those who didn't know about @HillaryClinton private email address? The Help Desk at the State Department: pic.twitter.com/0GrOiT9N2K

No day would be complete without an anti-Israel rant:

What did she speak to Michael Bloomberg about? The world may never know:

One of the 125 or so newly classified emails contained information about conversations with the IAEA:

Another email: Clinton is forwarded a readout from the US rep to the IAEA about chat he had with the director general #nowclassified

All of which of course led to an extremely meta-observation about using a rogue server in the course of running the country:

Mark Penn missing the irony of emailing Hillary on her home-brew server about security concerns of State Dept info. pic.twitter.com/XucFWtI2dQ

Of course, Team Hillary tried to rapid response-away the effects of the doc dump, but we know better than to let ourselves become distracted by…gefilte fish?

More to come. You can access the full, searchable database of Hillary Clinton’s emails here.

It appears from one of the emails that Max Blumenthal needs to take remedial English, has no idea what the word “massacre” means.

I think that it is probably important to keep straight when and how the classified, etc info on her server got classified. Much of this appears to fall into the category that she and her attorneys carved out of emails containing sensitive information that was classified later. She probably knew that much of it would ultimately be classified, but she could honestly clarify that she didn’t receive emails marked as containing classified information – because it hadn’t been classified yet. Typical Clinton splitting of hairs.

Worse, are the emails containing information that could not legally have been sent to her on her private server because it had come to the State Dept marked classified on a secure system. Someone committed federal felonies to get it to her as email. Some are calling this her “air gap” problem.

Understand well your point! Yet, doesn’t federal law state that some subjects are inherently classified, without being objectively marked as such, and especially those originating from foreign sources?

I hear you but common sense says that is a smokescreen… classic Clinton obfuscation.

To me it boils down to a few very simple points:

2) it is completely farcical to think that she conducted business as Secretary of State for several years without sending or receiving classified information. They’ve already identified at least a few of these that were “born” classified and the law doesn’t care whether they were marked that way or not (in fact removing the markings is yet another crime that somebody in her cabal committed).

ergo we know she broke the law and needs to be in jail, not office.

“…Much of this appears to fall into the category that she and her attorneys carved out of emails containing sensitive information that was classified later. She probably knew that much of it would ultimately be classified, but she could honestly clarify that she didn’t receive emails marked as containing classified information – because it hadn’t been classified yet…”

Hillary Clinton can’t use that excuse, Bruce. Almost no classified information comes with classification markings when it’s collected. Appropriately classifying newly collected intelligence is the job of a designated official at all agencies that gather intelligence. Which would include the Department of State as it includes an agency called the Bureau of Intelligence and Research. That responsible official is known as an Original Classification Authority. An OCA could look at this sensitive information and would know not only if the information should be classified, but at what classification level, what caveats it should be marked with, and who outside the USG (if anyone) it could be shared with.

Barack Obama issued two Executive Orders numbered 13526 on 29 December 2009. The link above goes to the E.O. that supplements the earlier E.O. And that earlier E.O. is pretty explicit about how foreign government information (the kind of classified information the State Department most routinely deals with) must be classified. Which would remove any discretion from any subordinate official from a cabinet officer on down.

…(d) The unauthorized disclosure of foreign government information is presumed to cause damage to the national security.”

I said most classified information doesn’t come with classification markings when collected. Some, such as the type State routinely deals with, does.

Hillary Clinton is going to be oh so screwed if this ever goes to trial and she tries to play dumb or split hairs.

I’m glad to see that Hillary likes to wear orange jumpsuits. Before long, she’ll be in one for a long time.

Orange is the new black.

Huma and her husband, Antony Wiener, are both well suited for those Orange pant suits…………

What I’m focused on is from a report on this release by The Daily Caller. In short, Jake Sullivan emailed Hillary saying that in spite of his best efforts, he could not yet email classified data because “ops” had not finished removing the data from a secure network, and that the secure network was set up in such a way that the data could NOT be emailed off the network until the aforementioned “ops” had finished removing it.

So Hillary was consciously demanding info be scrubbed, all *markings* of classification removed, and emailed to her account on her private server. And, she was annoyed that it wasn’t being done as quickly as she desired. So, as I’ve commented elsewhere about it, whoever “ops” is, “ops” is in a huge heap of trouble. And in a just world, Hillary, too. I think it very much is a smoking gun.

You almost must figure that they are trying to run out the clock. In a bit over 14 months, we will be electing our next President, and if it is Hillary, then she very likely won’t be going to jail for this If she wins, she could, of course pardon herself and all her minions. Indeed, that may be the only hope for some of them. And/or, she could just fire all of the US Attys, and make not prosecuting this a condition of employment as a US Atty. Etc. Anyone but a Clinton would probably be too embarassed to engage in this sort of thing. But, I don’t that applies to her. They never have had any shame.

As a vet who served in the Navy in a highly classified and highly secret area I was constantly barraged with the message of the importance of secrecy. We were told that if we were not sure if something was classified we were to assume that it was. Because of my position at the very end of the line of security the ones at the top should have to practice much more stricter regulations for protecting our nations security. The oath they swear to I feel has no meaning to them or they feel it doesn’t apply to them. At any level a breach of security may cause grave damage and any responsible person who wishes to provide only small effort will take pride in the jobs they do for America and take every effort to protect our nation. On the other hand when we elect people who is ruled by their ego and thinks themselves above the “common” people and as such not subject to the same standards we will find ourselves on the road downward to destruction. It takes only a little thought to see we are well on our way for we have been compromised by many of our representatives who want only to rule and not protect.
Grampa

I see how inept these people were at dealing with government secrets, but the ineptness suddenly evaporates when coming to secrets that could potentially send people to jail. I have yet to see a smoking gun and some email has been reclassified B5 so the public and the open sessions of congress are not permitted to see the contents.

I saw dozens of smoking guns. Do you know what to look for?

Probably one of the most obvious examples of a smoking gun is that Hillary Clinton sent Sid Blumenthal classified information.

Sid Blumenthal does not work in government. He’s a private citizen and has no security clearance. Yet Clinton was sending him information that was clearly classified at the time.

Others might not leap out at you. For instance she clearly asked her Middle East envoy George Mitchell to fill her in on a meeting he had with the Italian foreign minister on a subject that was redacted. Which he clearly did, as the entire email response was redacted. But the most jaw dropping thing was she asked him to reply to her personal email. In fact, the subject line was “Here is my email.”

The subject line might as well have been, “Let’s violate the Espionage Act.” Because she wanted him to provide her with classified foreign government information, that information was attributed to a named source (revealing sources and/or methods of collection is a definite compromise), and she asked him to send it to her private mail.

That, my friend, is a smoking gun.

This batch of emails just released destroyed two of Clinton’s main lies so far. That she was just a passive, unwitting recipient of information. And that she never sent classified information.

You couldn’t swing a dead cat around among all these emails without hitting a smoking gun.