“Whenever we have a smooth portion of liver, we think that’s good!” 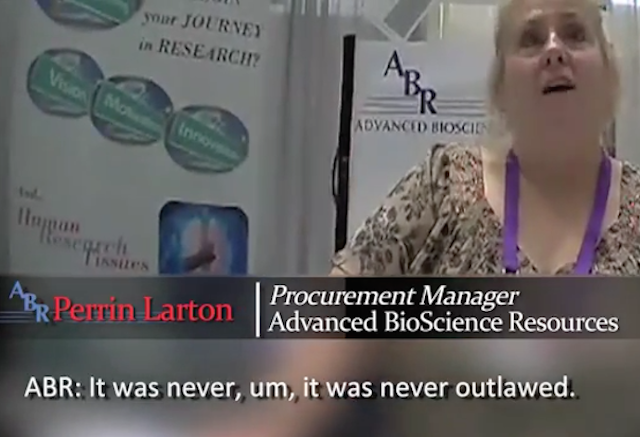 Today, the Center for Medical Progress released the ninth in a series of videos aimed at exposing collusion between Planned Parenthood and tissue procurement clinics for the sale of fetal tissue.

Sheehan explains, “We’ve been using them for over 10 years, really a long time, just kind of renegotiated the contract. They’re doing the big collections for government-level collections and things like that.” When one of the actors negotiates, “We return a portion of our fees to the clinics,” Sheehan responds eagerly, “Right, get a toe in and make it, make a pro–alright.”

She explains of situations where there has been a great enough degree of cervical dilation to procure an intact fetus: “I literally have had women come in and they’ll go in the O.R. and they’re back out in 3 minutes, and I’m going, ‘What’s going on?’ Oh yeah, the fetus was already in the vaginal canal whenever we put her in the stirrups, it just fell out.”

“And they have a smell. It’s just, it’s not right. It’s kind of icky,” Larton says of babies who have been killed with the drug digoxin, which doesn’t allow Planned Parenthood to sell them for their body parts.

At one point in the video, Larton gives the undercover acts two thumbs up — saying “We think that’s good” when body parts are easily obtainable from fully intact aborted babies.

At around the 7 minute mark, we see StemExpress CEO Cate Dyer describing the ins and outs of how ABR operates. She should know—she worked for them before founding StemExpress:

“They were funding places in Hawaii for themselves,” she divulges. “Some staff–not that I know so much on the Planned Parenthood side, but I wouldn’t be surprised–there are some staff in the past that have been on the payroll with ABR.” According to Dyer, ABR would pay an “advisor fee” to a clinic manager or director in order to preserve their exclusive right to harvest fetal tissue at that location. “There’s like, well enough known,” says Dyer, that “for a long time there were certain clinics that because they had paid advisors that were sitting on boards for these clinics, that were also an advisor to ABR, you were just never going to go anywhere with them, you know what I mean?”

Right now, two House Committees are investigating the evidence contained in these videos in an effort to pinpoint which federal laws may have been broken. There’s a lot of evidence to cover—LifeNews has a great breakdown of all 9 videos released so far—but give this one time.

Being able to nail Planned Parenthood for this will be well worth the wait.

Confess that you are a baby and we will torture, abort, harvest, and sell your tissue, organs, and body.

Deny that you are a baby and we will torture, abort, harvest, and sell your tissue, organs, and body.

It’s one thing to devalue capital and labor. It’s something altogether worse to debase or destroy the exceptional value of human life. That way lies savagery.

Who wants to live forever.

From “Amazing Grace, William Wilberforce and the Heroic Campaign to End Slavery” by Eric Metaxas:

“One of the things that became quite clear to Clarkson and to Wilberforce was that the slave trade, like all evil systems, corrupted and ruined the lives of all who touched it.

Many times, history is turned on the invocation of a powerful image, whether it is a visual image or one crafted in words.

They can move the public weal in terms of perceptions of right and wrong.

Let’s hope these do.

And McConnell is already refusing to fight – this one could easily go in the win column with the right PR and Advertising support from Pro-Life PACs. Put those videos on prime time ads and nail PP to the wall with the evidence that they do not perform mammograms. Make it impossible for the Media to defend them without looking like co-conspirators – including putting the faces of every single news person who has been “honored” by PP, even in local markets.

On the upside, McConnell’s surrender is custom made for Cruz to beat the crap out of Congress and have a nice little attention grabbing filibuster at an opportune moment that makes it look like the Republican leadership is colluding with Obama.

And I think Boehner might be in a tight spot with the relationship of his staff members to PP and their bragging about their influence in his office.