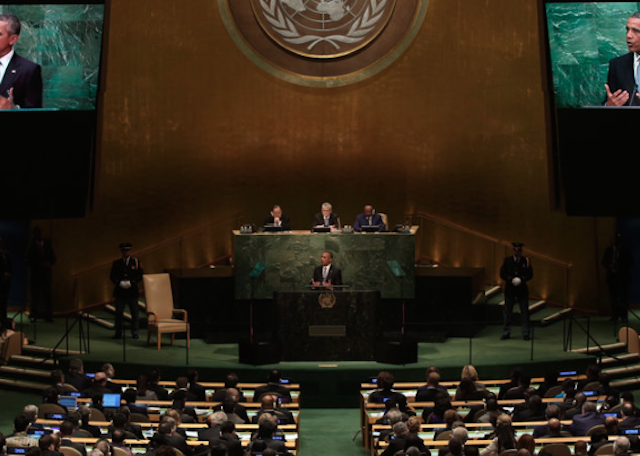 Today before the United Nations General Assembly, Barack Obama and Vladimir Putin sparred publicly over how their respective nations have approached a solution to crises in Ukraine and Syria. For both leaders, these speeches were an opportunity to regain control of a spiraling military, security, and human rights narrative that is now being influenced not only by the spread of Islamic terrorism, but the effects of mass migration out of the Middle East and Africa and into Europe.

President Obama lashed out at Putin over Russia’s aggression toward Ukraine and criticized Putin’s leadership (or, lack thereof) on the Syrian crisis. Oddly enough, though, Obama somehow managed leave himself space to justify a partnership with Russia as a way of addressing conflict in Syria.

Mr. Obama made a forceful defense of diplomacy but also castigated Russia by name multiple times in his speech for its defense of the Syrian government, its takeover of Crimea and its actions supporting Ukrainian rebels.

Those currents include major powers that want to ignore international rules and impose order through force of military power, he said.

“In accordance with this logic, we should support tyrants like Bashar al-Assad who drops barrel bombs to massacre innocent civilians because the alternative is surely worse,” he said in comments that seemed to be aimed directly at Mr. Putin.
…
In his earlier speech, Mr. Obama also chided China for its expansions in the South China Sea and Iran for its support of Mr. Assad, as well as the broader anti-American messages that emanate from the Iranians.

Mr. Obama said that he was realistic, but he said realism had to take into account the brutality of the Assad government in Syria, where war has raged for more than four years.

“Let’s remember how this started,” Mr. Obama said of the Syria conflict. “Assad reacted to peaceful protest by escalating repression and killing and in turn created the environment for the current strife.”

(You can read the full text of Obama’s speech here.)

Putin’s speech, in turn, took a complete 180. He used his time before the GA to bolster Assad’s reputation as a crucial cog in the effort to defeat ISIS in the Middle East. In a clever move, he played to the Eurozone crowd by arguing that Assad’s efforts will help western and other coalition powers prevent the spread of extremism north into Europe.

(Whether or not anyone believed him remains to be seen, seeing as how the majority of Assad’s military efforts in Syria are aimed at plowing over rebel groups.)

Elsewhere, though, Russia has hedged on Syria, and more specifically, on the legitimacy of Assad as a viable leader. In an interview with 60 Minutes, Putin was careful to focus on bolstering the Syrian government at large, as opposed to expressing direct support for Assad:

“We support the legitimate government of Syria,” he said, suggesting that to undermine it was to open the way to the kind of chaos now on show in Libya. But, while Charlie Rose kept peppering Putin with questions about Assad, directly, Putin was careful to talk about the Syrian government in more general terms:

“There is no other solution to the Syrian crisis than strengthening the effective government structures and rendering them help in fighting terrorism,” Putin said. “But, at the same time, urging them to engage in positive dialogue with the rational opposition and conduct reform.”

There are conspiracy theories for everything.

In the Middle East, many believe that ISIS is an invention of the US and the CIA.

Explain how Obama’s actions make any of those folks disbelieve.

You get extra points if you can make Obama look like a leader.

You mean the shadow boxer and the martial arts killer?

Or the checker play and the chess master?

Ok, I’m curious. Do all of these speeches at the U.N. mean anything?

Is this really beneficial at all? Or is this just a dog and pony show to see who is tougher?

The speeches mean something when they are backed up by action, which is what Putin intends to do. Putin understands strategy and he knows tactics. This was a good tactical move on his part. He will back up his dialog and make himself look great.

Look at that picture – Putin staring him in the eye while Obama looks at the carpet.

When Obama drew a red line and it was crossed, he cowered away.
When ISIS went into Iraq Obama turned away.
As rapists and murderers come over the border Obama waves them in.

Obama needs to stop talking, he’s just making himself look worse. He whimpered away like a coward when the time to act on ISIS presented itself, now he goes after Putin for aiding Syria. But, as this progresses we’re going to see Putin and Russia curb stomp ISIS. Putin does not care about the Geneva convention or the UN. He’s going to move on ISIS eventually and when he does, he will brutally remove them from the planet. Everyone will be grateful and Obama will look even worse, which means the US looks worse.

If ISIS starts globe trotting and Putin decides to chase them, it’ll just get worse for the US. Putin is not like old school Soviet leaders. He learns, he changes tactics. He has been studying us and has learned from our mistakes and the mistakes the former Soviet Union made. He won’t repeat them.

If he routes ISIS in Syria we look bad. If he sends forces into Iraq and saves the Yazidis, or Afghanistan or into northern Africa to chase ISIS, we will look like impotent little clowns.

… and worse, he will save the Kurds, much to the dismay of Turkey

Not just the Kurds but probably a lot of Christians which should piss Obama off even more. This man can’t pass up an opportunity to stick it to Christians both at home and abroad.

If we’ll declare another round of sanctions Russia will be isolated, no doubt. In the meantime, if we want to exert power in the middle east, we’ll have to talk to Kremlin.

Don’t worry. We’ve got John Kerry on our side. He’ll kick Putin’s ass.

I read the speech. One thing is certain: Obama is no deep thinker.

Neither are his writers…

Obama is a schumuck of historic proportions. The Al Sharpton of presidents.

One day Obama will be gone and his name will be a derogatory noun, much like the words ‘Boehner’ and ‘GOP consultant.’

Until then, we must fight the scumbag the the corrupt U.S. media wiping his bottom.

In an interview broadcast on the private TVN station, [Russian Ambassador to Poland Sergey] Andreev also said: “Polish policy led to the disaster in September 1939, because during the 1930s Poland repeatedly blocked the formation of a coalition against Hitler’s Germany. Poland was therefore partly responsible for the disaster which then took place.”