“At any time, you could have stopped the escape from happening.” 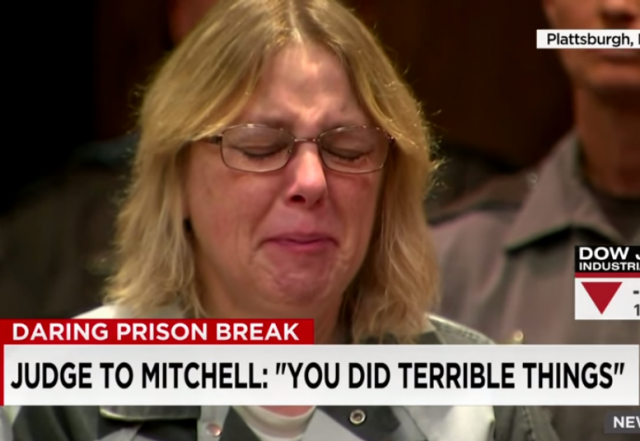 Joyce Mitchell was arrested on June 11 after authorities discovered that she assisted convicted murderers Richard Matt and David Sweat escape from a maximum security prison in upstate New York.

Yesterday, Judge Kevin Ryan threw the book at Mitchell, sentencing her to the maximum of 7 years in prison for first-degree promoting prison contraband, a felony, and a concurrent year for fourth-degree misdemeanor criminal facilitation. She was also hit with over $6000 in fees, and is facing over $100,000 in restitution charges from the state to cover the cost of the three-week manhunt.

The judge added that the economic and noneconomic costs were “incalculable” for people affected by the escape and ensuing pursuit.

“A large portion of the local population were terrorized. Many were forced to flee their homes. Some did not not have places to go, and had to rent hotel rooms or leave the area. Many residents did not sleep for many nights, afraid that these two extremely violent individuals might be outside their homes,” Ryan said. “Law enforcement officers came here not just from across New York state, but from all over the country. They traversed very inhospitable territory, never knowing if the next step they took in deeply wooded areas might be their last. And think of their families at home, sick with concern and fright for their loved ones. At any time, you could have stopped the escape from happening.”

Mitchell cried throughout the sentencing hearing and apologized profusely as she asked the judge for mercy. But Ryan said he didn’t believe her excuse that she took part in the scheme because she was fearful for her family — especially her husband, Lyle Mitchell.

Joyce Mitchell potentially faced additional charges, based on allegations of sexual conduct with one of the inmates and of a conspiracy to have her husband killed.

However, Clinton County District Attorney Andrew Wylie allowed Mitchell a plea bargain in July, saying it was “in the interest of justice,” and it would be difficult to prove that Matt and Sweat planned to kill Lyle Mitchell after the breakout.

Authorities also suspected that Mitchell had engaged in a sexual relationship with at least one of the escapees, and played a part in a conspiracy to kill Mitchell’s husband. Prosecutors, however, allowed Mitchell a plea bargain, saying that it would be difficult to prove the additional charges.

There are predatory people who cannot be allowed to remain alive. They will ALWAYS find victims, anywhere they are.

The death penalty should never be abolished.

She got off light. She should have been charged with manslaughter since one of the prisoners was shot and killed, but I don’t know it New York actually has that law or not. Either way, since she loves prisoners so much she should have to spend the rest of her life with them.

But then again no one would want to live in the world that I ran but me.

The number of women who don’t understand they are called cons for a reason other than it is a shorter version of convict always amazes me.

Well, at least she has a marketable skill to use in prison. Someone in the license plate factory can make her a shingle, Consulting Escapologist.

In my years of working in prisons I saw damn few female officers that did not become compromised sexually by inmates. I know of three personally who have had sexual relations with the inmates and were allowed to keep their jobs or were hired back.

It is a joke. I saw a superintendent who used inmates as security for her office. can’t get much more compromised than that.

You have any phone numbers?

Who knows? Maybe there is karma in this folly?

Maybe Joyce will meet Hillary in the prison system.

Joyce could make a deal and help HRC make a clean ‘scrubbed” getaway. “You scratch my back, I’ll scratch yours.”
Bill, though, would be in the getaway car with someone else.
~~~

She got off ridiculously easy.