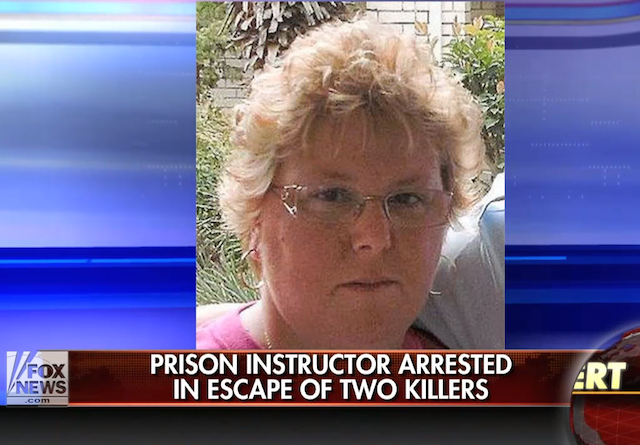 Convicted killers Richard Matt and David Sweat are still on the run after escaping a maximum security prison in upstate New York late last week, but investigators have since revealed that they suspect a prison employee aided in the convicts’ flight.

Joyce Mitchell, 51, was arrested yesterday and charged with Promoting Prison Contraband in the 1st Degree and Criminal Facilitation in the 4th Degree. If convicted, she could face up to eight years in prison.

Earlier, [District Attorney Andrew] Wylie said Mitchell, a supervisor in the prison’s tailoring shop, brought “contraband” into the prison but he declined to elaborate on what, specifically, she gave the men.

The Albany Times-Union reported late Thursday that Mitchell told New York State Police she gave Matt, 48, and Sweat, 34, access to a cell phone and smuggled tools into the prison.

A police source close to the investigation confirmed to Fox News Friday that Mitchell planned to provide a getaway car for the two convicted murderers but had a change of heart at the last minute. Mitchell instead checked herself into a hospital some 40 miles away from the prison, complaining of panic attacks, according to law enforcement.

Mitchell joined the prison staff in March of 2008 and earned $57,697 a year. She was suspended without pay, effective Friday.
…
The Times-Union also reported that Mitchell had been investigated in recent months by the state corrections department’s inspector general after a fellow prison worker complained that she had gotten too close to Sweat and Matt. That investigation did not result in any discipline.

Investigators are focusing their search in and around the small town of Cadyville, NY. Bloodhounds picked up Matt and Sweat’s scent during an initial search, and soon after residents were instructed to turn on their outside lights and take cover in their homes.

According to local officials, if they’re still in the area the two convicts haven’t been having an easy time of it. Former supervisory deputy US Marshal Steven Sinofsky says that, while it’s difficult to tell whether or not the authorities are close to a break in the manhunt, it’s likely that the two fugitives are still very close to the prison.

We’ll keep you updated on the progress of the manhunt.

Let’s not rush to judgement. (S)he might be a transgendered African American with various stress disorders.

Yep. I figured this the first time the escape was detailed.

Poor, stupid, lonely woman. I hope nobody gets killed or hurt by the cons before they are taken down.

What she did was akin to treason. The shame of it is that so far, she’s only looking at 7 years in prison. She deserves life.

Treason? Is that still a thing?

Only for George Bush.

How the heck did they do an “Investigation” and find nothing wrong here? Sounds to me that facility needs an administrative enema.

Yeah she is guilty, but I blame liberals, for fighting the death penalty for the worst murderers. The cost of keeping these animals for forty years is outrageous, and now two might be out taking more lives, or at least cost tens of millions for the hunt, and more for loss of economic activity in the area.

And then there are the illegals that have packed our prisons, or are released not deported, after committing crimes. All part of the grand plan to corrupt and weaken our country, it would seem.

I propose giving marijuana to prisoners, instead of weights. Keep them weak, dazed and confused, not muscled and hardened gang members, or Black Panther Muslim converts.

She somehow passed along small tools and blades. How did they manage to cut through a giant cast iron pipe, making a perfectly straight large hole. I am thinking they would need a reciprocating saw. No one has found the power tools? My husband has one of those, and it is huge, not something you could easily hide.

I read elsewhere that a grinder and chisels were used. So they’re not just murderers, they’re chiselers too. Nyuk, nyuk.

She must be a Democrat. She believed what the crimnals said.

According to a comment on a newspaper website, she was previously fired from another prison for fraternization, and applied for and received this job under her maiden name. And background checks didn’t catch it. Unconfirmed, but if true…

I have also heard that she agreed to meet them outside with a vehicle and then chickened out. If this is true, she saved her own life, since they would certainly have killed her and taken the car. I hope these men don’t kill anyone.