The Iranian President doesn’t go quite as far as Prof. Juan Cole. 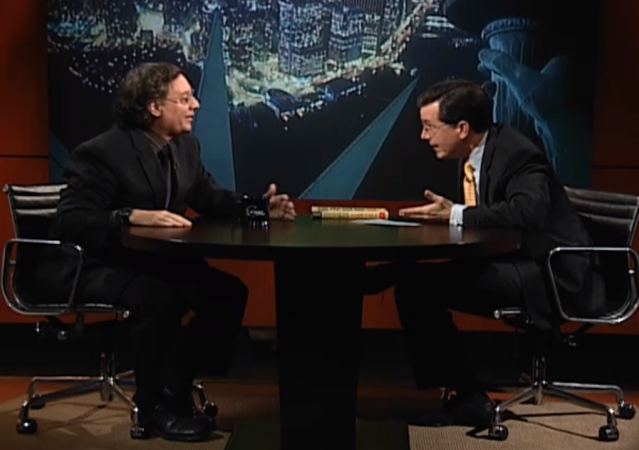 Iranian President Hassan Rouhani confirmed what we all, ahem, knew, that when hundreds of thousands of Iranians led by the Iranian leadership chant “Death to America,” they don’t really mean it.

He didn’t say “I’d really like to visit Disneyland,” but he did downplay the significance.

What they mean is, well, here’s the explanation, on 60 Minutes:

Steve Kroft: I’m sure you realize that it is difficult for many Americans to get past the fact that President Obama has signed an agreement with a country that says, “Death to America, Death to Israel.” How do you explain this? What are they to make of it? Are they to take it literally? Is this for domestic, internal Iranian political consumption? What are Americans to make of it, the language?

President Rouhani: This slogan that is chanted is not a slogan against the American people. Our people respect the American people. The Iranian people are not looking for war with any country. But at the same time the policies of the United States have been against the national interests of Iranian people. It’s understandable that people will demonstrate sensitivity to this issue. When the people rose up against the shah, the United States aggressively supported the shah until the last moments. In the eight-year war with Iraq, the Americans supported Saddam. People will not forget these things. We cannot forget the past, but at the same time our gaze must be towards the future.

Steve Kroft: “Death to America” is very simple concept. Three words, not much room left for interpretation. Not very conciliatory. Do you see the day when that language will not be used? You yourself have encouraged both sides to try and lower the temperature.

President Rouhani: If America puts the enmity aside, if it initiates good will, and if it compensates for the past, the future situation between the United States and Iran will change.

See, the Ayatollah and the crowd here are just having fun:

This seems like a good time for a flashback to a 2009 appearance by anti-Israel U. Michigan professor Juan Cole on the Colbert Show, which included this gem:

Steve Kroft: You have been very temperate in your statements about these negotiations. You have been trying to encourage a sense of goodwill between the United States and Iran, but some of this — some of the success has been undercut by very harsh statements from both sides. Since the deal, the Ayatollah Khamanei has endorsed, even praised, the chanting of “Death to America” and “Death to Israel” at the Friday prayers by demonstrators and he continues to call the United States the “great Satan.” Do you believe the United States is the “great Satan?”

President Rouhani: The enmity that existed between the United States and Iran over the decades , the distance, the disagreements, the lack of trust, will not go away soon. What’s important is which direction we are heading? Are we heading towards amplifying the enmity or decreasing this enmity? I believe we have taken the first steps towards decreasing this enmity.

Steve Kroft: Do you think the United States is the “great Satan?”

President Rouhani: Satan in our religious parlance is used to refer to that power that tricks others and whose words are not clear words, do not match reality. What I can say is that the U.S. has made many mistakes in the past regarding Iran, and must make up for those mistakes.

I wonder how they interpret the nuke deal documents, if their own words don’t mean what the words plainly mean.

Eh? What would anyone expect Rouhani to say on American TV — that yes, they really mean “death to America”?

Yeah, and when Khrushchev beat on the podium and raged, “We will bury you!”, it was about a roach problem at the UN.

Why did seeBS even air this nonsense? Oh, yeah! To polish Barracula’s MAD Deal turd.

Are there people gullible enough to BUY this BS? Well, SOMEBODY is watching “60 Minutia” still.

Perhaps we can look at their actions to see how we should interpret their words.

Didn’t Chico Marx ask in Duck Soup “Who you gonna believe, me or your own eyes?”

Without “being hasty in our judgment”, why wasn’t the following asked of President Rouhani?

If “Death to America” is just a euphemism for “we hate Western values”, then why send out messages encouraging terror cells to kill Americans, to kill Westerners? And, why would these same chanting Iranians want to go to Disneyland, an iconic Western landmark (dare I say it?), to gratify themselves?

President Rouhani: “I can say is that the U.S. has made many mistakes in the past regarding Iran, and must make up for those mistakes.”

OK, then. Come to Disneyland. We WILL make it up to you. The “Great Satan” awaits.

You seriously think someone from See? BS!, the network of Walter and Dan et al. would actually have a sense of journalistic responsibility instead of merely being their party’s mouthpiece?

They’re not considered part of the “Lame Stream Media” for nothing.

No. My questions are rhetorical and are meant to point out the disturbing irony and dishonesty of what we are being told by Iranian President Rouhani and Prof. Juan Cole.

“Cole: Even the ones who are chanting “Death to America,” if you get them to the side, they say well you know “could you get me a visa. I’d really like to visit Disneyland.”

No what that represents is a perfect example of the “courage of the mob” vs the “cowardice of the individual.”

If we started saying “Death to Iran” then maybe they’d think twice about that Disney vacation. If they really don’t mean what they are saying, then it’s time to stop saying it.

Ummm … it’s not entirely inconceivable to want to visit Disneyland before your wildest wet dreams of the death of the Great Satan come to pass.

I mean, didn’t the 9/11 terrorist hijackers enjoy liquor and strip shows before their Islamic kamikaze mission?

The media are hyperaware of rhetoric which incites. But only when it’s Sarah Palin and the Tea Party talking about lower taxes and smaller government. Then the media see sinister veiled violent threats of all sorts.

Iran had better be careful or the media might sit up and take notice of calls of “Death to America” and “Death to Israel.”

Let me express my love and admiration by saying Death to Iran, a phrase of endearment in rural North Carolina.

“If America …initiates good will, and if it compensates for the past…” There it is right there… they have their hand out. And this pathetic clown-car administration once again rolled over and showed it’s soft belly.

They want nuclear weapons and I would accomodate them.

I agree, though I would deliver them at a velocity that would probably not be appreciated.

The key phrase in Rouhani’s explanation is “And if it (America) compensates for the past…” Iran feels as if we owe them something and the real question is how much and what? It would seem that nothing short of a complete conversion of America to Islam, particularly their flavor of Islam, will be sufficient to “compensate for the past”.