Marco Hits Back at Hillary in Puerto Rico

Marco Hits Back at Hillary in Puerto Rico 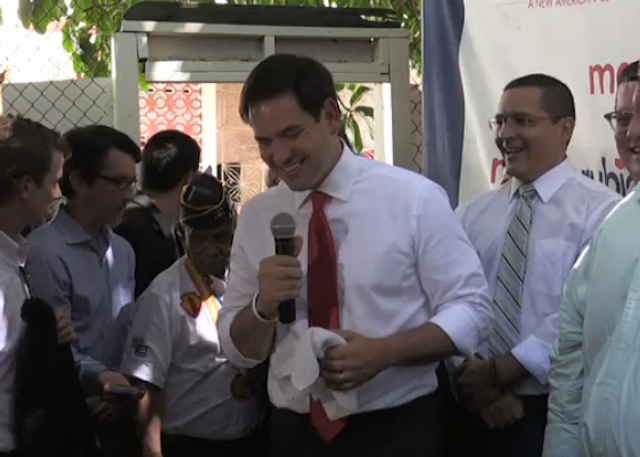 This week top presidential contenders from both parties journeyed to Puerto Rico to talk economics, health care, and the future of the commonwealth’s place in American politics. Puerto Ricans won’t vote in the presidential election, but their 23 delegates could mean the difference between life and campaign death in a field as crowded as the GOP’s is, and the Democratic Party’s is likely to become; and both Hillary Clinton and Marco Rubio appeared determined to stake their claim.

Their events were only miles apart, but represented stark differences in the way the two candidates are courting voters. Marco Rubio played to a packed neighborhood bar, and made his speech (mostly in Spanish) while unabashedly wiping the sweat from his face. He made a point to jab at Clinton, referencing the scandal surrounding her private server, and predicting that her vision for Puerto Rico would be limited to the same policies that have contributed to the country’s current fiscal crisis.

Rubio said the island faces multiple challenges, but remained firm that allowing its municipalities and agencies to declare bankruptcy is not the answer.

“I don’t believe Chapter 9 would solve Puerto Rico’s problems,” he said, adding that the island has spent more money than it had available. “Ultimately, if there is no other option left, Chapter 9 is a viable option at that point.”

Asked about Clinton at a brief news conference after his speech, Rubio said he didn’t have details about her plan for Puerto Rico.

“I think it was on her server, and it was wiped clean,” he jabbed, a reference to the Clinton email server that is now the subject of a federal investigation.

Clinton’s meet and greet was a more subdued, invite-only policy roundtable; however, she won the commonwealth’s 2008 Democratic primary, so she could be banking on residual support, as well as her rejection of “austerity” measures as a method of bringing balance back to the struggling economy.

A 10-minute drive down the highway, Mrs. Clinton held a round-table event at the Centro Cardiovascular de Puerto Rico y del Caribe, where she focused on the health and economic challenges facing Puerto Rico, whose government is in a financial crisis and struggling to pay $72 billion in debt.

After arriving an hour late, Mrs. Clinton sat and did more listening than talking at first — “I came here to listen,” she told the panel — nodding and taking notes as seven health officials and practitioners listed issues plaguing Puerto Rico’s health care system, from struggling with Affordable Care Act regulations to an exodus of talented doctors to the mainland. One of the panelists handed her a magazine, and while Mrs. Clinton recognized it was in Spanish, she said she got the message.

“I can read crisis and crisis,” Mrs. Clinton said, to a few laughs from the crowd.

An hour late (like Obama, showing total contempt), Hellary has a meeting at a cardiovascular clinic in Puerto Rico, the sick man of U.S. territories.

Too rich. I wonder if anyone on her panel was under 50?

You mean they get to cast delegate votes for our country’s president??? What in Sam Hill is our need to keep PR?