Keep an eye on the Castro brothers

Keep an eye on the Castro brothers

A force to be reckoned with 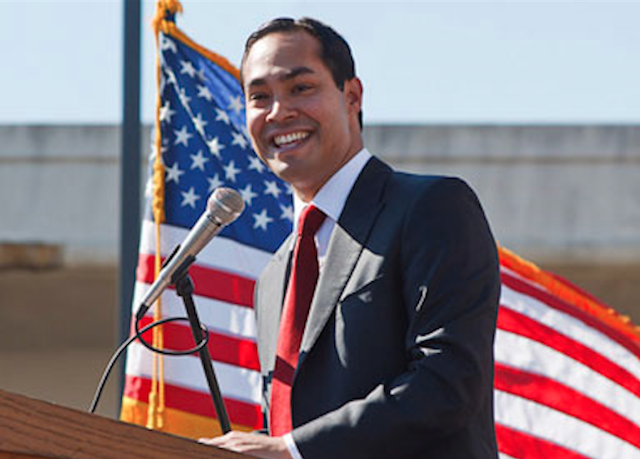 Right now, the Democratic field feels both random and predictable: we have Hillary Clinton, who should be the anointed one; Bernie Sanders, whose numbers defy reason; and Joe Biden, who everyone laughs at but no one counts out. Martin O’Malley, Jim Webb, and a few others round out the top tier, but don’t get near the attention that Clinton or Sanders are able to pull.

If Hillary or Bernie get the nod, then, who steps into the VP slot? That person could come from the current field—or he could come from inside agency land, with a little help from his twin brother.

Julian Castro and his identical twin brother Joaquin have been the objects of the left’s affection since Julian stole the show at the last Democratic Convention, and now they’re making their way toward the front lines of the progressives’ full court press against the GOP’s high-profile presidential bench.

In 2014, President Obama appointed former San Antonio Mayor Julian Castro to the post of Secretary of Housing and Urban Development. The appointment was less of a policy move and more of a tucking-away for safekeeping; Julian is being groomed, and many Democratic operatives believe he belongs in the #2 slot on the ticket:

Democratic National Committee Finance Chairman Henry Muñoz told BuzzFeed in May that Castro “deserves to be on the short list,” and New York City Council Speaker Melissa Mark-Viverito, who was born in Puerto Rico, said the concerted effort from Hispanic leaders to promote Castro reminded her of the united rally around Sonia Sotomayor when she was under consideration for a Supreme Court nod.

Clinton and Castro haven’t spoken since they appeared together on a panel in Washington in April, but people close to the campaign acknowledged that it’s politically useful for the candidate to keep his name in the public conversation, long before her operation formally starts vetting prospects. That way she can implicitly emphasize to Hispanic voters that she is taking their concerns about representation seriously.

“A lot of Latino Democrats are concerned about what happens if Marco Rubio becomes the [Republican nominee], or Jeb Bush, or even if Scott Walker becomes the nominee and he chooses Rubio to be the VP,” said a Democratic strategist close to the Clinton camp, adding that many see Castro as an easy solution to the dilemma.

And while the early pro-Castro campaign is risky, it effectively ensures he will be considered seriously when it comes time for Clinton to choose a running mate, assuming she wins the nomination.

Any high-profile run at the Vice Presidency (Castro as well as his allies deny the allegation) is bound to attract detractors—and Castro’s has—but the Clinton campaign’s focus on Latino outreach makes the position a logical target, and Castro is quietly making the most of it.

Julian Castro is just one of a set. His brother, Joaquin, rose in the Texas House of Representatives before securing a San Antonio-area Congressional seat. Joaquin Castro lives to antagonize Republicans—and (based on my experience) manages to do so while still maintaining an aura of likeableness and approachability that could prove tricky for conservatives aiming to counter his message.

Hillary Clinton, to her credit, has decided to harness Joaquin’s talents by making him part of her surrogate pool. He spent the end of last month campaigning for Clinton in Iowa, reaching out to the Latino community, hitting Bernie Sanders over lackluster outreach, and whipping up the base with horror stories about what a Republican-controlled Washington would look like.

From the Texas Tribune:

“I would submit to you that would be the largest and biggest and most brutal American dragnet this country has ever seen, and it would be scary and it represents the worst of America and it’s not befitting of those who seek the presidency,” Castro warned. “We’ve got to make sure these people are not elected to any office, much less the highest office.”

“If this is how they’re talking before the election, can you imagine what happens if one of those guys is sitting in the Oval Office, issuing executive orders?” he later said. “All of the advances that we’ve made, all the progress we’ve made towards comprehensive immigration reform — if these guys are elected, they are gone. It’s done.”

It was one of several themes Castro sounded Sunday as he worked his way across eastern Iowa into Des Moines, drawing low-key but appreciative crowds in his debut trip as a Clinton surrogate. It likely won’t be his last, as he — and possibly his twin brother, U.S. Housing and Urban Development Secretary Julián Castro — is expected to factor prominently in the Clinton campaign’s outreach to Latino voters.

Be afraid, little progressives—the GOP is coming to get you! It would be just another sales pitch if it wasn’t so effective, especially when it comes to topics like immigration reform.

Conservatives need to pay attention to this little dream team, because that’s exactly what the Castro brothers are—a team. They work well together, play off one another, and serve as a double megaphone for the most radical policies the far left has to offer. A ticket featuring one Castro brother, and backed by another, could prove a formidable foe for even a united GOP.

“If this is how they’re talking before the election, can you imagine what happens if one of those guys is sitting in the Oval Office, issuing executive orders?” he later said.

By which he meant, “Withdrawing executive orders and enforcing the law.”

So THAT isn’t exactly an unbeatable message. If that’s his best shot, he’s a pop-gun.

They’re a perfect fit for the Dims: stupid, corrupt, without any record of accomplishment, but most importantly . . . hispanic!

The Dim’s wouldn’t really run someone whose sum total of experience is as ceremonial ‘mayor’ and then an assignment to an agency he was under investigation for defrauding as mayor would they? Somebody who literally grew up on the knees of America-hating socialist agitators? Oh wait…..

Castro’s speech at the last convention generated the same cloying ache of PC inevitability, bias, entitlement, and ‘social justice’ as the keynote address in 2004 by none other than The Anointed One.

“Julian stole the show at the last Democratic Convention”

Just like Obama did at the 2004 convention, and look what happened.

“Castro lives to antagonize Republicans—and (based on my experience) manages to do so while still maintaining an aura of likeableness and approachability that could prove tricky for conservatives aiming to counter his message.”

Only because most of the R’s are such pussies and PC. Put a plain speaking, non teleprompter R in front and they will put these guys where they belong, the dustbin of history.

No doubt, these punks should be blasted for their lack of experience, their trail of corruption with what little experience they do have, and most importantly the name “Castro” and the perceived connection to Marxism should be hung around their necks.

Progs want to talk about “racism”, these guys grew up with a momma preaching about “The Race.” It just doesn’t get any more racist than that. There should be adds linking La Raza to the KKK… it’s the exact same damn thing… no actually worse because some corners of La Raza openly call for Reconquista which is a take-over of certain US States. Hmmmm…. wouldn’t that be considered Treason?

The Dims have come out of the closet with their Marxist tendencies and they should have their metaphoric skulls bashed in with it. As you say, they need to be relegated to the dustbin of history with all the other failed ideas.

Are Races for Political office now to be based on Gender & Race ? These newer up and comers, are typical ” Life time Political Hacks, That hold many offices and accomplish Nothing. ( Sometimes they get caught stealing. ) More Demos. with no real history. Where have we heard that before ? ( Are you listening Hill & Barak ? )

The best thing Obama did for San Antonio was appointing Castro as HUD Secretary. When Castro was mayor he was pushing a street rail system akin to the one they have in Houston.

When he left a referendum was started to stop the rail system and garnered the required signatures but was disqualified due to “improper” acquiring of signatures. Fortunately the new mayor Ivy Taylor stepped in and said the people should have a voice in deciding if the rail system should proceed. It died quickly and quietly.

One could hope Julian will self destruct just like another former mayor and HUD Secretary Henry Cisneros.

The Castro Bros are also close friends of the Soros funded Tribune’s owner. The Trib has set up partnerships with smaller papers around Texas to provide articles and content which make it appear that their candidates of choice have lots of grass roots support. (See the entire Wendy Davis campaign) These guys understand the false popularity narrative and have their operatives in place.

Not to mention that the Dems “owe” them after the Wendy Davis debacle after they had promised the Castros that they would be sitting in the Texas Governor’s office this fall.

Then there is the La Raza crap – which gets ugly and nasty and needs to be exposed and tied around their necks long before they get their hat in the ring.