“I’ve been as transparent as I could” 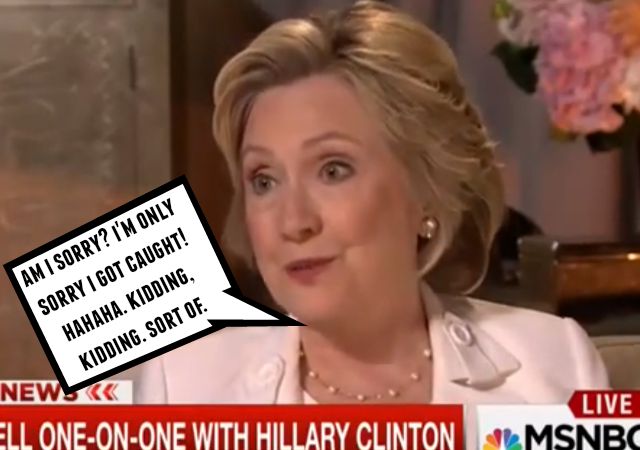 “You said recently that using your personal email as Secretary of State was not the best choice and that you take responsibility,” Mitchell began. “Are you sorry?”

Clinton didn’t address the “are you sorry?” question there, but she did proceed to embark on an almost hilariously fictitious recounting of the events that have transpired in the months since the public became aware she was using a personal email account and home brew server.

Starting with the fact that my personal email use was fully above board, it was allowed by the State Department as they have confirmed, but in retrospect, it certainly would have been better. I take responsibility, I should’ve had two accounts — one for personal and one for work related and I’ve been as transparent as I could asking that all 55,000 pages be released to the public, turning over my server, looking for opportunities to testify before Congress. I’ve offered for a year, finally the committee will give me an opportunity to testify in public toward the end of October.

I’m going to answer these questions and I’m also going to continue to talk about what’s important to the people I meet about this presidential campaign because it really is critical that we renew the basic bargain of America, that if you work hard, you do your part, you get ahead and pay for college, and have equal pay for equal work, all the other issues that are important in people’s minds.

“Turning over my server, looking for opportunities to testify before Congress…”

A quick fact check says, stop, drop, and roll because your britches are on fire and your about to burn the whole place down.

Clinton turned over her sever because the FBI demanded it after her refusal to do so for months, further, it took all kinds of haggling between Hillary’s counsel and House Select Committee on Benghazi before Clinton would agree to testify before Congress at all. Committee Chair Gowdy requested two hearings, that was nixed as Clinton would only agree to one.

Again Mitchell asks Clinton if she’s sorry and if she would like to apologize to the American people for the choice you made.

“Well it wasn’t the best choice. I certainly have said that, I will continue to say that as I’ve also said many times, it was allowed, it was fully above board, the people in the government knew that I was using a personal account but it would’ve been better if I had had two separate accounts to begin with,” said Clinton.

Forget about her presidential campaign, Clinton must account for how she handled national security information while serving as Secretary of State. That she’s now running for president doesn’t exempt her from answering questions about her mishandling of the State Department for four years.

Wow. A new “Pretty In Pink” effort from the Queen of Mean Girls…!!!

No. Body. Believes this.

Compared to what Richard Nixon did, and for which Hillary gleefully worked for, she should be in her orange pantsuit doing hard time.

2) The Republican party helped push Nixon out the door because it was the right thing to do for the country. He had sullied the office. Today, the Democratic party would rally behind “their guy/gal” even if he/she were caught raping a small girl and murdering a small boy on the DC Mall. They simply have no ethical boundaries; it’s all about power to them. The ends justify the means. Grow the Federal Leviathan at all costs. FORWARD!!!

If you watch the entire interview you will hear her apologize at the end. This email scandal is a joke now…

Speaking of jokes, I hope that your comment is a joke. Because what’s wrong with leadership that flouts national security policy in order to squash governmental transparency, right?

Too many national secrets given away to terrorists for this to be a joke in any way……….

She is Such A Sweetie Pie! I LOVE a good laugh for my Friday! Thank you for sharing this! (And this must be BEST the Democrats have to offer.)

“I’ve been as transparent as I could”

Which came first? Obama or Hillary or lies?

The lies. She has been a vile, lying scumbag since LONG before anybody on this blog had ever heard of Obama. Long before.

She must know by now that the nomination is slipping away. Becoming President has been her whole life. Eight years ago she had it in the bag and then that unknown whatever from Chicago came along and destroyed her dream. Now, her last chance, is slipping away too.

I wonder if she will have a complete mental breakdown when it becomes clear that she is not going to make it. I also wonder what kind of damage she can still do to this country that has rejected her and destroyed her dream. She will never acknowledge that it is HER fault that she loses the nomination, she will blame everyone else and, as a hate filled bitter person she is going to strike out at everyone and everything.

If you think you have seen Ugly Hillary before, just wait.

Hillary’s type don’t have break downs. She will most likely focus on some new “victims” in the country.

I dunno. She’s been acting very loopy lately. Something’s off with psychologically.

Isn’t the State Department the responsibility of the Executive?

Not A Member of Any Organized Political in reply to oldschooltwentysix. | September 4, 2015 at 2:25 pm

Hillary and all the Dem candidates should be asked non-stop about this.

… critical that we renew the basic bargain of America, that if you work hard, you do your part, you get ahead and pay for college …

Huh? She is still running as a Democrat, right?

Oh well! Back to being dead broke again.

Totally scripted interview, some of those longer questions shes nodding and showing no thought process going into what is being said, she already knows whats coming.

“I’ve been as transparent as I could.” This may be accidentally true. She is incapable of being transparent or honest.