Liberals just won’t take no for an answer. 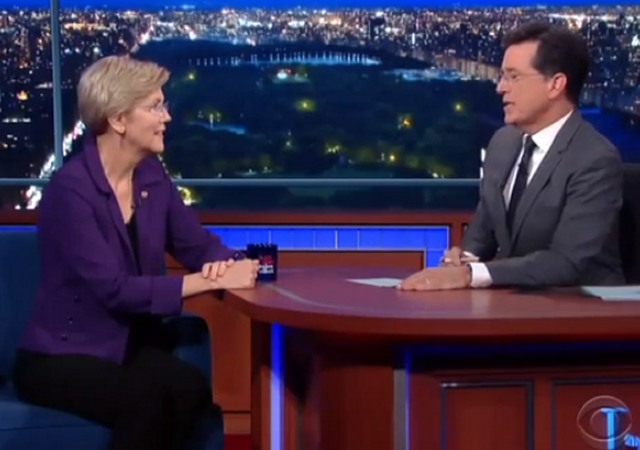 Despite pleas from numerous high level progressives over the last few years, Massachusetts senator Elizabeth Warren is still insisting that she will not run for president in 2016.

In an appearance on the Late Show this week, Stephen Colbert gave Warren celebrity treatment and asked her the question one more time.

Curtis Houck of NewsBusters has the story:

Stephen Colbert Cozies Up to Elizabeth Warren, Pleads with Her to Run for President

Near the tail end of his opening monologue, Colbert hyped that Warren “has launched a one-woman crusade against the billionaire class” and is “like Batman, but her enemy is Bruce Wayne.”

Later in the September 24 program, Colbert introduced her as “the sheriff on Wall Street” and admitted to her that “you’ve come a long way, baby, if I may coin a corporate phrase.” Reminiscing about the first time he met her, Colbert hyped that she serves as “one of the household names in American politics and yet you are one of the few household names that is not running for president of the United States.”

He then pleaded: “Are you sure you’re not running for the president of the United States?

Warren responded by saying that she’s fighting in the senate then fell back on her usual rhetoric about the game in America being rigged. I guess it would be too much trouble to ask her who’s been in charge for the last seven years.

No matter how many times she claims she’s not running, liberals won’t take no for an answer.

Take, for example, James Pindell of the Boston Globe:

This is Elizabeth Warren’s moment (for real this time)

Politically speaking, the perfect candidate is US Senator Elizabeth Warren (who appears tonight on the new Late Show with Stephen Colbert). As my Globe colleague Annie Linksey quoted a New Hampshire activist last week, Clinton “just doesn’t have the spark.” Yet, there are many women who want to see a woman in the White House.

Warren is the candidate who can cut into Clinton’s demographic base, Sanders’s enthusiasm, and the Biden argument that the race needs a more established alternative (and without all of his political baggage). And unlike when people looked at Warren as an alternative to Clinton, she could come in today as a the party’s savior. By November, Clinton may have fully stabilized as the frontrunner, especially if Biden doesn’t run.

Warren has, of course, said she will not run for president in 2016. So the ‘Draft Warren’ signs have been put away, and the ‘Draft Biden’ signs are being distributed. But now, more than ever, this is Warren’s moment.

For everything you need to know about Warren, be sure to visit ElizabethWarrenWiki.org.