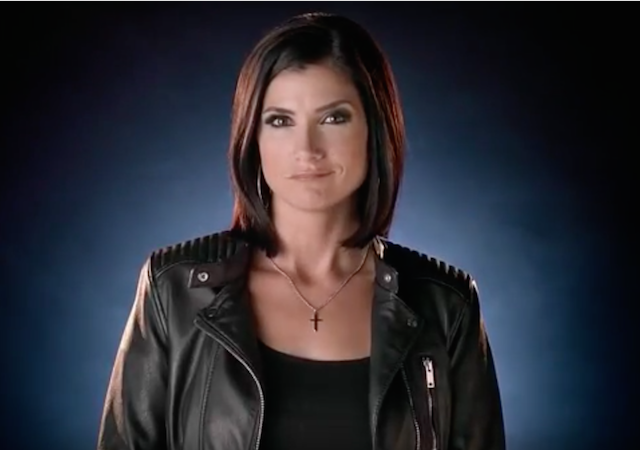 Earlier this month, Dana Loesch appeared in an NRA promo video asking women to take a second look at safe, legal handgun ownership as an effective form of self defense.

It was awesome. Watch it if you haven’t already:

This video is the definition of speaking truth to power, and highlights an important difference between the conservative, pro-gun narrative, and what the left twists that narrative into. Anti-gun advocates feed off of the fear, sadness, and confusion that hits in the wake of mass or high profile shootings; they don’t want you to know about the lives saved by guns—all they want is to convince Americans that their families would somehow be safer if only criminals had access to guns in a gun-free society.

Loesch’s ad made a splash, so of course, liberals predictably flocked to discredit it—but some went too far.

A graphic artist named Tom Adelsbach altered footage pulled from the video to make it look as though Loesch ends the message by putting a gun to her head and pulling the trigger.

Adelsbach eventually deleted this purported work of “satire,” and it has since been removed from his accounts, but the damage was done. This was a threat, and the Loeschs were taking it seriously:

Yes I am going to reach out to the FBI and cyber crimes. I take death threats seriously, especially when they make videos about my murder.

I’ve contacted the FBI. I will keep you updated. I am going to pursue this to the fullest extent.

If you think it's "satire" to make a video shooting a mom in the face that you've harassed for eons, you need to learn word definitions.

Instead of hiding under a desk somewhere, Loesch stepped up and encouraged her followers to speak out in support of gun rights:

The response was overwhelming. Supporters flocked to the NRA’s donation and membership pages and pledged their support…in the name of the trolls threatening Dana:

@DLoesch Does joining count? If so, you're looking at the newest card carrying member of the #NRA. pic.twitter.com/VDftLKUruX

@DLoesch All paid-up. I'll donate, too because: "If we lose freedom here, there is no place to escape to". ~ Reagan pic.twitter.com/VwzOTFla6S

As a conservative blogger, I am appalled, but not shocked, at the video and hate tweets thrown Dana’s way. This is nothing new. This woman—and many others—has been fielding threats like this for years, and the media largely ignores that this proves a greater point when it comes to self-defense and responsible gun ownership.

As an attorney, I look forward to seeing these people frog-marched into a courtroom.

As a woman, I am so, so proud of you, Dana Loesch. Your bravery and your tenacity represents everything that makes America strong. Keep fighting—we’re right behind you.

If a State begins to arrest people for failed attempts to comply with regulations, it will encourage others to simply evade the regulations for fear of being charged for incompetent, incomplete, inadequate, or otherwise faulty attempts at compliance. This is completely counter-productive, unless the objective is simply to discourage firearms ownership, by giving the impression that the laws are so complex that legal ownership of firearms and compliance with regulations is virtually impossible, while the state insists that the right to arms has not been infringed, because legal ownership is still nominally possible.

The fear mongering Left will assault the characters of REAL women with spiteful satire while false flag “fenoms” make “glowing” appearances in Season Six of “The Good Wife” (Valerie Jarrett and Gloria Steinem).

I’ve got your back, Dana!

In other, sort of related news, the American Bar Association wants “Stand your ground” laws repealed.

I’m hoping to see Mr. Branca eviscerate that latest report of theirs. Not because it’s especially necessary — they’re not going to get anywhere with that proposal anyway. But just because it’d be fun to watch.

I thought the Tea Party were the violent ones.

What Dana is doing is great and necessary. But what we need more than anything is for one our candidates to open up a discussion about the Left — what and who it is, what it does and why we need to know. Consider how the Left has promulgated narratives about conservatives and right-wingers as hateful, racists and veritably subhuman. This surpassing narrative has reached into every corner of the culture. The Right on the other hand can barely even mention the word “Leftist.” A few of the candidates nibble at the edges (Carson on political correctness, Cruz more than the others on the corrupt system and the democrat party, and he has mentioned the Left but only in an issue-based way). But no one has started or sustained a conversation about the Left either through a series of speeches or media interviews or during the debates. What greater issue is there, really? The Left is behind every social degradation and most every policy disaster in our country. It’s almost as if the Left has cast a cultural spell and have become “that which shall not be named.”

The problem with your idea is that unless a candidate does it in response to a direct provocation it tends to come across as whining to a large number of unaffiliated voters, who really aren’t all that interested in ideological discussions. Plus if done in a ham handed manner, it feeds the trolls.

Since a lot of this is more cultural than campaign related, the place to address it is via the culture, not the campaign trail. For example, I will go to the website of any company that uses a “men are stupid” ad campaign theme and tell them that I am a woman and I find their ads insulting.

Perhaps the best way to educate people about this is with humor. Several conservatives do just that with comic videos they post on-line. A conservative comedy cable TV show would be even better.

It is said the Devil’s greatest triumph was convincing people he didn’t exist. The studied avoidance of the subject of Leftism remains one of the Left’s greatest and most sustained triumphs. It has consigned generations to ignorance and delusion. We can’t afford the public ignorance anymore. Yes, politics is downstream of culture. But the cautions you raise about engaging the people on this subject in a political context not only are mostly phantoms in my view, but furthermore negated by the sheer urgency of the moment. A politician, to be a true leader (including a leader of the culture, which is how the Left views its leaders) simply must engage the public in a discussion of the forces at play in the culture and politics. Moreover, there are infinite, immediate opportunities to raise the subject — through every issue a politician must deal with and which affect Americans. Obamacare, global warming, Planned Parenthood, minimum wage, illegal immigration, Social justice eruptions — each is in a very direct way about Leftism and has roots in Leftism. Each is a perfect opening to a discussion — and a solution. To not discuss this is actual negligence, a failure of responsibility. A kid today can go through 12 years of schooling and four years of college without a single course on the history and failings of Marxism in all its forms and appearances (including through the Cold War, one of America’s greatest struggles) but get treated to numberless courses about the depredations of America including hegemony, capitalism, colonialism, sexism, etc. The average college kid is fluent in the extravagant wrongness of the American system of governance but completely ignorant on the nature of those who taught him this and the motives behind their propaganda and pedagogy.

Leftist politicians talk endlessly about the “right wingers.” We need to do the same to them. It’s not whining, its necessary knowledge and truth.

Maybe we’ll get a video that ends with Tom Adelsbach getting sodomized by Bubba, after his classless antics result in his arrest.

Wishing a violent sexual assault on your political enemies is really pretty horrible no matter who’s doing the wishing.

Yes! So agree. We are better than that. We fight with our brains and hard work, not useless, tasteless, rhetoric. That’s so kindergarten, Dag.

She has our permission to use Hillary Clinton as a shield.

Amy, JoAnne, Wukong why not a little more worry about the vile
video. There is nothing political about it! It’s a all out THREAT and all you guys can do is moan and grown about a comment here. Yikes! What is up with that?
The video was insane, cold and very calculated!! Apparently this guy has been harassing Dana for sometime. Can not wait to read the article about the FBI speaking to him.

What a loser this Tom Adelsbach is. And it just demonstrates his priorities are backwards. He’s a entrepreneurial visual artist; does it make good business sense to drive away half of the potential clients he could do business with? No. But he’s determined to find out the hard way.

Adelsbach has done far more damage to himself and his causes than FBI investigation or possible prosecution will ever do. He is quite brave at a safe digital distance. I would love to see him try that in person. Well, no I wouldn’t, but you know what I mean.

Haven’t really looked at her message and ad yet. Still staring at her. She’s hot.