Time for Republicans to attack 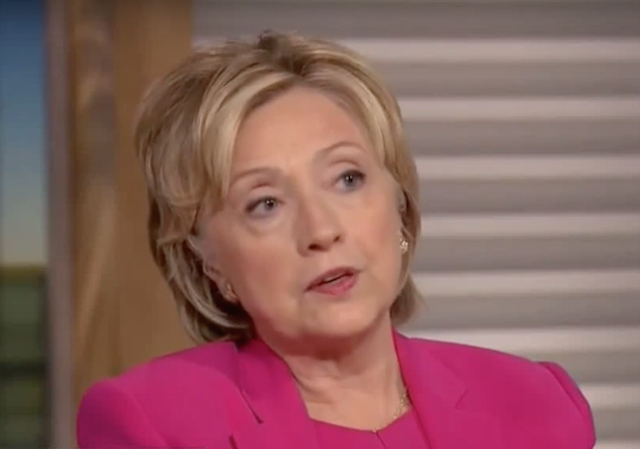 The Democratic primary is a strange animal. Hillary Clinton is the obvious and expected front runner, but she’s got a mad socialist chomping at her heels in key primary states; meanwhile, a respected former governor is waging an all-out war against the party apparatus over the party’s apparent protectionist attitude towards Clinton—and actually getting headlines and activists behind his efforts.

Wasn’t this supposed to be Hillary’s year? Isn’t it her turn? You’d think she’d be more prepared for it.

Last night NBC aired the second half of a “meet the candidates”-style conversation between Hillary Clinton and Chuck Todd. When Todd asked Clinton to differentiate herself from President Barack Obama, she demurred, arguing that she wasn’t running for Obama’s third term; when he pressed the issue, she completely and utterly failed to provide a single distinguishing trait of herself, her campaign, or her plans for the presidency.

Clinton dug in her heels and evaded the question with her best effort. She noted, “I would have a different job.” She then gave the President copious accolades about him inheriting a fragile economic framework and how he needed to dig us out of a ditch (“which he has done”). When it seemed like Clinton had sufficiently wiped the surface clean of that question (presumably, with a cloth), Todd pushed back.

“But where do you differ with the President?”

For those of you keeping score at home, this is not an answer to the question, “But where do you differ from the President?”. To make matters worse, Clinton then offered up another popular critique of hers, which is that she would serve the “third term” of husband Bill Clinton. Her response? To highlight that the (hypothetical) circumstances she would inherit in January 2020 would be so drastically different from Obama and her husband that there’s just no way to know.

Either Clinton can’t find any fundamental differences between herself and President Obama, or she simply is refusing to say so out of fear of offending a valuable chunk of her voter base.

Whichever theory you go with, this still should have been an easy get for Clinton. Questions like these are low-hanging fruit; all it takes is a cursory glance at polling data to figure out what Americans don’t like about what the Administration is doing. With a simple twist, Clinton should have been able to point out policy areas that Americans are displeased with, then pivot toward her own (if budding) policy proposals.

Throwing a member of your own party under the bus is an art form, and Hillary is still drawing stick figures.

This interview serves up a golden opportunity for Republican candidates to hit back against Clinton, Obama’s failures, and progressivism at large. Obama ran on a platform of “hope and change”; Clinton, in turn, is running on a platform of no hope for change—which is a devastating realization for people who have seen their lifestyles and businesses take a hit as a result of Obama’s disastrous policies.

If this is the best the Democrats can do, you owe it to yourself, voter, to try something different!

Take it. Run with it. It’ll be worth it.

No. I actively do not listen to anything this or any other Leftist “says”. It is all lies! Why bother? It is ear pollution.

And yet, when I know they are in a position to be influenced, I advise my kids to listen very carefully to what that person says. The upcoming election is going to be the outcome of a long conversation amongst Americans who differ as to what the facts are, and what the solutions to some very hairy problems are. Listening closely is a powerful technique for detecting unshared assumptions, errors, lies, and surprising areas of agreement.

When you stop listening, you lose your ability to persuade.

“It won’t surprise you to learn that I think the economy does better under a Democtratic president, so…”

There she agrees with T-rump. Well, the T-rump of a little bit ago. Who’s TOTS different now. But Rubio isn’t. So there! Because…consistent!

You have to feel bad for Chuck Todd. He tried to take a dive, to make it easy for her – did all he could do without getting his knees dirty. Those weren’t gotcha questions, they were softballs a good candidate could know out of the park with their vision, perspective, blah, blah, blah.

Many a ballplayer has failed to make the majors because he has trouble with the curve. Hillary whiffs batting practice.

“KNOCKS” out of the park, of course

There is one – the preview button.

What does it tell us about obama that Hillary did point out that she has a vajajay?

She claims she has a vajajay, but an actual vajajay is not in evidence. Come back when you have the evidence in hand.

Also, by asserting she has a vajajay, Hillary implies that Obama does not, another dubious claim not in evidence.

I had thought Huma had said that Hillary has a vajajay, which is why I took Hillary’s silence to make the inference about obama. But you are right: While it appears obama and Hillary have the same equipment, we don’t really know what that equipment is.

There you go and here we are.

And there the rest of us went… to go puke. Please refrain from discussing that stuff… the smell could gag a maggot from here.

Come back when you have the evidence in hand.

I for one will take her word for it. No curiosity whatever. YMMV.

Has there ever been even a momentary flash of brilliance attributable to this woman? The more you experience her the less there is to like. I just see evil genius minus the genius.

Well, there WAS the PUTATIVE muzzle-flash at Ft. Marcy Park…

but, hey, there are no living witnesses…

Well there was one momentary flash when she considered buying a blue dress from GAP. “That,” she said, “will get Bill in bed with me.” But, as I said, the flash was momentary and she quickly changed her mind and decided to buy a pantsuit instead. To make a long story short, she hasn’t shared beds will Bill since. But to be honest, Bill is just not a pantsuit kind of guy.

They shared the proceeds from The Lincoln Bedroom… does that count?

I suppose it does.

Remember in 2008 when Obama ran against Bush? This is what I’d be doing and would have been doing for the last four years. If I’m a Republican Candidate my talking points wherever I go would be that Clinton/Obama ruined this, that, and the other. Clinton/Obama ruined the Middle East, Foreign Policy is a mess because of Clinton/Obama, The economy is a disaster because of Clinton/Obama, four Americans were killed in Benghazi because of Clinton/Obama and on and on.
This type of thing continually put McCain on the defense and kept him there. This would keep Clinton continually trying to defend these policies unless she just came clean and threw Obama under the bus but even then. No one is doing this.
Jeb Bush talked in polite terms about how bad the economy is but never ever once mentioned or tied it to Clinton/Obama as if it was just some sort of cycle thing.
But no one ever listens to me.

I think the R candidates are just keeping their powder dry at this point. The old hag is already on the defensive, from Gowdy and various FOIA requests, and also from her own insipid, stupid mouth.

If and when she stops being on the defensive from those things, one can only assume they will open up with all barrels blazing.

Watching her twist and choke out slowly is certainly more entertaining. Is there any butter for this popcorn?

Chuck Todd should have asked Hillary about the number of times Joe Biden promised a “Recovery Summer”, but none of them have panned out. She’d have been torn between attacking her rival and defending the failed administration she was a part of. But Todd is palace guard, he’s not gonna ask the tough questions of a Democrat, save those for the Republicans.

Face it: if her husband were anyone else, she would have been tossed out by prospective donors and laughed off the stage by the Democratic Party. He is her only “qualification” – and virtually every bit of the economic success he claims was forced upon him by Kasich, Armey, Gingrich and DeLay. He was dragged into welfare reform, capital gains tax cuts, and a balanced budget kicking and screaming – and has been taking credit for it all ever since.

Hillary’s political relevance is welded to Bill’s relevance, and as time goes by both are seeing their relevance diminish. Thank God.

Whichever theory you go with, this still should have been an easy get for Clinton.

It wasn’t even a softball question. It was a beach ball question … and she still somehow managed to whiff it.

What a dumbass. Dumber than she is corrupt.

At least she is transparent in her dumbitude.