Just another indication Hillary is sliding, and will require a southern strategy.

The polling news just keeps getting worse for Hillary Clinton, particularly in Iowa and New Hampshire.

Just as commentators far and wide were suggesting it’s time for panic in Clinton World, this was released this morning: 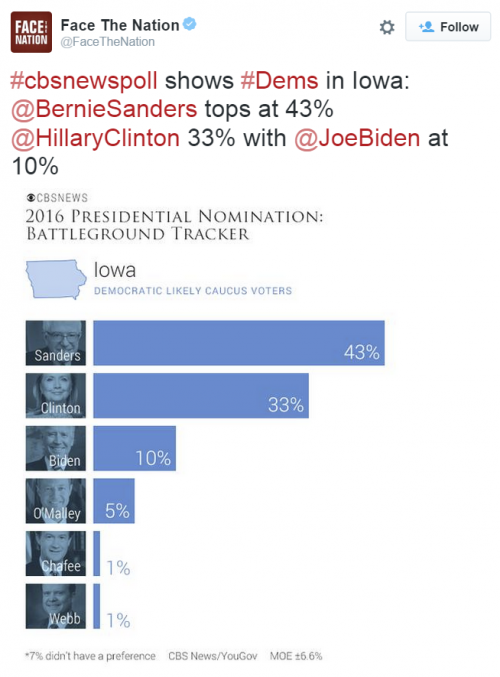 As if that’s not bad enough, this: 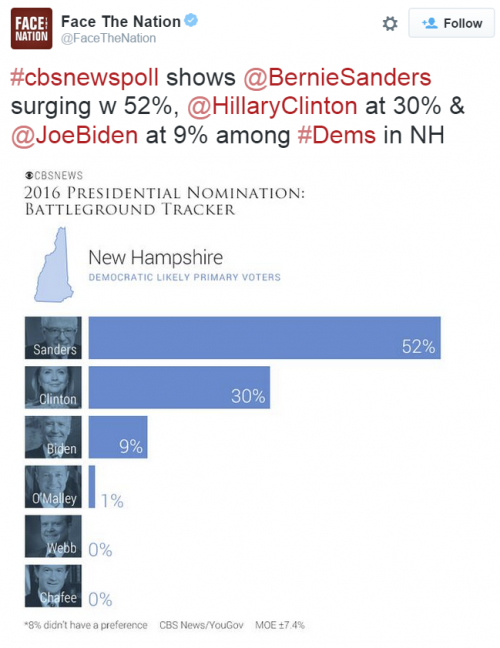 Yes, both polls have large margins of error, but the margins Bernie has over Hillary are even larger.

Hillary is doing better in South Carolina, another indication that Hillary will need a southern strategy to win. But that may not be enough. Momentum gained in early states can build on itself.

Poor old buzzard is cooked. Don’t put a fork in her. Just throw her out for the yard dogs.

Bernie would be worse than Hillary, as President. Dunno if he can get traction enough to be the candidate.

Ideologically, you could be right. But I consider him nowhere near as criminal and corrupt as Hitlary. That has to count for something.

To be sure socialism is “criminal and corrupt.” Socialism would destroy America. Hasn’t any Bernie voter learned from history? Oh, I forgot…

Millennials have not learned from history because history is being taught, not with a commendation of past good and the millennia of tradition but rather with a myopic hindsight on history’s social “indiscretions.”

This way of teaching history is being done to refocus Millennials attention on the future’s social change à la Gnome Chomsky and Coward Zinn, two men who have both enjoyed priviledge in America, and “Lean forward” Progressivism.

Factual History has been replaced with emo: “How do you feel about that” therapy-like ideology. And, that is one reason why we are still dealing with the thin-skinned “BlackLivesMatter movement and with none of the facts that blacks are no longer slaves but are free men who are responsible for their own actions.

Bernie would also be much more readily impeachable, whereas we’ve seen how difficult that is with an “minority” POTUS.

‘Republican leadership’ is an oxymoron.

Just another indication Hillary is sliding…

She’s sagging, too. But, she’s a granny.

…and will require a southern strategy.

She’s been working on her fake southern accent for years.

“She’s been working on her fake southern accent for years.”

No one actually from the South is fooled.

These polls really point to imminent havoc in the democrat race. Sanders is not a credible national candidate, and Hillary will not go gently. I don’t think the division and chaos will be among the republicans at all, but rather see a brokered convention for the democrats. Their party is descending toward an Occupy Wall Street management model — how else could it end?

What exactly does Hillary do to recapture momentum if she had any? Can’t go to the left of Bernie, because that would seem fake. If she stays where she is at politically that is not helping her. She may actually not make it to be the nominee. Now, let’s see if the Republicans will get rid of JEB!

I’ll stand by my prediction that Hillary! will win both the Democrat nomination and the Presidency in 2016. Never forget that Hillary! is a female version of Obama: a mediocre intellect powered by rage, resentment and entitlement. The sort of candidate Democrats naturally flock to, in other words.

Never underestimate the power of the gender card, particularly in the Democrat primary. Sanders, Biden and the rest of the Democrat candidates are white males, which according to the Democrat Party makes them Hitler reincarnated. And once she clinches the nomination the media will drop its tepid criticism of Hillary! and gush 24/7 over the chance to make history by electing the first female President.

However, I think we would be crazy to underestimate Hillary and sit back and joke about her. If nominated, she will get millions of votes because she is a democrat and millions more because she is allegedly female.

If we haven’t learned from Obama’s election and re-election, maybe we need to learn to start saying President Clinton all over again.

She’s losing women everywhere, including all of my women Dem Baby Boomer friends, who refuse to vote for her. She doesn’t have the coalition that Obama had to pull this off, and it’s only going to get worse for her. Much worse.

“If we haven’t learned…”

These are republicans we’re talking about. The problem has never been hillbilly or even Obama, it is the R party nominating people just barely to their right.

In this election, the fix was in for Jeb!. And no, they haven’t learned, nor do they intend to. They would rather have Hillary than Cruz (or walker/trump/etc.) trump just came along and wrecked their plan.

The “I’ve-Been-Burned-Before” cynic in the back of my head is screaming that this is just the setup for a “comeback kid” narrative to arrive just in time for Christmas.

Southern strategy = Antartica. That may be the only place where millions don’t hate her.

Even the penguins hate the hillbilly…