Draft Biden official overheard on train, but could just be punking other passengers.

National Review reports on a cell phone conversation overheard on an Amtrak train indicating that the 2016 election may be heading in an entirely new direction for the Democrats:

When Josh Alcorn joined the Draft Biden super PAC, MSNBC headlined its story on the move “Draft Biden just got real.” Alcorn had been finance director and senior adviser to the late Beau Biden, the vice president’s son, and had worked as finance director for Harry Reid as well. Judging from phone conversations Alcorn had on an Amtrak train from New York to Wilmington yesterday, the Biden campaign is about to get still more real.

Another passenger said that Alcorn was being loud enough in the café car to make it hard to work. He said that Alcorn had said on one call, “I am 100 percent that Joe is in.” He was less certain of when Biden would announce, but guessed it would be in mid-October. Alcorn’s own plans to travel to California in early October would have to be canceled if Biden announced earlier.

Could be real, or maybe the Draft Biden guy just wanted to create a buzz by making sure other passengers overheard the conversation.

The Wall Street Journal tends to confirm the trajectory of the Biden campaign as well:

Vice President Joe Biden’s aides in recent days called Democratic donors and supporters to suggest he is more likely than not to enter the 2016 race, and their discussions have shifted toward the timing of an announcement, said people familiar with the matter.

While the Biden team is still debating the best time to jump in, the vice president met Monday with his political advisers and talked about the merits of an early entry that would assure him a place in the Democratic debate scheduled for Oct. 13. They also are honing his campaign message and moving ahead with plans to raise money and hire staff, the people said.

Democratic donors are clamoring for an option that is neither Clinton nor Bernie Sanders, the socialist entrant who is garnering significant grassroots attention. These donors just petitioned Biden, offering a slew of reasons seemingly devoid of logic and fact:

The letter, signed by nearly 50 people, calls the Obama-Biden administration a “spectacular success.” It cites job creation, a lower unemployment rate, new health insurance policies for nearly 9 million Americans and the end of wars in Iraq and Afghanistan.

“To finish the job, America needs a leader who is respected both home and abroad, and who understands the real challenges facing American families. In our opinion, the next president must be Joe Biden. If he announces he’s running, we’re all in. It’s a campaign we know he will win,” the letter says.

I imagine that the meetings look something like this: 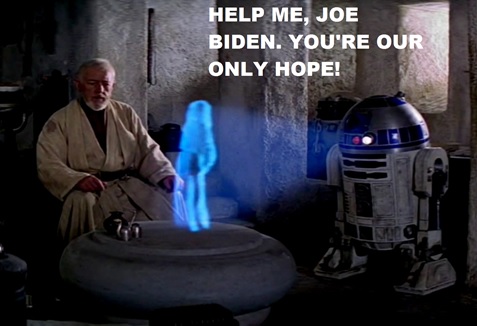 Actually, I shudder to think about Biden finishing the job on unemployment (with the real rate being closer to 16%) and the Middle East (especially as mass migration has meant that Europe has practically been annexed).

But then, progressives are notorious for saying anything to achieve their goals.

What is the likelihood that Biden will get in? In politi-speak, 100% usually means an even chance. However, it does appear that the Biden campaign train is picking up steam and Clinton is roped to the tracks.

Don’t be slow, Joe! Jump right on in!

The Deemocrats NEED a gropin’ old plagiarist to lead them!

Objective merit is meaningless in presidential politics. If it mattered, we would only know Obama as that junior Senator who never shows up.

Hillary is circling the drain. She can’t answer the email questions, despite months to practice, and we haven’t even got into the Benghazi details or the influence-peddling. For Democrats to nominate Sanders would be like the GOP nominating Buchanan: even the sensible parts of the base would desert.

Biden has no enemies in the party, including the Clintons, and he can keep Big Labor and blacks on board. At this point, they are more concerned about another wave swamping their down-ticket in the states than winning. And who knows? Republicans may nominate a real loser, and Joe might pull it out.

Considering that his most significant foreign policy experience is Ukraine, he’s so ready to be commander in chief.

Oh please, make it so. Anything but 14 months of Hillary.

Henry: I do believe that is the other argument Democrat donors are making. 😀

Heck, that is the secret battlecry of the supporters of all of the bottom tier of GOP candidates as well even though they are secretly hoping she IS the donkey nominee.

For the record, she is deliberately trying to get her poll numbers down so her financial backing dries up. That way, she can get out without looking like she had a choice. I think it’s called saving face but what’s to save? As Trump says, can you believe anybody would vote for THAT face?

I don’t think she’s given up yet, but the writing is on the wall. She will probably cite health concerns without being specific. But it will take the donors making one of those little group visits, like when Scott and Goldwater went to see Nixon.

Poor Debbie Wasserman will be black and blue by the end of this.

Joe Biden can distinguish himself from Hillary Clinton by citing one accomplishment that Hillary can not.

He can drive a car.

But Hillary’s better with a shotgun.