…and then it got awkward 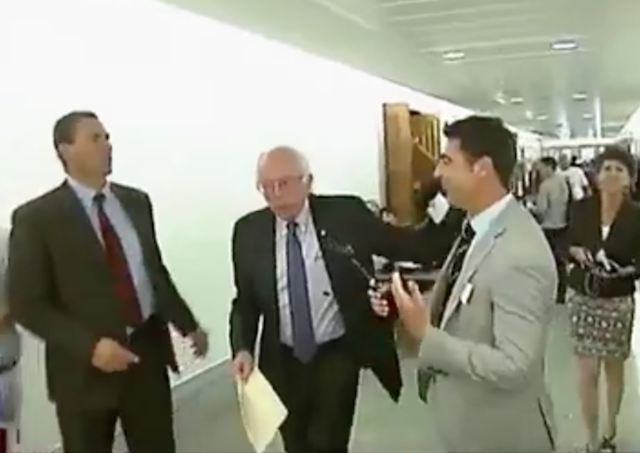 If you’re running for president, sooner or later you’re going to have to get used to the idea of the ambush interview—especially if you’re spending any time at all in either chamber of Congress.

At this point in the cycle, many candidates are jockeying for media attention wherever and whenever they can get it, even if it means dipping a toe into unfriendly waters. A hostile interview can be intimidating, but the payoff is worth the pain if you keep it together and “win the debate.”

Fox News pundit Bill O’Reilly is known for interviews that get a little hairy—which may be why Dem presidential candidate and US Senator Bernie Sanders has been avoiding invitations to come on the O’Reilly Factor like the plague. Bill finally got tired of being ignored, and sent ambush journalist Jesse Watters to track down the Senator for a pickup interview.

It didn’t go so well. Give it a watch:

Deliciously awkward! Mediaite breaks it down:

“I don’t do ambush interviews, so if you want to talk to us, there’s my press secretary,” Sanders told Watters, who was following him down the hall.

“Well, I do do ambush interviews and I just had a question for you,” Watters replied, before he appeared to knock the senator with his microphone.

“Don’t push me!” Sanders said as Watters accused him of “getting rough.” Eventually, Sanders escaped onto an elevator before he had to deliver an answer to the question of whether he will “seize” O’Reilly’s house as president.

Now, if we could only get voters to pull a Watters, we might find out just what was hidden on Hillary Clinton’s email server…

Perfect example of why Fox news is considered a joke by real journalist.

Are you a journalist? I am. If you aren’t, don’t speak for me. Fox is not a joke.

Well if the job of a “real journalist” is to afflict the comfortable, then Jesse Watters certainly qualifies. The rest of the MSM, not so much.

yeah, right. 60 minutes became famous for ambush interviews, but I doubt you would have issues calling Mike Wallace a journalist.

oh, really? Which one?

I’d not grant an interview with O’Reilly either. He is rude, blustering, and never allows anyone to speak more than four or five words in reply before interrupting.

Um, Bernie Sanders has been a guest on the O’Reilly Factor MANY many times in the past.

Then, a) I stand corrected, and b) I still would not go on his show if invited to do so.

I can’t watch O’Reilly either, never could. What an ass.

Oh, boy. Our side can be jerks, too. I don’t know what I’m supposed to find laudable about this.

(And let me join in the chorus of O’Reilly criticism. I find it very uncomfortable and not at all entertaining to watch someone being rude. No, thanks.)

I don’t watch O’Reilly, the spin in the “no-spin zone” is just too cyclonic for me; but I do like Jesse Watters. Pity he hasn’t got his own show!