Senate Dems have votes to override veto, so announcement by top Dem on Foreign Relations Comm. not as meaningful 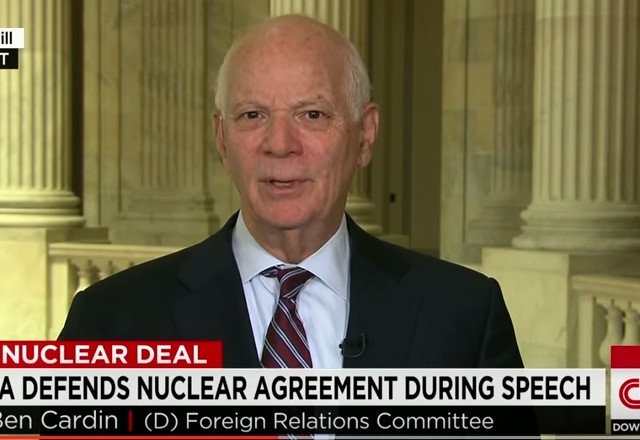 Sen. Ben Cardin (D – Md.) today announced his opposition to the nuclear deal with Iran (AKA Joint Comprehensive Plan of Action or JCPOA) in an op-ed published in The Washington Post. With Sen. Chuck Schumer (D – N.Y.) and Sen. Robert Menendez (D – N.J.) Cardin becomes the third Democrat to break ranks with President Barack Obama and oppose the deal.

But Democrats already have enough votes to override a veto.

Cardin’s main points of disagreement with the deal is that it would legitimize Iran’s nuclear program and boost its economy making the imposition of sanctions difficult if not impossible.

The JCPOA would provide this legal path to a country that remains a rogue state and has violated its international nonproliferation obligations for years. It would provide Iran with international endorsement of an industrial-scale nuclear program. Worse, Iran would be economically strengthened by frighteningly quick relief from sanctions and international economic engagement. If Iran violates the agreement, building international support for new sanctions would take too long to be effective. A military response in this scenario would be more likely, although disastrous.

The agreement talks about normalization of economic relations with Iran and states that the parties shall “implement this JCPOA in good faith . . . based on mutual respect.” But there cannot be respect for a country that actively foments regional instability, advocates for Israel’s destruction, kills the innocent and shouts “Death to America.”

I remain troubled that we agreed to a challenge period of up to 24 days for International Atomic Energy Agency (IAEA) inspections should Iran deny access to an undeclared, suspicious site. And I cannot support lifting the U.N. arms embargo and ballistic missile sanctions.

One thing you see in these objections is that the administration has made little effort to address legitimate concerns and instead dismiss anything that challenges its narrative. Cardin, had earlier praised the the deal for “retain[ing] the ability to snap back into place international sanctions in the event of a significant violation,” but his argument against means that he understands that practically speaking “snap back” is impossible.

Another point of Cardin’s that is fascinating is his discomfort with the inspections regime agreed to between Iran and the International Atomic Energy Agency (IAEA) to address possible military dimensions of Iran’s past nuclear work, writing that “[a]fter numerous hearings and briefings, I am still not confident that we will fully resolve outstanding concerns on this topic.” Last month Cardin told reporters after meeting with IAEA Director General Yukiya Amano, “Every time I get more information it raises other questions.” Despite the administration’s boasts that the IAEA believes that the inspections regime will be effective, Cardin, who knows the details of it remains unconvinced.

Also, contrary to administration boasts that these issues are not big deal, Cardin objected to the lifting arms embargoes on Iran and  24 day advanced notice for inspections of suspected nuclear sites.

Most importantly, Cardin pushed back against charges the killing the deal would hurt America’s diplomatic standing in the world or lead to war, writing that Europe is still going to follow the United States and that Iran desperately needs the sanctions relief that comes with the deal, so neither of them will walk away so quickly.

Cardin’s support for the deal comes the same week Maryland’s senior senator, retiring Sen. Barbara Mikulski (D – Md.) announced her support for the deal. Incredibly, Mikulski supported the deal despite admitting that sanctions snap back, the key enforcement mechanism in the deal, was “untested.”

Also earlier this week opponents of deal held a rally at Cardin’s synagogue in Baltimore County.

Rabbi Mitchell Wohlberg quipped that “Senator Cardin listens to me like the rest of my members listen to me.” Rabbi Wohlberg said that under normal circumstances he would thank everyone for coming. But “these are not normal circumstances,” and he pondered how it is possible that others who were able to come did not.

“Israel is now facing the greatest danger to its existence since 1948. How can we not raise our voices?” Rabbi Wohlberg compared our actions, or inactions, to those of Joseph’s brothers, who after throwing him into the pit, “sat down to eat their lunch” while their brother was pleading for mercy. He said our brothers and sisters in Israel have been thrown into a pit of despair and from across the Israeli political spectrum the vast majority are calling out for us to help. He attacked J Street’s efforts to ignore their cries for help. Of J Street, he said, “go ahead, call yourselves pro-peace, but don’t call yourselves pro-Israel.”

Rabbi Wohlberg expressed his appreciation that we have an organization like AIPAC that advocates for us. Although the president may have enough votes, we can send a powerful message if both houses of Congress and the American people vote down the deal. Let us proclaim to the world, “For the sake of Zion, I will not be silent, and for the sake of Jerusalem I will not rest, until her righteousness comes out like brilliance and her salvation burns like a torch.” (Isaiah 62)

NO. It is NOT too late to matter.

One, it can be declared a treaty by the Senate.

Two (at least), a CONSERVATIVE POTUS can totally reverse it, and signal to Iran that we will burn them down if they persist in acting like Islamist thugs, AND back that up;.

The only way the senate can “declare it a treaty” is to ratify it, which is precisely what we don’t want! The president would be glad to have this ratified as a treaty, but we wouldn’t! You’re simply not making sense.

As it is now, it’s not a treaty, and the next president can refuse to abide byu it. He can reimpose the USA sanctions, and he can even get the UN sanctions reimposed. But Russia and China won’t care, the EU will wring its hands and probably eventually not care, Iran won’t return its money to be refrozen, and in any case there won’t be a new president for 503 days 19 hours and 22 minutes, which is a lot of time for damage to be done.

This is in the same vein as Schumer’s no vote. They both knew it was not needed to stop the Republicans in the Senate but they get the “Credit” for standing up to obama for the Jews back home. It’s almost like they don’t know that we know about their Kabuki theater that they call the Senate.

Depends. If the GOP has enough sense, they can pass a joint resolution condemning the deal — so long as the Dems don’t get to 41 votes.

Schumer and Cardin and Menendez and so on matter for that count. IF the GOP leadership in Congress has the sense to do it.

Technically the president can veto a joint resolution. Not that he would bother, since it would have no effect anyway. So why bother passing one? 0bama already knows Congress and 2/3 of the people are against the deal, he just doesn’t care, and the law says he doesn’t have to.

What’s the most sickening thing about this treaty that is not called a treaty is the number of Jews who have supported Obama on it. To them, post-Holocaust, Jewish lives don’t matter. God will judge them harshly for that.

Actually surprisingly few Jews have supported him on it. Even in J Street, which you would expect to be solidly behind him, he’s in trouble.

Milhouse – of Jewish organizations, only J-Street supports the deal. Not a single federation did. (25 opposed, others didn’t commit.) I agree, Jewish unity on this has been nothing short of remarkable, except to those who wish to overemphasize the likes of J-Street as being part of the Jewish community.

The turds like wasserman should be formally ex-communicated from the Jewish faith. Thanks to this deal, billions more will be devoted to harming Israel. And the US. Not to mention a completely unrestricted nuclear program. Even Saddam didn’t thumb his nose with such arrogance and stand so obstinate when it came to inspection issues.

Wasserman – one of a group of Jewish people beholden to the Democratic party, and a so-called Jewish mother, selling out Israel and the US and Jewish people everywhere.

Wasserman and her gang have chosen party affiliation over her people and her country, and have chosen to side with Iran, a nation that has repeatedly sworn to destroy Israel and the Jewish people.

This is the work of satan.

Judaism doesn’t really have such a thing as excommunication, in the sense that the Roman church has. These people have no connection to Jewish faith anyway; they’re Jews by nationality, but they’re not at all religious.