Bobby Jindal Does Push-Ups, Goofs Off with Buzzfeed

Bobby Jindal Does Push-Ups, Goofs Off with Buzzfeed

Are they laughing with him, or at him? 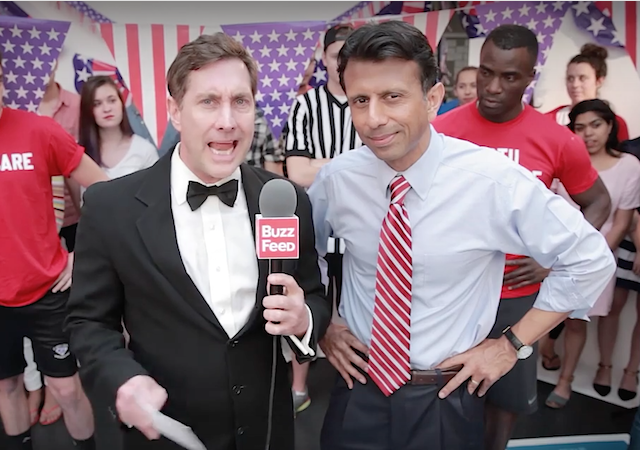 Remember Bobby Jindal? He may have not made it into tonight’s Fox News debate as a top-tier candidate, but he hasn’t gone anywhere. In fact, he’s become the next in a line of Republican candidates who have taken to more liberal outlets for a shot at becoming the next political viral sensation.

This time, we find our candidate wading into the progressive playground that is Buzzfeed for a political push-up challenge. In a heated contest, he takes on his top political foes: taxes, Obamacare, hyphenated-Americans, and his notorious State of the Union response speech.

It’s a little hard to explain without a dry fit tee and yoga mat. Just watch:

Everybody sweaty and amped for President Jindal? I have to say, this may be the goofiest of all the “viral” spots to hit thusfar, but I admire his guts. It takes a brave man to run satire on his own presidential campaign.

Jindal launched his campaign later than many of his cohorts, and I’ve always thought there was something different about the way he was doing things. His “announcement video” amounted to footage from a GoPro camera they stuck in a tree—sharp contrast with the slick, professional videos other candidates had to offer. I like Jindal’s quiet wonkishness, though; it’s probably what makes this video so patently ridiculous that it might work.

I have my doubts about how effective Jindal’s outreach to the liberal media and its audience will be; he has already been made the victim of rude and boldly racist remarks from guests on cable news shows—and no one took a stand against it save for conservatives.

When these same liberal media outlets turn on him –and they will– it’s not going to be pretty.

Still, Jindal’s easygoing nature works well with the more “human” outreach efforts Republican candidates have been testing out, and I’m ready to see a lot more of that from the Louisiana governor.

This is very funny. Jindal is a good sport. I predict that he and Carly will do well tonight