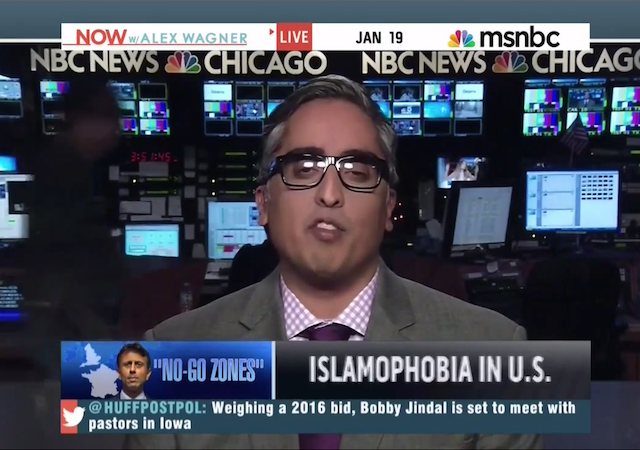 Lean forward for a second.

I’m not going to come right out and say that MSNBC intentionally hires insufferable race-baiters to appear on its news spots, but one of their recent guests defied all sense of decency to such a degree with his comments on Louisiana Governor Bobby Jindal’s (R-aaaaacist Republican, obviously) comments on Muslim “no go zones, that I think it’s a fair question to ask.

From the Washington Free Beacon (emphasis mine):

“I think Governor Jindal is protesting a bit too much. He might be trying to scrub some of the brown off his skin as he runs to the right in a presidential bid,” said Iftikhar.

Wagner didn’t question his comment and the interview continued.

We could play the “If a REPUBLICAN said that…” game, but I think we all know how this story ends.

No worries Amy, I will say it for you.

MSNBC intentionally hires insufferable race-baiters to appear on its news spots and to host at least one show.

Governor Jindal is a Republican. Perhaps Mr. Iftikhar does not know this. Or perhaps he honestly thinks that brown people have no importance to Democratic voters.

Et tu, Iftikhar? And on MLK day, too.

I have two words to say about no-go zones backing up Gov. Jindal’s point.

Ready to hear them?

I have 2 words when it comes to islamic no go zones; “Carpet Bombing”!

Well, they do want more prayer rugs, so, by all means, it might be best to let them have it.

Bobby Jindal’s parents are from India. Hey, do you think that may be why he has a cleared eye appreciation of Muslim extremists?

Arsalan Iftikhar is of Pakistani descent. Hey, do you think that may be why he has an under appreciation of the danger of Muslim extremists?

A Muslim co-worker from India once told me a very poor joke: if you capture a Russian, an American and a Pakistani but you only have two bullets, what do you do? You shoot the Pakistani twice, just to make sure.

I hope that the next president bounds as closely as possible with India.

From what I’ve read, Pakistan is constantly plotting to bomb India off the map.

That Iftikhar seems to have a face made for slapping.

That screencap makes him look like he’s in mid-slap.

He’s a backpfeifengesicht for sure.

Iftikhar exhibits the world famous Islam supremacism which is often its most fierce when directed at those “who once were Muslim.”

That the Jindal family saw the light and became Catholic is especially bitter for a blowhard like Mr Muslim Guy= Iftikhar.

I hope I soon have a chance to vote for Mr Jindal for POTUS/VPOTUS.

I have always read that Jindal converted from Hinduism to Catholic Christianity. His parents’ names are Amar and Raj, according to Wikipedia; these are not Muslim names.

Mr. Iftikhar needs to scrub some of the brown off of his nose.

“Trying to scrub some brown off…”

This may be a bit off topic and I’ve beat this drum before, but just one more time. MSNBC is a disgusting organizaion, we’re all agreed. This rack record is now years – years – long. Everything it does – every single thing – is sanctioned by Comcast and GE. It’s long past time to go after these two enablers.

Time Warner is the cable provider where I live (and professor Jacobson’s as well, I believe). I have no use for Comcast as a business and do not want them as a cable provider on their lack of business merits alone. (The ONLY reason they want TW is for the NYC and LA markets) But, frankly, their continuous, open and unapoligetic support of the disgusting conduct of their on air personalities will send me elsewhere for cable service.

Requiring their on air personalities to clean up their acts would not be censorship, it’s simple civility. It is past time Comcast and GE were taken to task for their approval of this conduct.

Sorry for this interruption.

With a nod to Mark and Rush, PMSLSD.

The racism of the Left is bone-deep.