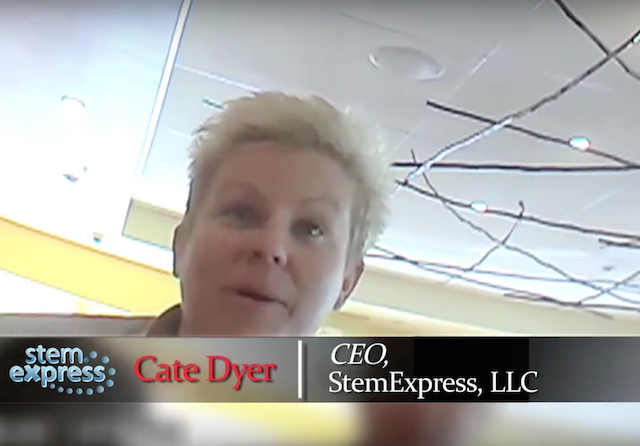 Immediately, CMP sprang into action, releasing a teaser of their next video ahead of any appeals filed by StemExpress.

On Friday, CMP teased quotes from the video’s transcript. In one segment, StemExpress CEO Cate Dyer jokes with the “buyers” about how some lab techs react to receiving fetal body parts in the mail. It’s horrifying [emphasis mine]:

Cate Dyer laughs and jokes about researchers being squeamish about receiving baby parts in the mail:

SE: As you probably know, one of the issues with neural tissue, it’s so fragile. It’s insanely fragile. And I don’t even know—I was gonna say, I know we get requests for neural, it’s the hardest thing in the world to ship.

Buyer: You do it as the whole calvarium.

SE: Yeah, that’s the easiest way. And we’ve actually had good success with that.

Buyer: Make sure the eyes are closed!

SE: They’ll open the box, go, ”Oh God!” [laughter] So yeah, so many of the academic labs cannot fly like that, they’re not capable.

Slicing the tension with a scalpel, this one.

Buyer: Why is that? I don’t understand that.

SE: It’s almost like they don’t want to know where it comes from. I can see that. Where they’re like, “We need limbs, but no hands and feet need to be attached.” And you’re like, ? Or they want long bones, and they want you to take it all off, like, make it so that we don’t know what it is.

Buyer: Bone the chicken for me and then we’ll—

It’s their lab—and it sounds like they know what sort of “science” goes on inside.

Buyer: But then it goes to that whole stigma.

SE: Oh yeah. And their lab techs freak out, and have meltdowns, and so it’s just like, yeah. I think, quite frankly, that’s why a lot of researchers ultimately, some of them want to get into other things. They want to look at bone marrow, they want to look at adipose- sort of adult human, kind of adult based sampling. They want to avoid publishing a paper that says it was derived from fetal tissue.

These people know what they’re doing. We’ve already heard several times over testimony from ex- StemExpress procurement tech Holly O’Donnell about how the work done in these labs is disturbing; she knew what she was doing was wrong, and based on this testimony, so do many more just like her.

We’ll keep you posted as more footage is rolled out.

Of note. Founder and CEO of StemExpress is the sister of Boehner’s adviser on medical issues. I can’t help but wonder if that contributes to his failure to do anything.

So what? What does that have to do with anything.

Stick to issues, not ad hominem attacks. The issues are devastating.

Well, it COULD have a lot to do with issues here, though by itself it would not. There are some very conservative lesbians in the world.

Conversely, there are some lesbians who are rad-fems of the worst stripe, as you’ll appreciate if you read Robert Stacy McCain. They tend to be misandrists and misanthropes, Marxists, and general nuts. They are all lesbians.

It would take knowing more about this particular person to know what her positions are. No pun intended…

Rags, I LOVE your puns! And not-to-be-overlooked, 99.9% of lesbians will never need abortions.

Well lesbians can abort” babies too….

Never could figure out why 2 thespians would need any of that – I mean can’t they just act it out?????

See, you and the Donald have a lot in common , contrary to your previous criticism of his character.

And are you as enthused with McCain’s views on inter-racial relationships as you are with his views on lesbians?

[T]he media now force interracial images into the public mind and a number of perfectly rational people react to these images with an altogether natural revulsion.

It has everything to do with it. I don’t care how convincing their “I’m just like you” acting performance is, they are immoral and deviant by definition. IOW, their “conservativeness” is feigned, not intrinsic.

Some of them are less harmful that others but none of them can benefit society. You cannot give of yourself if yourself is your main concern.

Whoa! Whoa!! Whoa!!! Many of them – and only God knows how many of them – were abused/neglected as children. Their families or other trusted people betrayed them. Many of them cannot help it.

So are they different? Yes. Are they mixed up? Yes. But I would never condemn them, because I know many are products of abuse.

No, they don’t tell us that, because it’s too traumatic and shaming to discuss. And I understand and don’t blame them for not wanting to disclose that. So, say they’re wrong, but don’t say they’re “bad.” Not their fault.

I did not condemn them – your contrary statement is false. I condemn and judge what they do and especially what they use to try to promote a false equivalence. Being an abuse victim is relevant to treatment and it is irrelevant to behavior and certainly irrelevant to the nature of the acts. Frankly, a person killed by a mentally ill person is equally dead with a person who fell down the steps and hit his head. You are focusing on justifying rather than guilt/innocence.

They CAN help it by not rationalizing that it’s okay. Ask Camille Paglia, who freely admits it’s a choice and that those who claim helplessness about it are disingenuous.

Conservative is not a set of skills which can be learned, though one can learn certain traits and then emulate those traits. That’s why so many actors are deviants – both areas require pretending to be what you are not.

(IANAL, obviously, but I used to watch a lot of Perry Mason.)

I have read and followed Tammy Bruce for many years, and appreciated her contribution to understanding how the “feminist” side of the Collective works, along with her strong conservative ideology.

Outrage is good. But will we entirely reject experimentation on aborted children and embryos grown in the lab? This is all eugenics, the same movement that inspired Sanger and Hitler. Pharmaceuticals use these babies to develop and test all manner of product lines, notably vaccines:
http://www.usnews.com/news/politics/articles/2015/08/11/medical-researchers-say-fetal-tissue-remains-essential

This is where Ben Carson shows his true colors as a eugenicist. It’s the gnostic Brave New World, experimenting, cloning, and profiting from murder. Will the current outrage die out? I suspect so. Do we wait to see on the grocer’s shelf “cream of fetus soup?” I don’t think even that will be enough to stop this cannibalistic madness.

Carson a eugenicist? I think you’re a little confused ~

Here’s Dr. Carson in his own words:
http://www.breitbart.com/video/2015/08/13/carson-i-have-not-actually-worked-with-fetal-tissue/

Carson added, “all pathology departments will have a whole array of tissues, from day one of conception until 99 years old. And if you use the tissue — if you’re comparing or looking for a disease process in elderly people, does that mean you’re doing geriatric research on geriatric tissue? No. It means you’re looking at your tissue, and you’re making comparisons to derive information, and those fetal tissues, by the way, come from a variety of different places, ectopic pregnancies, spontaneous abortions, but just because they get the fetal tissue, does it mean they should throw it out? Of course they don’t. That’s how science is advanced.”

“Certain communicable diseases have been largely eradicated by immunization policies in this country and we should not allow those diseases to return by foregoing safe immunization programs, for philosophical, religious or other reasons when we have the means to eradicate them.”

Carson defends the “advancement of science” brought about by fetal experimentation. This utilitarianism comes straight from the eugenics movement.

How is he wrong? What’s the difference between tissue from fetuses and tissue from any other cadaver? If you want to ban the use in research of all human tissue then you should renounce the benefits of all modern medicine. Don’t ever go to a doctor if you get sick, just lie down and die.

And what on earth is your objection to his very sensible position on vaccines?

Here’s the point. For fetuses to provide viable tissue, they must be harvested alive, in other words, aborted. If necrosis sets in, the tissue will not “work.” That’s the essence of the gory PP baby harvesting, the point that folks seem not to connect to fetal tissue research (FTR). The point of my comments, and picking on Ben Carson, is that being outraged at PP but supportive of FTR is an inconsistent position.

The rubella vaccine shot into most kids, the “R” of the MMR shot, was created by selectively aborting children of infected mothers. I guess I have a hangup with killing one kid so another may avoid a disease. Maybe you think that’s a good idea.

Why is it that opposing human sacrifice is equivalent to opposing modern medicine? Actually, you might be onto something. To be a good doctor today, must one be willing to sacrifice one patient to save another?

Wrong. And illegal, from what these videos expose.

What the heavily edited videos show is an attempt to distort reality by anti abortionist propagandists.

What the desperate comment shows is an attempt to ignore the wholesale slaughter and sale of unborn children.