These bumper stickers are revolutionary acts

These bumper stickers are revolutionary acts

In a time of universal deceit. 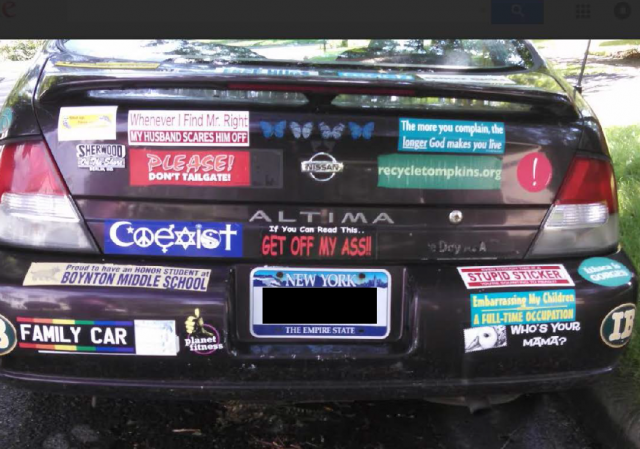 The third and last images from that Ithaca vehicle. (Part 1 and Part 2)

So why did this one take me by surprise given some of the non-politically corrrect (in Ithaca) bumper stickers?

It was the “COEXIST” sticker that I first spotted.

The “COEXIST” sticker is the gateway drug to a whole bunch of trite liberal bumper stickers to follow.

But not in this case.

One thing to note — the bumper sticker attributed a statement to George Orwell probably is a misattribution:

“In a time of universal deceit, telling the truth is a revolutionary act.”

“In a time of universal deceit, telling the truth is a revolutionary act.”

No, it isn’t. It means you are a right wing radical extremist! /s.

Professor, is there any way you can shift the skin ads above the comment section off the site or over to the side? I know of at least one woman who is really sick of seeing them! : )

Interesting that the Orwell “quote” most likely originated with communist radical Antonio Gramsci.

It takes a special kind of mental illness to do that to a car.

Really? What about Japan?

Funny she has a thing about tailgating and then plasters her car’s butt with bumper stickers that undoubtably contribute to tailgating.