How could this happen?

How could this happen? 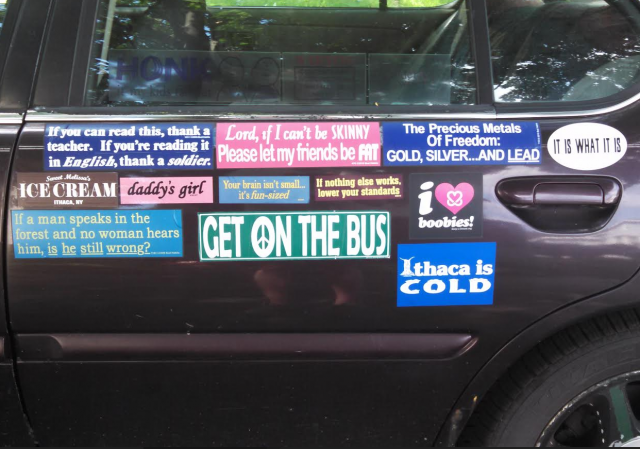 Saw this vehicle in Ithaca recently.

When I snapped the photos, I just assumed from some of the stickers in the rear of the car that it was just a typical Ithaca liberal collection.

I’ll run those rear stickers in a later post.

But as I took a closer look at the photos, some of these stickers surprised me…

…  that someone was willing to wear them on her car … in Ithaca.

Or, another confused libertarian?

There are signs of intelligent life in Ithaca!

I don’t like those “If you can read this, thank a teacher” bumper stickers. There are plenty of us who learned to read on our own, quite independent from the meddling of teachers, thankyewveddymuch ~

True, and reading should be the most elementary instruction. Yet over the years as unions made sure teachers retired earlier with more, and bad teachers could not be fired, the question became “why can’t Johnny read?”. If Johnny can’t read, blame a Democrat. If they are closing charter schools because they make the incompetents look bad, blame a Democrat.

The military is a federal job, but teaching should be locally controlled. That sticker doesn’t quite call them both federal, but it seems to be intended.

Ike’s proto step did not Federalize education, but it did allow JFK and LBJ to do so. It was forced busing that did in local schools. The recovery as of today is only via private, charter, religious and home schools. The public education system in any part can not be saved.

The ‘system’ might have survived, but two generations of disfunctional students – and especially their parents (if they even know them) – along with liberal tolerance, have doomed it.

Aye, decent mothers and dads are the bigger factor in reading.