Hillary’s stock in a free fall

Last month, we introduced this year’s edition of the Hillary Meter to regularly update public perceptions of the former first lady on her march to the White House. Why a Hillary Meter and not one for, say, Jeb Bush or Donald Trump? Because for one thing, Clinton is far and away the leader in the race for next year’s Democratic nomination, while the winner of the Republican race is anyone’s guess. Secondly, the former first lady, U.S. senator and secretary of State is an internationally known and highly polarizing figure – greatly admired by many on the left, extremely disliked on the right – who may end up being the nation’s first woman president.

The Hillary Meter is not indicative of who surveyed likely voters want, but rather who they believe will win. Also of note is that individuals surveyed are likely voters and not registered voters. Likely voters tend to (but not always) have a lower propensity for election day turn out. Though the Huffington Post argues that if 2014 is indicative of future elections — that distinction might not make much difference any longer. 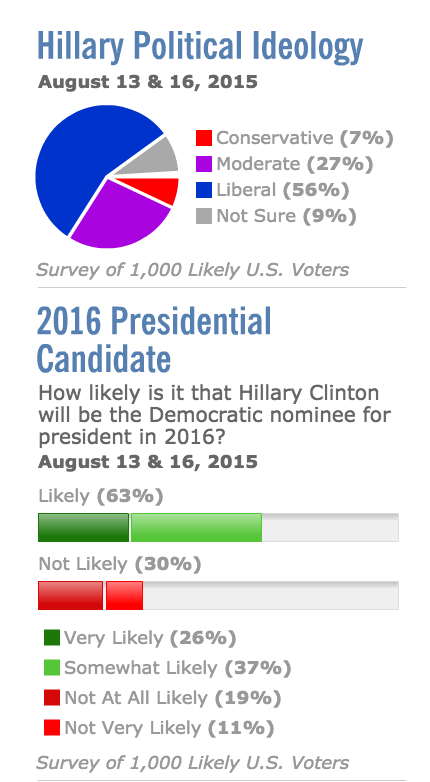 In the face of increasing legal questions about the safety of secrets on the private e-mail server she used as secretary of State and of a vigorous intraparty challenge from Bernie Sanders, belief that Hillary Clinton is likely to be next year’s Democratic presidential nominee has dropped noticeably over the past month.

The latest Hillary Meter shows that 63% of Likely U.S. Voters believe that Clinton is likely to be the next Democratic presidential candidate, but just 26% say it is Very Likely. That compares to 78% and 43% a month ago. Thirty percent (30%) consider that outcome unlikely, with 11% who feel it is Not At All Likely. That overall figure is up 10 points from the previous survey.

And so Hillary’s stock continues to plummet. Potentially more devastating? Hillary hasn’t testified before the House Select Committee concerning her email handling yet. That hearing is currently scheduled for October 22.

I was reading something somebody wrote somewhere that it wasn’t impacting this question of how inevitable she is, (because nothing was making Bernard Sanders or anybody else probable) but you can see it is beginning to make an impression on people’s judgment of the future..

The poll did try to make the movement look bigger than it is so far. It’s not quite an avalanche!

15% dropped all the way to at least Not Very Likely.

Not At All Likely is actually the lowest category, but is listed third here.

I heard the grudging admission on some news program a few days ago (maybe Meet the Press) that if she’s the candidate, Democrats will vote for her.

Hillary’s stock has moved well below the 200 day moving average.

The trend is not her friend!

With all due respect to Rasmussen, “likely voter” screens aren’t very accurate this far from voting. They will generate a better sample than “registered voters,” because the top indicator has always been if they voted in the last election, but it is nowhere near the sample they can screen in the last month before the vote.