Not if they’re Republicans 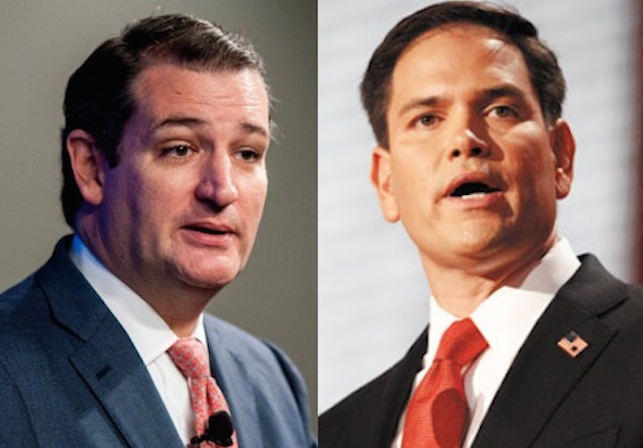 I believe that the only thing that can stop Clinton is an indictment, or the entry of Elizabeth Warren into the race. That’s how shallow the Democratic bench is and how much the public (especially Democrats) seems to thirst for another “first,” as they did with Obama. The first woman president is the next logical step for them, and Hillary seems (or seemed until recently) to fit the bill.

That’s one of the reasons Carly Fiorina is an especially good foil for her. I don’t doubt, however, that if Carly were to rise in the polls and become a strong possibility for first female president, the attacks on her as “not a real woman” would become the drumbeat of the opposition.

Isn’t it interesting that this year we also have two—count ’em, two—major presidential candidates who are Hispanic? I don’t recall even one major candidate who was Hispanic in previous years, although it’s possible I’m forgetting someone. But do we hear any paeans of praise for Cruz’s or Rubio’s minority status in the MSM or from liberals? Of course not; don’t be silly. They are Republicans. Cruz in particular is an arch conservative, and Rubio only somewhat less so. In the eyes of the MSM that de-Hispanicizes them. And Cruz, of course, is only half-Hispanic—just as Obama is only half-black, which you don’t hear much about from the left, unless it’s the left that thinks he’s not leftist enough.

Cruz and Rubio don’t appear to be emphasizing their Hispanic origins all that much; Jeb Bush seems to be going further with his status as an honorary Hispanic. But just imagine for a moment if either Cruz or Rubio were liberals. You know what a wonderful thing their candidacies would be.

Same for Bobby Jindal, first person of Indian descent to be a viable candidate for the presidency. And Romney, who was the first Mormon nominee for president, was not lauded for that fact, either (he wasn’t the first Mormon major presidential candidate; I believe that honor may have belonged to his father George). Mormons, of course, are most definitely not a liberal special interest group, although they certainly are a minority group in terms of numbers.

Interestingly enough, you also hear very little from liberals about the fact that Bernie Sanders is Jewish, because being Jewish is not considered by the left to be a selling point and Jews are not considered to be oppressed; au contraire. Nor is Sanders the first major candidate who’s Jewish. We even had a previous Jewish vice-presidential nominee, back in 2000 (what now seems like centuries ago), when Joe Lieberman was the VP nominee of the Democratic Party. Not long after that he became a party pariah when the Scoop Jackson wing was banished and foreign policy hawks were disallowed.

How truly racist is it that someone’s heritage (aka ethnicity) is not considered “authentic” if that person doesn’t toe the leftist-defined beliefs, attitudes, and ideologies they DEEM must be so?!

If the MSM wasn’t all of the same ideological bent, there WOULD be outrage at the blatant prejudice, bigotry, and racism by defining “acceptable” stereotypes of certain people!!

No the comments against Carly would be about her nearly sinking HP through her managerial ineptitude.

Plus,, she’s a skinny twerp who’d be as presidential as a model spokeswoman in a ad for the Pink Pill. What’s with those bony shoulders?

I can’t wait to hear how The Donald describes her.

So you like those fat girls in pants sui

I don’t know what happened here. I started typing and my comment disappeared. So I started typing again. When I hit submit both typings somehow got mixed. Horribly. And my computer started acting up. So I shut it down and went to bed. Works OK today. Sorry.

Willing to bet that is going to disappear when you figure out trump is going… to clobber you democrats commies.

I’m an Independent Commie, who supported McCain in the 1st Obama election.

And if it came down to Trump vrs Clinton, I absolutely would support the Donald.

But if it came down to Donald vrs Bernie, I’d go for the old Jewish guy from Brooklyn, because a Jew as president of the US would really drive the Radical Muslims crazy.

No such thing as an independent commie. Communism and socialism require absolute state control over resources.

I don’t know what Bernie you are talking about, but a Jew for prez would have an entertaining effect on the Moslems.

I thought Huey, Dewey and Louie added to Donald’s appeal.

Yes. Why would you think otherwise?

And what took him so long to become naturalized?

What is “so long”? Why should he have gone any faster? What difference would it make if he never became naturalized?

And what took Cruz so long to renounce his duel citizenship?

Me: Cruz. – was his father in the U.S. Legally?
You: Yes. Why would you think otherwise?

Because he seems like a con artist who can’t be trusted, who’s speaking on behalf of his son, who wants to be president, making speeches that affect the national political landscape.. Don’t you think it’s fair to scrutinize Papa Cruz’s early visa claims, to see if they’re accurate or not? If Cruz was a Democrat and his father had a questionable past, wouldn’t you be interested in knowing about it?

And if Papa claims to love America so much, why did he immediately become a Canadian citizen upon moving there, but waited more then 30 years after moving back here to become an American citizen?

You think politics may have had something to do with that?

What the **** are you talking about? There’s nothing questionable, nothing to scrutinize. It’s undisputed that he was a student at the University of Texas; that made him eligible for a student visa, so why would you suppose he didn’t get one? Then when Castro took over in Cuba, any Cuban here automatically qualified for a green card, so why would you suppose he didn’t apply for one? It would have been extraordinary for him not to. And of course, even if none of that were true, once he married an American he would have been eligible for a green card that way. One way or anothere there’s no reason in the world to doubt that he had one. You’re just trolling.

Why did he wait 30 years to become a US citizen? Why not? There was no reason for him to do so. As a Canadian citizen with a green card, there was nothing a US citizen could do and he couldn’t, except vote. So if he had no interest in voting, why bother? What do you mean by “You think politics may have had something to do with that?” How could politics have anything to do with his not naturalizing sooner? Do you think he was voting in Canadian elections all that time? (If he was, so what? Why would that be a problem? But I don’t suppose he was.)

The question should be whether Cruz’s father was in Canada legally, as that is where Ted was born. I believe he was a legal alien Cuban refugee at the time, which means Ted is not qualified for the presidency per the NBC clause.

Barry never renounced his UK and Colonies citizenship. On his campaign website in 2008 he claimed his failure to claim it at age 21 means it automatically expired. That entry got scrubbed.

Both of Rubio’s parents were noncitizen refugee Cubans at the time of his birth: non-NBC.

Whether Cruz is a natural born citizen of the USA depends on how you define that term. If it means born under the protection of USA law, as Blackstone defines “natural born subject”, then no, he isn’t. If it means a citizen at birth, then yes, he is.

So what? In any event, he’d probably have lost it when Kenya became independent.

On his campaign website in 2008 he claimed his failure to claim it at age 21 means it automatically expired.

Maybe. Do you know that not to be the case? Are you an expert in Kenyan citizenship law? But even if it’s not true, even if he’s Kenyan citizen to this day, so what? How does it affect anything? The constitution doesn’t bar dual citizens from the presidency.

Both of Rubio’s parents were noncitizen refugee Cubans at the time of his birth: non-NBC.

Bulldust. He was born in the USA, so by any legitimate definition he’s a natural born citizen.

What’s more (although this seems hard to believe as well), 55 years later he remains the only Catholic president.

True enough. Catholics don’t dominate the Executive; they save that for the Supreme Court, with a 6/3 Catholicism/Judaism split.

Look real close. These are WHITE Hispanics just like George Zimmerman. They don’t qualify as victims. Neither do Uncle Toms like Carson and Justice Thomas.

They’re not white, but they are “White-Hispanics”. In the Latin world, “white” is a relative, descriptive term, not a racial designation.

Mr. Binks – Here on LI I presume your goodwill.
But back when the NY Times tried to smear George Zimmerman as a “white Hispanic” it was an act of pure vitriol, a vicious effort to foment race hysteria. The NY Times is hard left partisan and no longer merits presumption of sincerity.
Likewise when the NY Times tried to distinguish “African Americans” (without hyphen, e.g. Jamaican) from “African-Americans” (with hyphen), because only the latter, not the hard working former, deserve affirmative action preferences.

I agree wholeheartedly with your reply. What the MSM did to Zimmerman was disgraceful. I simply wanted to point out that they’re doing somewhat the same thing to Cruz and Rubio, despite their names and lineages. I was also pointing that “white” doesn’t necessarily mean the same thing in Latin America as it does in the Anglosphere. In Spanish, “blanco” is the color of snow, and a white person, or relatively white person, is a “guero”, whether or not he is a “gringo”. Then, of course, there’s “rubio”, which means blond.

First Hispanic presidential candidates? You’re forgetting about Matt Santos. He not only ran, but won!

back in 2000 (what now seems like centuries ago), when Joe Lieberman was the VP nominee of the Democratic Party

And he might have become the Republican nominee for Vice President in 2008, only 8 years later (making for another first) – McCain wanted him, but he became convinced that the convention might accept him, or it would cause too much cntrovrsy, so he picked the person he liked best among the people who had been thoroughly vetted: Sarah Palin.

For weeks, advisers close to the campaign said, Mr. McCain had wanted to name as his running mate his good friend Senator Joseph I. Lieberman of Connecticut, the Democrat turned independent. But by the end of last weekend, the outrage from Christian conservatives over the possibility that Mr. McCain would fill out the Republican ticket with Mr. Lieberman, a supporter of abortion rights, had become too intense to be ignored.

I don’t recall even one major candidate who was Hispanic in previous years, although it’s possible I’m forgetting someone.

I was gonna say, but you beat me to it. And the media had no trouble identifying him as Hispanic or Latino, despite his name. Times have changed.