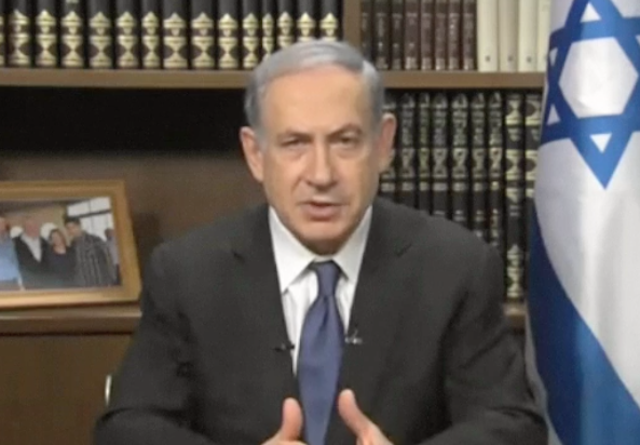 Yesterday, Israeli Prime Minister Benjamin Netanyahu hosted a webcast with American Jewish participants urging them to oppose the Iran nuke deal. His message reached an estimated 10,000 people, and served as a counter to propaganda spread by pro-deal activists plying the media with misinformation about the motive behind Israel’s opposition.

From the Washington Examiner:

The Israeli Prime Minister, who spoke Tuesday afternoon on a video conference organized by the Jewish Federation of North America, pled with the nearly 10,000 participants to actively speak out against the deal. “The days when the Jewish people could not or would not speak up for themselves, those days are over,” he said. “Today we can speak out. Today we must speak out. And we must do so together.”

Netanyahu, who has been an ardent critic of the deal argued that the agreement would bring Tehran closer to producing a nuclear weapon. “The nuclear deal with Iran doesn’t block Iran’s path to the bomb,” he charged. “It actually paves Iran’s path to the bomb.” In the prime minister’s estimation, if Iran upholds the agreement it could obtain a nuclear weapon within 15 years.

Toward the end of the webcast, PM Netanyahu took questions from participants. Via The Tower:

When asked if there was any deal he would accept, Netanyahu said that he would have accepted a deal that allowed Iran a much lower level of enrichment and made sanctions relief contingent upon Iran changing its behavior. He also pointed out that while proponents of the deal are now saying that the alternative to the deal is war, the administration was saying just a a few weeks ago that the alternative to a bad deal is no deal.

Netanyahu was also asked how he thought Congressional rejection of the deal would effect negotiations. He answered that the sanctions were supposed to make Iran have to choose between its nuclear program and commerce, but that the deal gave them both so that “Iran could have its yellowcake and eat it too.” Netanyahu acknowledged that sanctions could be weakened in the short term by Congressional rejection of the deal, but that the American economy was 40 times the size of the Iranian economy, so businesses, when forced to choose, would choose to do business with the United States.

Meanwhile, President Obama made his case for the deal in a smaller, less exposed setting: he hosted Jewish leaders on both sides of the issue in a closed meeting at the White House. The Administration is preparing for Congress to vote against the deal, so they’re focusing their efforts on trying to convince Democrats not to turn their backs on the party.

White House Press Secretary Josh Earnest told members of the media that the President is confident that he can maintain against an override in the House; the Senate, appears to be a less certain, although Sens. Barbara Boxer, Tim Kaine, and Bill Nelson came out in favor yesterday.

The Administration lost the support of Reps. Steve Israel, Nita Lowey, and Ted Deutch, all three of whom are important Jewish representatives and highly influential in the House chamber. New York Democrat Chuck Schumer, who is widely understood to be next in line to take Harry Reid’s place as leader of the Senate caucus, is showing the strain surrounding what has been called the biggest vote of his career. He reportedly “lost it” in a closed meeting with prominent Jewish leaders, and has refused to hint which way his vote will fall next month.

The cracks are showing. Keep pushing.

If there are American Jews who are…in ANY way…confused about the intentions of Pres. ScamWOW towards Israel at this point, they are pure-d Collectivist delusional.

Vote against the Iranian crapsandwich and lose the future leadership position.

Vote for it, and face not being re-elected.

What a stupid, naïve take on how this is going to go down.

The Democrats only need 34 votes to keep a veto from being overridden.

So vulnerable Democrats like Schumer are going to be ‘allowed’ to vote against the bill and act like they are actually doing something.

They do shit like this all the time (and so do the Republicans).

Schumer voting against his doesn’t really hurt his leadership prospects, but it does hurt his relationship with Obama.

“The ayatollah constantly believed that we are untrustworthy, that you can’t negotiate with us, that we will screw them,” Kerry said. “This”—a congressional rejection—“will be the ultimate screwing.”
http://www.theatlantic.com/international/archive/2015/08/john-kerry-interview-iran-nuclear-deal/400457/

Does Kerry know there’s now even a lawsuit designed to block the sanctions relief?

19. Plaintiffs are entitled to enforce their judgments against the blocked or frozen assets of Iran pursuant to, inter alia the Terrorism Risk Insurance Act (“TRIA”) § 201.

Basically, the claim is that some of the sanctions Obama wants to remove, are there ALSO because of support for terrorism, and cannot be removed by the nuclear deal.

35. Based on that Section 311 Patriot Act finding, Congress enacted Section 1245 of the National Defense Authorization Act (NDAA) of FY2012, as amended by Section 504 of the ITRA, which provides for sanctions against foreign financial institutions conducting transactions with the Central Bank of Iran and other Iranian financial institutions subject to United States sanctions. Congress has provided that these sanctions shall terminate if the President submits a certification to Congress that, inter alia “the Government of Iran has ceased providing support for acts of international terrorism and no longer satisfies the requirements for designation as a state sponsor of terrorism.” CISADA Section 401, cited as 22 U.S.C. § 8551(a)(1) .

36. In connection with the Section 311 Patriot Act finding, Iran was also removed from the SWIFT (Society for Worldwide Interbank Financial Telecommunication) global payments system in 2012.

But – the JCOPA calls for lifting those sanctions!

The contention of the plaintiffs is that Obama cannot removed some sanctions, short of removing Iran from the list of countries supporting terrorism. But Obama has actually conceded that Iran will continue to sponsor terrorism.

So pursuant to MANDAMUS ACT 28 U.S.C. § 1361 they want to block the sanctions relief (or collect their money, which is what gives them standing – see number 61ff.)

Besides the injunction, they also want a jury trial for anything triable by a jury.

Although the person who used to say that was not a very honest member of Congress.

“The ayatollah constantly believed that we are untrustworthy” Kerry said.

I don’t often find myself in complete agreement with the Ayatollah, but when he’s right, he’s right.

Huckabee was absolutely right. But his comment hit so hard that the collectivist media had to try to ridicule it to protect Obama and Kerry.