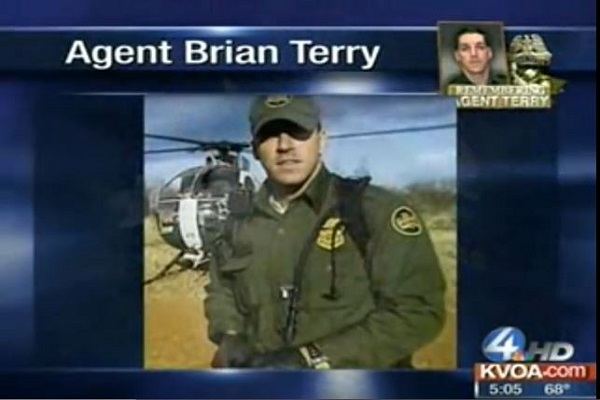 In no small part because this administration seems to dish up scandal and outrage on a seemingly weekly basis, the Fast and Furious scandal has yet to be fully investigated or resolved.  After Eric Holder cleared Eric Holder of any wrong-doing, and the mainstream media outlets began reporting, erroneously, that Fast and Furious was the same program that began under President Bush as Project Gunrunner, the story sort of faded from the public eye.

Apparently intended by the Obama administration to, at least in part, serve as a rationale for more gun control regulations in the U.S., Operation Fast in Furious is back in this news.

Last week, it was reported that the Garland, Texas terrorist, for whose acts ISIS claimed credit, purchased a gun through a Fast and Furious gun shop in 2010.

And this week, we learn that the man charged in the murder of Border Patrol agent Brian Terry has received a plea deal from the U. S. government.  KVOA in Tuscon reports:

One of the men charged in the murder of U.S. Border Patrol agent Brian Terry pleaded guilty to one count of murder, Monday morning. Once a potential candidate for the death penalty after the murder of the agent, the drawn up plea deal now states that the U.S. and the defendant will ask for 360 months imprisonment, with credit for time served since his arrest in October 2012.

. . . .  As part of the plea agreement, the United States agreed not to execute Burboa and to dismiss all other charges against him, including charges of interfering with federal officers and killing Terry with “malice aforethought” the second charge in the superseding indictment.

The plea deal also notes that Burboa had already been ordered expelled from the U.S., though it is not clear if the expulsion order derives from Terry’s murder or from a previous crime.

Burboa’s 30 year sentence is in line with the sentence handed to Manuel Osorio-Arellanes, the man wounded during the firefight. Osorio-Arellanes faced life but was ultimately sentenced to 30 years in 2012. Jaime Avila, Jr., the Operation Fast and Furious gunbuyer who purchased the two AK-47s found at the murder scene was also sentenced in 2012. He received a 57 month sentence.

The following video is of a local newscast covering the memorial for Brian Terry in 2010:

Twitchy has some of the Twitter responses to the plea deal:

Instead of life or execution, US quietly asked that man charged in Terry’s death get 30 yrs in prison w/time served http://t.co/YTLxrvNNwe

Another travesty from Obama's Department of Injustice #rememberbrianterry #FastAndFurious ==> https://t.co/l3f5NLWV4g

@michellemalkin What a travesty.But the DOJ was Afraid That real Story of Fast & Furious would come out in open court

@michellemalkin I am surprised Obama didn't give the murderer an award and pardon him, maybe give him a green card too @BarackObama

Obama and Holder will send in another ‘hamburger helper’ to help the stooly escape and then…oops, there goes another Fast and Furious victim.

A question I have is, “What was behind offering this phuc a plea deal?”. Was it being afraid of the defense’s discovery, and its exposure in open court?

Tsk tsk, young man. We can’t allow exposure of information that might compromise the security of our nation’s corruptocracy.

The Bush Administration program was called “Operation Wide Receiver”. It was started and very quickly ended after they found that technological shortcomings (mostly pertaining to highly-limited battery life in location tracking devices) rendered the goals impossible to achieve.

One key difference (that you’ll never hear the media talk about) is, the Bush Administration tried to track a couple hundred guns, and ended the program when they weren’t able to track them effectively. The Obama Administration released a few thousand guns to the cartel buyers over a longer period of time, didn’t even try to track them, and only ended the program when they got caught.

(Rumor and speculation say the intent was to track them as they turned up at murder/massacre scenes, which is a pretty grisly way to run a “sting operation”. Speculation also says the media byline — that it was a “botched sting operation” — is false; it did exactly what it was supposed to do: release American-bought guns to Mexican drug cartels, to pad trace statistics and justify enhanced restrictions on American gun buyers and sellers.)

And, most importantly, nobody under the Obama Administration has been fired or disciplined in any way.

As an aside, I’d be willing to bet the guys convicted and currently serving their sentences for their parts in Brian Terry’s murder will not be deported afterwards.

Sanctuary, amnesty, and all that.

“I am surprised Obama didn’t give the murderer an award and pardon him, maybe give him a green card too.”

Don’t give him ideas, he still could.