Jindal: If Elected President, Will Send the IRS Into Planned Parenthood

Jindal: If Elected President, Will Send the IRS Into Planned Parenthood

Do the ends justify the means? 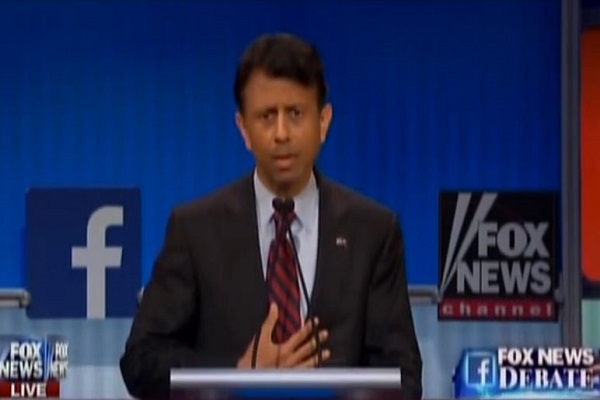 When Lois Lerner preemptively “broke” the story in 2013 about the IRS targeting conservative groups from (at least) 2010 to the time leading up to the 2012 presidential election, there was outrage and a bit of curiosity because it was she, then director of the Exempt Organizations Unit of the IRS, who admitted to these illegal actions.  Four days later, the Inspector General’s office issued a report confirming the targeting, and three years later, we are learning of additional targets such as Bristol Palin.

After his initial feigned outrage, Obama, of course, is adamant that there is not a “smidgen of corruption” at the IRS, but that remains to be seen as reports of ongoing IRS targeting of conservatives emerge.

Conservatives were—and are—justifiably outraged at such a blatant and illegal weaponization of the IRS against those whom Lerner and others in the IRS, perhaps on up to the White House, deemed threatening or otherwise “enemies.”

Public trust in federal government, generally, is very low in part because of this type of perceived corruption of the IRS and other executive agencies.

So you have to wonder what Governor Jindal was thinking when he stated during Thursday’s debate that if elected president he will send the IRS after Planned Parenthood:

Louisiana Gov. Bobby Jindal said tonight that the Planned Parenthood scandal is “absolutely disgusting” and the organization needs to be defunded.

“Planned Parenthood had better hope that Hillary Clinton wins this election,” Jindal said, guaranteeing that if he’s elected president, he will send the Department of Justice, the IRS and every other possible agency after them.

I get that he, and we, would like to see Planned Parenthood defunded.  I would love that.  Love. It. I also understand his ordering investigations into Planned Parenthood in Louisiana following the vile and horrendous videos that have been released; however, he also says that he wants to use the federal government to target Planned Parenthood because the organization offends “our values and our ethics.”

Is it ever okay to send the IRS—DOJ, FBI, NSA, EPA, ITF, etc.—”after” those targeted by the president, those who offend the values and ethics of the president?  Do the ends justify the means in this, or any, case?

The question is whether indiscriminate killing (e.g. abortion) of wholly innocent human lives should be abolished through executive, legislative, or judicial action. Or perhaps through a popular consensus. And, in the case of Planned Parenthood, if they should be rewarded with incentives (e.g. trophies) to contract for killing and resale of their remains.

I would settle for just keeping the IRS AWAY from those who oppose PPH.

On the money and good on you for it.

Not so fast, Fuzzy.

Your implication is that Jindal would CORRUPTLY use the agencies, as has Barracula and his Obami.

But there are totally legitimate functions of, say, the DOJ, many of which we’ve just grown used to NOT seeing.

While the tax code SHOULD be burned to the ground, as it stands now the IRS very well should be investigating EVERY entity under its mandate. Certainly one so corrupt as this one.

Several states are now investigating Planned Abortionhood, and the DOJ SHOULD be, as well. There are several apparent violations of Federal and state laws here.

I think if you listen carefully to Jindal, he does not suggest he’d use the Agency State to defund Planned Abortionhood. He DOES say it should be defunded. But that would be a new paragraph, if written.

Ah, most excellent point, Rags! The nagging worry I have, though, is that at the end of the day, the IRS is going to be found acting within its lawful boundaries in targeting us. I mean, it technically CAN inspect any application it wants, audit whomever it wants . . . .

I am totally for the states investigating Planned Parenthood for illegal activity following the video releases. Frankly, I’m pretty appalled that my own governor (Scott-FL) and Jindal were funding that travesty of a death squad in the first place. With all the talk of defunding Planned Parenthood, I didn’t look at what the states are doing to enable them. (My bad)

And to the point: no, he doesn’t say he’d use it to defund Planned Parenthood. But that, to me, is the actual problem. He’d be using, and of course this is all hypothetical at this point, his power as president to send his thugs at the IRS after an organization that, if engaged in illegal activity (as it seems they are), would not have to “answer” to the IRS.

That’s a small slope to slip to sending it after other groups who offend his–or whomever’s–values and ethics . . . history makes me worry about such things, Rags. What can I say? 🙂

I’m just a bit confused by your response on a couple of points, Fuzzy.

First, every time law-enforcement is used in a directed way by an executive, it necessarily involves “groups who offend his–or whomever’s–values and ethics”. Usually, those are values and ethics on which the laws themselves are based, and are consistent with the American polity. This regime has been a glaring exception, and the only one in many decades. Nixon tried it, and was told to peddle his papers.

“I mean, it technically CAN inspect any application it wants, audit whomever it wants . . . .”

Sure. What it CANNOT do is show a pattern and practice of using any of its power to target a political movement or individuals in it. This is like saying that the state police can ticket any violators, then having them issue special plates to Tea Party people and making a practice of ONLY ticketing them. The issue isn’t ever with an impartial, unbiased exercise of these enforcement powers (for most of us). It is with a patently politically biased CORRUPT use of the powers.

What’s interesting to me about American history is that there really has been relatively little of that kind of thing (not that there’s been none).

But we agree, I think, that the Agency State has to be very largely dismantled, especially at the Federal level. When there are fewer levers to pull, there is less temptation to pull one, and it’s more obvious.

A politicized and corrupt IRS is a far greater danger to the American experiment than are those medical perverts at PP. It is vital that government offices like the IRS be reigned in and the miscreants responsible for regulatory perversions penalized.

The current corrupt, vicious, Politbureau-esque IRS seems unsuitable for any sort of law enforcement. Perhaps a cleaned-up and revitalized IRS could be the tool used to limit PP’s depredations … but fixing the IRS will take a while, even if anyone in Washington should feel like actually doing it. In the meantime, PP will continue to run amok.

I would like to see a President address both these problems, but not to make work on one of them contingent on success in dealing with the other.

Yep. The current IRS…and some escapees like Lerner…should be investigated to criminal conduct and put away. That should have a sobering effect on what remain.

Then, we should repeal the Sixteenth and start with a clean sheet of paper…on which most of the new tax code should fit.

I humbly suggest that sending in the IRS is a weak gamble at best:
a) Immediately stop all taxpayer funding.
b) Have the states conduct criminal investigations (I do not trust any federal LE agency any more)
c) Shut down the IRS

The IRS is corrupt. They will not conduct an objective investigation for at least 10 years after the purging begins — perhaps not even then.

Do you think that maybe the IRS already knows what PP is and that is OK with them?

All Mr. Jindal is doing is showing his willingness to use government agencies as weapons against those he opposes. In recent history, Johnson had the FBI record MLK’s bedroom gymnastics; Nixon used the IRS against all manner of “enemies”. Jindal is no better.

The IRS needs to be brought into line, but the only way to do that is for the next R president to openly use it on the Ds and their key constituencies, to hit them twice as hard as they hit us, while continually reminding the public of what they did. And when those audits actually find criminal activity, that will retroactively justify them. But when the outcry about politicizing the agency rises to a high pitch, turn around and say “OK, you hate being on the receiving end of this treatment; do you hate it enough to join me in ending it once and for all? Will you join me in reforms that are permanent and enforceable against future administrations?”

Meanwhile the new IRS commissioner needs to go through the audit records of the past 8 years, and also those of the Clinton years if they haven’t been shredded, with a list of prominent conservatives and conservative entities that were audited, and find out in each case who decided on the audit. Surely a pattern of criminal activity will emerge, which can be exposed.

As far as Planned Parenthood is concerned, the next president would be justified in sending every agency to pick them over because there’s objective reason to suspect them of criminal activity. This would not be politically motivated; it’s not like auditing Kos or the NAACP, it’s like auditing a known crime figure.

First, get a copy of the IRS org chart. The fire the three top layers. The IRS is a rouge organization that needs to be taken down.