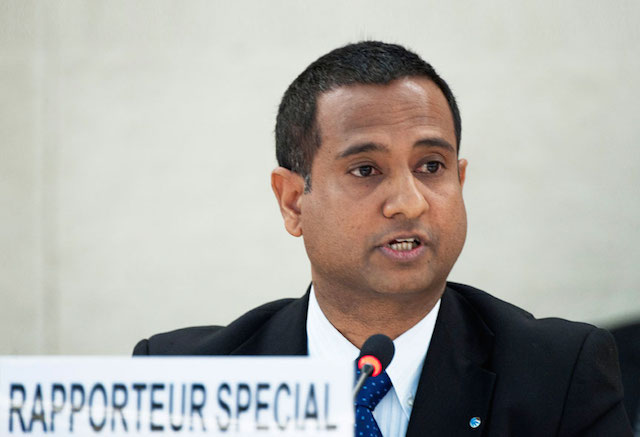 Yesterday, we posted about Iran’s latest—and blatant—two-fold attempt to undermine the United States’ moral authority and intimidate Jews living in Israel. The content of Ayatollah Ali Khamenei’s 400-page screed on the inviability of both western hegemony and the state of Israel wasn’t particularly shocking, but it should serve as yet another wake up call for those who think it’s within the realm of possibility for Iran to play by the rules when it comes to human rights, international relations, or even a budding nuclear program.

For their part, Iranian officials are determined not only to flaunt the rules, but to make sure that those violations never make it onto the record. They’ve launched a smear campaign against Ahmed Shaheed, the United Nations special rapporteur on the situation of human rights in Iran.

In a concerted effort aimed at discrediting Ahmed Shaheed in the eyes of the general public, Iranian state-run agencies and semi-official websites simultaneously carried articles claiming that the Saudi embassy in Kuwait had paid the UN envoy $1m to take an anti-Iran position. It dominated many Iranian front pages on Tuesday and an Iranian official later used the false information to question Shaheed’s credibility.

The allegations are based on what is claimed to be a WikiLeaks cable the authenticity of which has been challenged by the organisation itself. “Please show which cable this claim is based on. You fail to link to one of our cables in the article,” the official account of the WikiLeaks tweeted in response to a website carrying the news. Shaheed has also strongly denied the claims.

Back in March, Shaheed spoke before the UN Human Rights Council about an alarming rise in government executions in Iran, as well as an uptick in the jailing of journalists, lawyers, and activists. He also testified to the increasingly precarious situation women and minorities find themselves in.

More from the Guardian:

Shaheed called on Tehran to “declare immediately a moratorium on executions”.

The UN expert, a former foreign minister of the Maldives, also lamented that Iranian authorities “continue to harass, arrest, prosecute and imprison many members of society who express criticism of the government or publicly deviate from officially sanctioned narratives”.

Iran is one of the countries in the world that imprisons most journalists, he said.

Journalists, as well as activists, lawyers and opposition politicians are often charged with breaching a range of national security laws, including on propaganda against the system, and offending government leaders, he said.

Many had hoped that the election of President Hassan Rouhani, regarded as a moderate, would lead to improvements in the human rights situation in Iran.

But Shaheed said the deterioration he had seen may have come because “hardline” elements in the country “want to undermine the president’s image as a reformist”.

Last year, at least 753 people were executed in Iran; this year, the Iranian government executed 694 people between January 1 and July 15.

After Iran and the west came forward with the JCPOA on Iran’s nuclear program, Shaheed spoke out against the status quo and admonished Iran’s leaders to acknowledge their human rights violations:

“Peace, development and human rights are deeply interlinked,” declared UN Special Rapporteur Ahmed Shaheed, who is mandated by the UN Human Rights Council to monitor and report on the situation in Iran, in a news release issued earlier today.

“It is my sincere hope that the successful conclusion of the nuclear talks, which will enable the lifting of economic sanctions, will allow President Hassan Rouhani to focus on his other campaign pledges, specifically those to promote the enjoyment of all human rights by the Iranian people.”

Shaheed has consistently spoken truth to power on the human rights crisis in Iran, and now Iran is fighting back—is anyone surprised by this?

Iran is a wannabe Nazi state. The only way to stop them is war. They have never given in to anything as the recent nuclear negotiations have proven. They can only be forced and the top mullahs will have to be killed. Nasty business, but it is better to take action now rather than later. Hitler could probably have been stopped in ’35, ’36 or ’37 before he rearmed Germany. Iran is being given $150 billion and it will go to arming itself, Hezbollah, Hamas and the Houthis. It will be harder to stop them after they have spent the money. Especially in a conventional war.

Much has been written recently comparing the proposed agreement with Iran and Chamberlain’s treaty with Hitler and paralleling today’s circumstances with those of the late thirties. There is much in common but of particular note is the similarity of Hitler and his group and the Iranians; they were and are dishonest, dishonorable, murdering, cold blooded tyrants of the highest order. We should not enter into any kind of an agreement with them. Period.

To say that there are similarities between Obama and Chamberlain would be unkind to Chamberlain.

Not to mention that they both made a big deal of their claimed descent from the Aryans.

He was overthrown by the British in 1941.